My friend E. roped me into—I mean, inspired me to join her for a quilting block of the month challenge.  We started in June, and we’re both doing different foundation paper pieced blocks each month.

Foundation piecing is one of my favorite techniques, in part because it’s very hard to mess up.  You just sew along the lines that are already printed on the pattern.

I’m using Carol Doak’s book, 50 Fabulous Paper-Pieced Stars, which I found on our Guild’s treasure table many moons ago.  I think Carol Doak is a genius in the design department.  I got super excited about this project when she pointed out that you could mix and match the different sections and create your own new stars.

It may be heresy to say I'm not crazy about her fabric choices, but oh well, different strokes for different folks.  In case you agree color-wise, don't let that stop you: it's a great book! 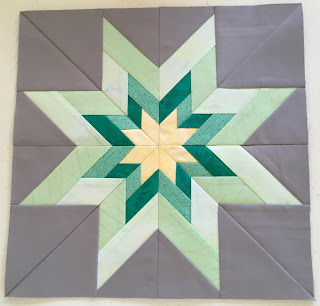 I'm making some stars as she designed them, and making extra sections of each one to mix with other star sections later.

I also love using up my stash!  I’m on a “no shopping” spree, and I already have enough fabrics for this project (no surprise to anyone who knows me.)

Anyway, this is June’s block, which came together pretty quickly. 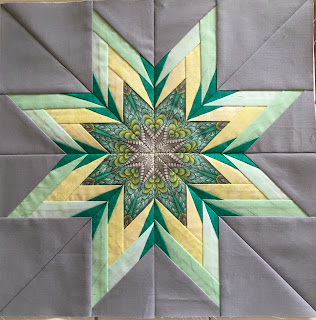 Due to various back problems, and my penchant for fussy cutting the center pieces, I barely managed to finish July’s block at 8:44 p.m. on July 31st.

Thanks to physical therapy and a great book called Treat Your Own Back by Robin McKenzie, I’m almost done with the August block: one more seam to sew and press, and I’ll post a pic!

Posted by captainhook at 3:02 PM No comments:

I had sew much fun making this for our local quilt guild’s annual challenge, and out of several categories, I won”My Favorite!”

Foundation paper piecing from a pattern called “Dancing Ribbons” by Cindy Rounds Richards forms the center, main section.  You can read more about the challenge rules and see the other amazing entries here. 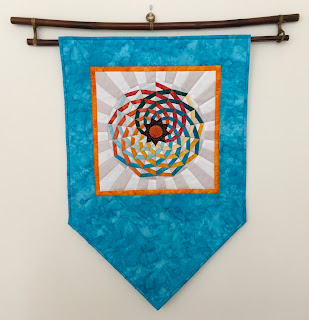 Posted by captainhook at 2:55 PM No comments: 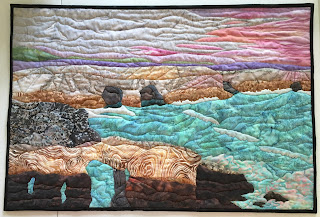 I finished my quilted version of the landscape photo I took (see previous post for more details).
Actually, I'm still sewing the hanging sleeve on the back, but it is more or less done.
If I ever do another landscape, I hope to be a little freer with my interpretation.  I did go wild with my color choices, though!
This is the original photo: 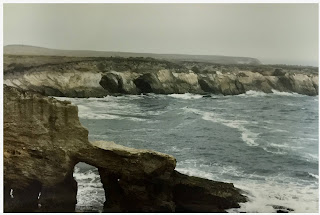 Posted by captainhook at 4:46 PM No comments: 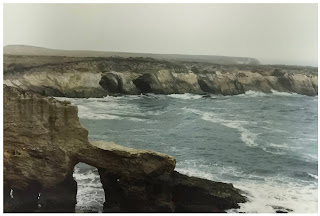 One of my cousins is a talented mosaic artist, and we decided to pick a photo we could each use as a basis for a project in our chosen medium.  I hunted through the many photos I’ve taken and we finally settled on this one, from a trip I made years ago to Montaña de Oro State Park.

My cousin’s friend did a watercolor of it before either of us could get our projects off the ground!  I love her interpretation. 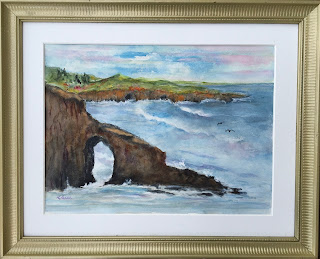 Meanwhile, I fussed and finagled and frittered away my time, choosing fabrics and drawing the scene on freezer paper, to use as templates. 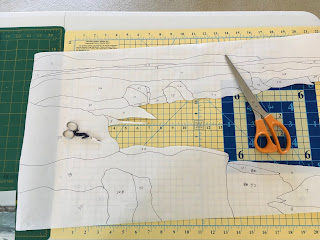 I knew I was being overly picky about trying to copy the photo, but I couldn’t help myself.  It's my nature.

Well, dang it, it’s my first attempt at this kind of project, so, yay me for giving it a go! 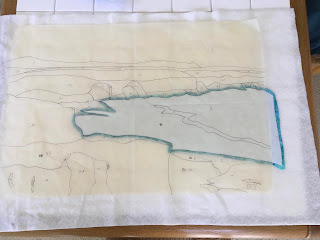 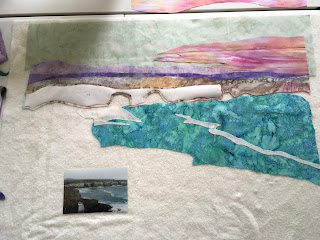 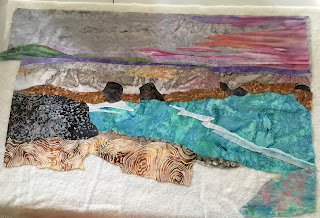 The ocean is startlingly bright, and it all looks a bit garish to me in these photos, but I'll be quilting a layer of tulle over it, which gives it a sea-mist feeling and softens some of the colors.

Soon I’ll be able to show the finished project!

Posted by captainhook at 3:47 PM No comments: 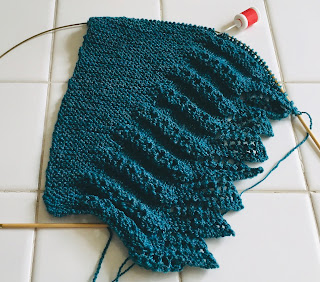 I have a simple project going, which I talked about in my last blog post.

This one, however, is my design, and it did take a bit of finagling and futzing to figure out exactly how I wanted to do it.  It’s going to be a shawl someday.  (Not soon.  Do not hold your breath.)

I’m using yarn I spun myself, and I love this color!  So happy to have started knitting with it.

Posted by captainhook at 3:34 PM No comments:

Frogging for a Brighter Future 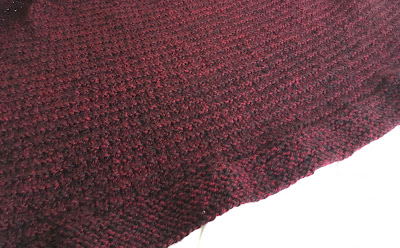 Some months ago, I started a project with a worsted Encore yarn, a discontinued color that I snagged back when I worked in a yarn shop a decade or more ago.  My plan was to design and write a fairly simple pattern.  I started the same thing with some chunky yarn, and I was going to have a great pattern that would be doable with worsted or chunky.  So versatile, so appealing to a wider audience, right?

I knitted for many hours on one or the other version, and I kept not liking the results much, but I kept telling myself that it would be fine once it was blocked, and besides, that was The Plan.

And it came to pass that I became Very Bored.  I didn't even want to work on these things, they were so bland and boring and not Happy-Making.

Finally I frogged both projects (rip it rip it rip it), which took quite some time, as I had already knitted a lot.  But it was worth it not to be saddled with something I wasn't enjoying.  It was satisfying, in fact, to rip out something that was so Not Satisfying.

I pulled out an oldie goldie, easy-peasy Ann Norling pattern, #38, "Crib-Blanket-Afghan III."  There are two options, Pebble (which is the one I'm doing here) and Garter 'n Brick.  Highly recommend these easy patterns!  Just as I had planned to do with my design, this has options for various weights of yarn and various sizes, all in one neat little pattern.

Three cheers for mindless knitting and TV watching!  Plus, with my dark marled yarn, nothing fancier would show up very well anyway, unless I wanted to go all lacy, which I did not.

I'm only about a fourth done with this, but I do a little most days, and it pleases me.  Success!

Posted by captainhook at 2:15 PM No comments: 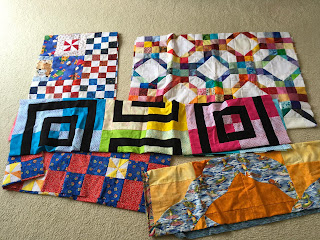 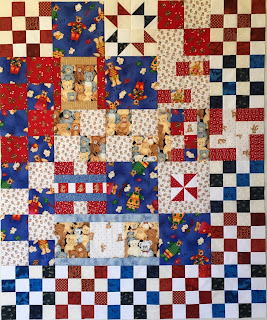 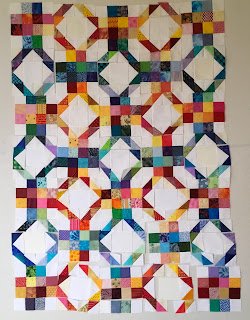 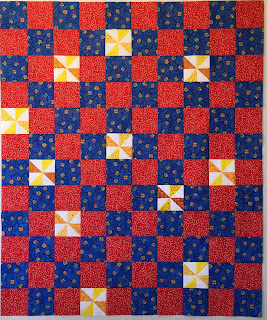 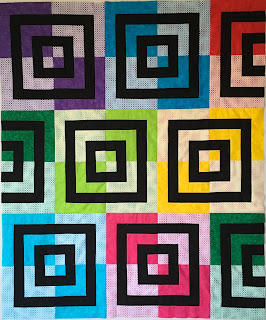 I get way more quilt tops done than I can actually quilt, so these tops are off to our guild’s community projects.  There’s one that I didn’t  take a full photo of because it’s so ugly. Maybe they can find something to do with it.  Cut it up and use it for something else, maybe;  that’s what I would do.

Posted by captainhook at 2:03 PM No comments: