The typical yarn emergency involves a dropped stitch, right?  Or maybe a misread (or miswritten) pattern, or the dreaded, "I'm down to my last ball of yarn in this dye lot and I don't think I have enough to finish this sweater!"

We administer CPR in the form of a crochet hook, picking up the stitch, or a re-read of the pattern, or a search on the web for one more ball of the yarn.

Luckily, the yarn emergency rarely requires a trip to the hospital.  Although running out of the right dye lot could give a person a heart attack.

But the other day, my friend Sonja bought a skein of handspun from me.


It's over 300 yards of worsted weight, spun from a generous helping of Granny Smith Crunch fiber, dyed by Jan of Daily Fibers.

Sonja forked over a generous portion of another kind of green and went off happily with her purchase.

I went on about my business, having a little snack, perhaps, then doing a bit of unpacking, followed by some knitting, and some cleaning of shelves, and then some crocheting, and I think it was the middle of the night when I realized, I spun the yarn right before I moved.  I set it aside and thought, I will do the whole soaking-of-the-yarn thing after I move.  I just had too much to do to bother with it right away.

And here I had sold it, and I had not soaked it.  And I really didn't know why I was supposed to soak it in the first place, because I'm still a spinning newbie in so many ways, and I just do what my pal Christina tells me to do.  She says, soak it and whack it on a bannister or something, so that's what I do.  Ours is not to reason why, ours is but to do or dye.

Actually, I'm sure she explained why, probably several times, but it just didn't stick in my overwhelmed brain.

So as soon as it was a civilized hour the next morning, I called Sonja and told her we had a yarn emergency.  Apologetic and a little embarrassed, I explained to the best of my ability.  She was very understanding, and luckily, she had not begun knitting with the yarn yet.

We agreed we would meet in L.A. with a towel and soak the yarn.  (Rendezvous point: a Binky Patrol meeting.)

In the meantime, I emailed my Spinning Master, which is kind of like a Tai Chi Master, only you are sitting down a lot.  Christina explained, patiently, for probably the fifth time, that soaking the yarn helps to set the twist.  The slapping of the wet yarn on a railing or something also helps.  Apparently that step isn't absolutely necessary, but it is fun, and it's a great way to take out that aggression you've been sublimating due to having to make five thousand phone calls and listen to five thousand automated menus and fill out five thousand forms in triplicate in order to inform the world you have a new address.

Anyway, turns out, if it were not soaked, the yarn would skew.  You would be knitting a shape and the shape would skew off in an unplanned direction, because the twist in the fibers wouldn't stay where you put it.

Light dawns in the beginner's brain.  (I hear a heavenly chorus of angels singing.)

I ended up just borrowing the skein back and soaking it myself this morning.  It's the least I could do. 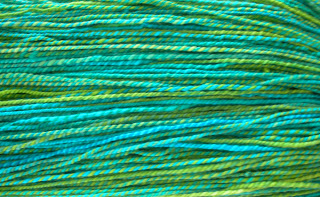 Here it is in all its glory, draped over my drying rack, letting the cool ocean breezes from the open windows wash over it, setting that twist to perfection. 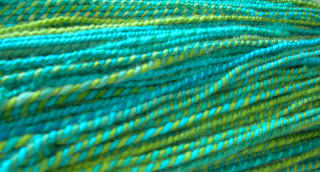 The upshot of all this is, I think we need YarnAlert buttons which we can wear at all times in case of a Yarn Emergency.  These would be crocheted out of waterproof fibers.  (Their twist would be set for all time.)  There will be a 24/7 office staffed with master knitters, crocheters, spinners, and other fiber fanatics, able to respond immediately to solve your problem and keep you from having, say, an asthma attack or worse, such as, for example, not enough yarn to finish that sweater.

Posted by captainhook at 3:25 PM