The first blanket I ever made was a simple crocheted afghan made of three shades of green yarn. Right after high school, I spent a summer traveling across the country with a friend (and with the blanket.)  You can find out what happened to that blanket in the course of our adventures if you read this excerpt from my someday-perhaps-to-be-published memoir.

I've recreated the blanket pattern, and I offer it for free at the end of the story.  (Sign up to follow my blog and be among the first to know whenever I post a new free pattern!) 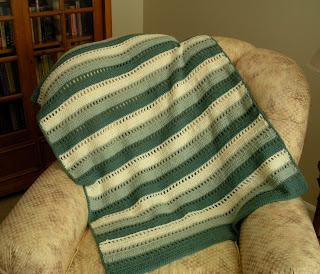 THE CAT WITH NO PURR

... Along the way, my friend Rose and I met Dee and Charlie, a married couple who temporarily adopted us by letting us park our van in front of their small adobe house.  It was nice to have access to indoor plumbing for a change.

They lived in a dusty, hilly neighborhood that had seen better days but had not abandoned all hope.  My impressions of the place--grey adobe, grey and dusty winding dirt roads--are forever greyed by the grey-blue light of the dusty dusk as we drove up their hill for the first time.

We were all hanging out in the living room one morning when we heard a growl.  A flash of grey and white feral fur leaped in through an open window and darted into the kitchen.

When Rose and I yelped in dismay, Dee said, "Oh, that's just the neighbor's cat."

Charlie said, "He sneaks in to eat our cat's food.  We leave the window open for him because we feel sorry for him."

We trooped toward the kitchen to see.

Charlie and Dee told us that the neighbors hardly fed the cat anything except, once in awhile, some rice and beans.  Maybe that was all they had.  Maybe that was the best they could do.  But we were pretty sure cats weren't meant to be vegetarians.  Rose and I were vegetarians and we liked rice and beans, but we weren't cats.  We couldn't help feeling sorry for this one.

Maybe the neighbors expected this cat to catch mice and rats, birds and lizards; maybe that was his job. But according to Dee and Charlie, he was hungry all the time.

He wasn't much more than a kitten, really.  Maybe he just couldn't catch that many mice.  He was just a juvenile delinquent with a bad temper who growled all the time and would bite anyone who came too close.  He never let anyone pet him and he never purred.

Our friends told us that the neighbors' little boy would chase the cat around the dirt yard, catch him, and swing him around and around by his tail.  Sometimes the neighbors would hit or kick the cat.

But this cat didn't cower or mew or whine.  Instead, he growled and spat and fought.  He learned how to run, how to hide, and how to mooch food from Dee and Charlie.

Screw the lizards, he no doubt thought, there's free grub in a bowl next door.

He was one tough, smart, teenaged cat.

To add insult to injury, the neighbors had named the cat "Fluffy."  This clearly had nothing to do with his personality and probably put him in an even worse mood, though, to be fair, his tail was long and fluffy, possibly from being swung around and around by it.

Obviously, something had to be done.

Early the next morning, on our way out of town, Rose and I grabbed the cat when he snuck in to steal food, and he did not thank us.  He snarled and hissed and scratched and bit.  Bleeding, we plopped him into our van on top of my three-shades-of-green crocheted blanket.

The next thing we knew, his snarl-spit-hiss morphed into a startled stare.  Then this juvenile delinquent cat started kneading his paws back and forth, nuzzling the blanket as if it were his long-lost mother.

We gunned the motor to our van and drove off into the West like heroes. 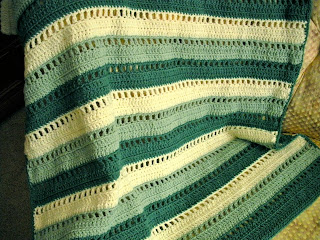 Despite its magical mothering properties, my blanket couldn't work a complete miracle overnight.  Our hands and arms were soon covered with scratch and bite marks from the many times we tried, ever-so-gently, to pet our stolen prize.

He was a dark and stormy cat.  We named him "Monsoon."

When we fed him--real cat food, naturally--he still hunched over it and growled, and stared at us with unblinking eyes, and wolfed the food down, or lioned or tigered it down, as if ravenous on the plains of the Serengeti in a famine with no rain.  But we never gave up on him, and as the weeks passed, he grew calmer, until sometimes he would even let one of us pet him for a second.  His fur was softer than velvet.

Then he would whip his head around and clamp down on the offending petting hand with his needle-sharp teeth or his razor-sharp claws.

"Quick!  Where's the blanket?!" we'd say, and we'd toss him onto it again.  As soon as his paws hit that crocheted blanket, he'd start kneading and nuzzling.  It was like turning on a light switch, how quickly he changed.

One day, while safely nestled in his blanket, he let me pet him a little longer than a second, and when he lazily turned his head to bite me, he didn't bite very hard, just enough to warn me, to keep me on my toes.  He batted my hand with his paws, but he kept his claws tucked away.  Then he slowly lowered his eyelids over his bottomless black eyes, and he purred.

This pattern also appeared in the 2012 Crochet Calendar. 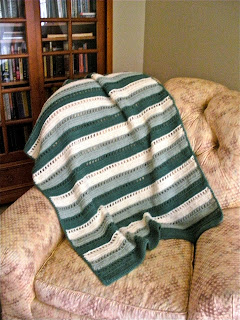 Pattern repeat is a multiple of 2 + 1 (plus 3 for your beginning chain, which becomes the first double crochet of the first row.)


Continue repeating rows 4, 5, and 6, changing colors as you go, until blanket is about 43” long (7 repeats total of entire color sequence).  End by repeating row 2 three times with color A.  Do not finish off.

Border:
Chain 1, sc evenly around blanket, doing 1 sc in each st on the top and bottom of the blanket, 2 sc in each dc on the sides, and 3 sc in each corner.  Finish off.  Weave in ends.  Donate!

If you like this free pattern, you might also like this elegant one, the River's Edge Ripple, or this playful one, Granny Paints the Town.
Posted by captainhook at 3:42 PM