A few weeks ago at the local yarn shop, a group of us knitters/crocheters/spinners/weavers were sitting around chatting about all the many projects we were working on, most of us with multiple projects in varying stages of completion in our project bags, in closets, on our couches, stuffed into a cooler in the garage, or an otherwise empty oatmeal box in the pantry, and someone joked, "At least you haven't gone over to the dark side and started quilting too."  (This might have been, in part, a reference to the quilt shop next door.)

I piped up, "I'm planning to take a beginning quilting class soon!"

Some eye-rolling ensued, probably because half of those knitters/crocheters/spinners/weavers are already quilters themselves.  They no doubt knew what I was getting into.  Another obsession, another stash, this time of fabric.

I have wanted to make a quilt for many years.  As a child, growing up in Tennessee, during those hot, humid summers, when to go outside during the day was an invitation to heat stroke and chiggers, I used to curl up on the floor beside the air conditioning vent, with a book to read--the thicker, the better--and a quilt I grabbed from the linen closet.  It wasn't really my quilt, I just adopted it.

It was a mass-produced, machine-made thing with no family history to it, probably one of hundreds like it, probably from Sears or Spiegel or some other big chain store.  It had a paisley top with pink backing and simple machine stitching in straight lines.  These days, I find I don't care much for paisley, possibly a result of severe, adolescent-onset Paisley Overdose in my hippie years, but never mind: at the time, I liked it just fine.

I would lie there in front of the air conditioning vent, reading, and when I got too cold, I would wrap myself in the quilt, and when I got too warm, I would unwrap.  I would spend hours there, day after day, reading Dickens and Michener and George Eliot.  "How I Spent My Summer Vacation?"  I was in other worlds, other eras.

That quilt is long gone; I don't know what happened to it.

Once, in my teens, I tried to piece together some bits of mismatched rags by hand, never having had a quilting lesson or read a quilting book, with no quilters in the family showing me the ropes.  Needless to say, I didn't get very far with it.  It was lopsided and ugly and boring.  I thought, "I hate to sew."  (In fact, I used to make my own clothes, until one day I decided I hated to sew.)

Then, in 2010, during my two years back in Tennessee, I met a quilter, Janet, and thought, "I need to learn a new skill and keep the synapses in my brain firing so I don't get dementia in my old age."  It was close to my birthday, and Mom bought me a cutting mat and one of those big rulers.  Janet gave me a spare rotary cutter she had. 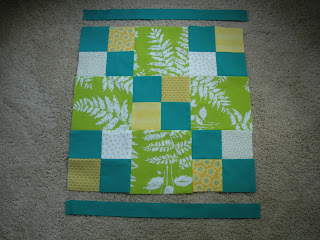 I actually did get the borders on, and with Janet's help, the batting and backing, and I started hand quilting, and after awhile, I thought, as I so often do at times like this, "I am going to be stitching this one blanket for the rest of my life."

It sat on my couch for months, one-third quilted, staring at me reproachfully, while I knitted and crocheted and learned to spin, until I finally flounced back to Project Linus, gave them what I had done so far, with all the left over fabric.  I flounced away again, thinking, "I don't like quilting.  I hate to sew."  That was my story, and I was sticking to it.

But now, in my new home, with a quilting store offering great classes right next to the LYS, with my brain still needing exercise, and wanting to meet new people, I got sucked into the vortex.

I had a vision of making something beachy, in aqua and turquoise and sandy colors.  Then I fell in love with an unexpected fabric, and the vision morphed.  This fabric still had teal involved, but so much more!

Note the many shadings of colors in the beautiful flowers!  Everyone in the class was making the same quilt, but since we all chose different fabrics, they all look different, and all are beautiful.

The phrase, "the dark side" took on new meaning, as I learned to press seams to the side under the darker fabric so they are less likely to show on the quilt top. 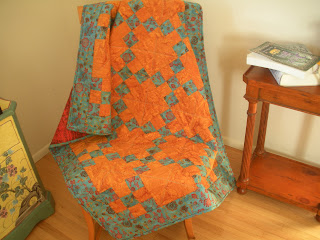 Finally I have the quilt I have wanted for so long.  It's the perfect lap quilt, just the right size for wrapping myself up and reading a good book.  (Gee, who wrote that book on the table?!) 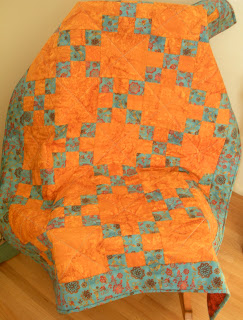 Despite the occasional slightly mismatched seam and the imperfections of my hand stitching on the binding, I am inordinately proud of my first quilt!  When you have such gorgeous fabric, it's kinda hard to screw it up.

Next up, my secondary goal in all this: to make a charity quilt!
Posted by captainhook at 1:37 PM