Yes, We Have No Tomatoes

The quilt shop was out of tomatoes.  You know, those pincushions shaped like tomatoes?  Apparently they'd had a run on tomatoes and were temporarily out.


I do have my mom's old tin pin box, which I love (thanks, Mom!), but the cushion on top has lost a lot of its springy, cushy, pin-grabbing properties. 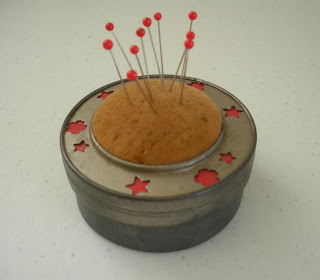 The top of the box doesn't screw on, so it doesn't always stay on either. 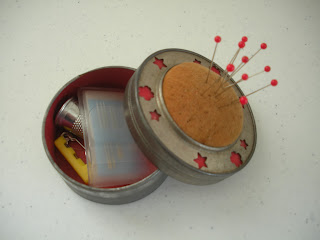 I don't want to store my extra pins in it, as I seem to recall they have a tendency to end up in a pile on the floor when the top pops off unexpectedly.  I keep my thimble and such in it instead.

So I was going to go for a tomato, as I mentioned, but no dice.  Or rather, no tomatoes.  No diced tomatoes, either.  Or salsa.  But I digress.

The shop (Quilt Ventura) did have some of those big, red, magnetic, metallic holders, which I like because they attract pins and make it easier to find dropped ones, but I don't like the jumble of potentially finger-piercing pins that is stored in a pile on top.  I have already pierced far too many of my fingers in my day.  Or rather, I have pierced one or two fingers, too many times.  (I'm just trying to be precise here.)

The shop also had some felted pincushions, larger and heavier than I wanted, and a knitted one in the shape of a cupcake, which was cute, but I thought, "Um, I know how to knit.  I am learning to felt.  Surely I can make a pincushion myself."

I researched pincushion patterns.  There are lots.  Then I got one of those magnets in the mail, with advertising on the front for something I neither wanted nor needed.  I had some leftover batting and nine-patches from My Very First (Finished) Wonderful Quilt.  Surely I could find a way to use the magnet to make my own version of a pincushion that would have all the properties of the Perfect Pincushion of my dreams! 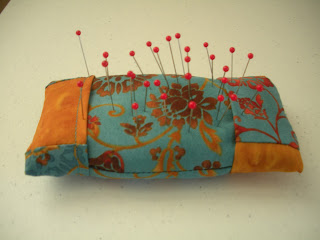 It took a little experimentation, but this is the result.  It looks like a tissue holder for your purse, doesn't it?  The magnet isn't very strong, so after a quick trial, I saw I couldn't put it inside the fabric of the future pincushion.  So I made little pockets for it instead. 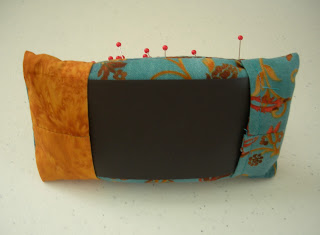 If I drop a pin, the magnet underneath can find it for me.  On top is a nice, cushy place in which to poke pins.  Plus, the fabric is so gosh-darned pretty.

The day after I finished this, I got another of those magnets in the mail.  I know I could buy stronger magnets, but I do love repurposing things.  Reduce, reuse, recycle!  (Yarn in, yarn out, after all.)

Could there be more pincushions in my future?  Fabric in, fabric out!