Everyone around here is making the Color Affection shawl.  They are so darn pretty!  I got sucked into the vortex--and then spit back out.

First, I wanted to use up stash.  But then the stash yarns I had, even though they looked pretty together, wouldn't have shown the pattern as well.  I like the Color Affections that use a light, a medium, and a dark, and a bit of contrast of color as well.

When you're an artist, sometimes the palette changes.

Finally satisfied, I began to knit, conveniently half-forgetting or ignoring all the stuff I read on Ravelry about how the edge gets really tight, and you have to knit it super-loose, or you have to block it like a banshee when it's done.  Some people have introduced a yarnover to help loosen things up, and there are great directions on how to do it, and some people do it one way, and some do it another, and some don't do it at all, but everyone seems to be chiming in on the tightness of the edge.

I read all about it, I just didn't think I needed to do it, because I'm a loose knitter.  I felt a little smug about it, to be honest.  Pride goeth before a fall.

I cast on blithely and began to knit.  And then, as I knitted, and started the second color, I didn't think the colors were that great together after all.  Not enough contrast. 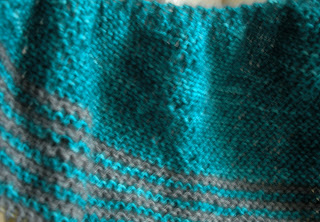 Off to Anacapa again.  Much conferring with various knitaholics who happened to walk by.  Many said the colors were fine as is--even the owner, which is awfully ethical of her, considering she was essentially talking me down from buying more yarn.

But I bought more yarn anyway.

Took it home.  Started knitting with it.  Hated it.  Too much contrast.  Went back to the grey.

Sure, they were all fingering/sock yarns, but that doesn't mean they are all truly the same weight.  Or density.  Or fluffiness.

And then one evening I held up the partially finished shawl, about to let it flop back into the project bag after an evening of knitting denial, and I noticed how super-tight the edge was.  How this made the shawl as wavy and rolling as the Tennessee hills.

More precisely, I finally allowed this information to sift into my conscious mind, whereas before it had been loitering in the subconscious, leaning against a lamppost, smoking something it shouldn't have, and smirking at me.

I thought, "This will never block out."  And I disliked the relative thinness of certain otherwise perfectly acceptable yarn, as mentioned before.

So I frogged the whole thing.

Someday I will buy MORE yarn to go with the teal.  It will be soft and squishy, and it will be the right color.  Someday.

In the meantime, I just got a job blocking someone else's Color Affection!  She too was discouraged at the tight edge and the wavy rolling hills it created.  But I blocked it and it came out beautifully!  No more hills and valleys.

I'm encouraged, and itching to start my Color Affection all over again.  Must go shopping.

Luckily, I just got a part-time job at--wait for it!--a quilting AND knitting shop, Roxanne's a Wish and a Dream!  They have yarn AND fabric!  Clearly a little piece of heaven on earth.  I start next week!  People keep telling me not to spend my whole paycheck in the store.  I keep telling myself I will put myself on a yarn diet.

Posted by captainhook at 5:32 PM