At long last, I made it to the Santa Barbara Fiber Arts Guild show at the Faulkner Gallery in the downtown public library.  Right after I dropped off my submissions, I got sick, so I missed the opening reception that evening, and the guild meeting a couple of days later, then missed coffee with a friend and a wander-by-the-show that we had planned last week.

Many things were rescheduled as the days passed, but I am slowly recovering enough to do exciting things like wash my hair and do a load of laundry. 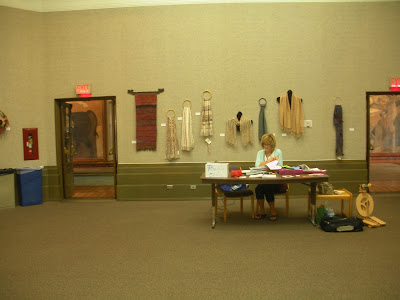 Today, it was my turn to sit in the gallery and chat with people who wander in, which is really fun. Here's one of my favorite quilters, Linda, who had the shift before mine.

I brought my cute little travel wheel, which you can see perched to the right of the table.  My friend Diane joined me, bravely lugging her big wheel.  People were fascinated by the spinning--great conversation starter.

Serendipitously, I got there just as a man and his young son were commenting on my handspun.  The son has been learning to knit at a knitting club at his school.  They mentioned the club had mostly girls, and I mentioned there is a tradition of men knitting as well as women.  I like to encourage people.  They were already aware, so that was great.

I pulled out some of my roving and let the boy experiment with drafting and seeing how long the fibers are.  He was already quite knowledgeable about carding and such, and when I mentioned how they shear the sheep, he said, "Alpaca too!"  Gotta love this kid! 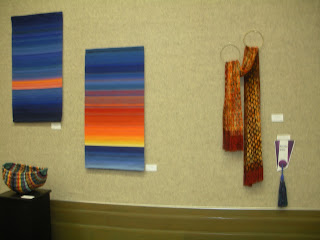 We had a lovely chat with a visitor from China; wish I had thought to take her picture. 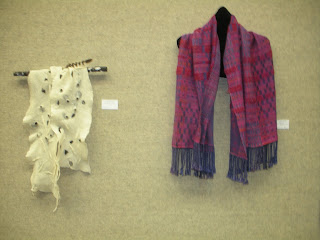 Next time I go, I will try to take more close-ups.  My camera battery chose to run out of juice right when I got there today. 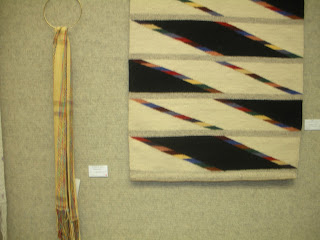 I am so inspired by all the beautiful work my fellow guild members have created.  With so much variety, and so many ideas that are "out of the box," they take what some people consider to be "mere hobbies" from the level of crafts--not that there's anything wrong with crafts--to the level of art. 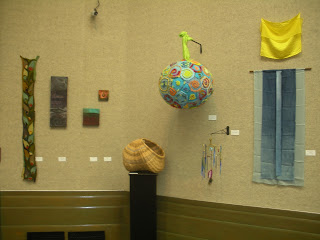 Posted by captainhook at 5:03 PM