A recent commission for a hat had me searching for a simple pattern that would work with my gauge using Noro Obi yarn.  It's a blend of wool, silk, and a small amount of mohair, fairly pleasant to work with as there isn't enough mohair to shed all over the place.  It is a thick-thin yarn, i.e. in some places it is thicker than others. 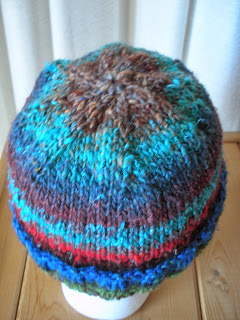 Noro usually gives a range of recommended needle sizes for all their yarns, which is probably more sensible than just saying one size as most yarns do, since everyone knits with a slightly different tension.  Some of us are looser than others.  Not sure what that says about personalities: there doesn't seem to be a correlation between uptight or anxious and a tight knitting gauge, but I don't think this has been scientifically studied!

Still, it's annoying when the range of needle sizes is given as #8 to #10.  Is it worsted weight or is it bulky?  You decide!

I went for a #9, did the dreaded gauge swatch, and came up with a stitch gauge of 3.5 per inch.  I liked the way the resulting fabric looked.  Onward to knitting the hat.

I was hoping to find a free pattern that had already done the math for me, but when that failed, I came up with my own.  You could adapt this for a smaller head, but if you decide to cast on fewer stitches, do it in multiples of 4 since you are starting with a 2 x 2 rib.  You could use a smaller needle instead, or in addition.  Then you might not want to knit 8.5 inches from the cast-on edge.  You might go 7.5 or 8.  But you still have to get that hat to cover the crown of the head!  Sometimes you just have to do the math!

This pattern is for a large size hat, hence the name:

Transfer sts evenly to dpns now, or a little later, as you decrease to fewer total sts. 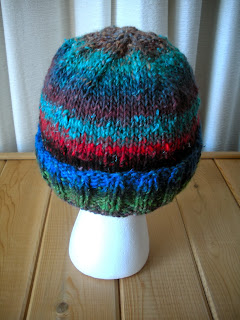 Cut yarn, leaving around 6 to 8 inches of a tail.  Using a tapestry needle, weave tail through remaining sts on dpns, then remove dpns.  Pull yarn to tighten, poke needle through top of hat, turn hat inside out and weave in ends.  Turn hat right side out again, fold up the cuff and you're done!

Feel free to contact me with questions or comments!

Posted by captainhook at 9:45 AM