My latest pattern, LoLo's Newsboy Cap, was first conceived a few months ago, when I asked Lauren at the LQS (local quilt shop) if she would model some of my scarves and such, for photos for my patterns.  I was hoping maybe she would see those scarves and take one in trade, but I was also willing to pay cold, hard cash if that was her preference.

Turns out, what she really wanted was for me to make a hat like one she bought in England ages ago, as seen below.  It is her favorite hat, but it's getting on in years.

A third part of me was thinking, I could write up the pattern and have another to offer in my Etsy shop.

A fourth part of me was echoing the second part, adding, Hours and hours of knitting along with hours and hours of reverse engineering?  Say it ain't so!  There may even have been a mild curse or two in there, but only in my thoughts.

But Lauren looked so excited, because although she is a wonderful quilter, she doesn't knit.  And there I stood, with all the appearance of someone who knows what the hell I'm doing, all knitterly and the like, epitomizing the perfect opportunity (or so she thought!  Ha!) to make the hat of her dreams.

And here she was, willing to take a couple of hours out of her full-time busy schedule to pose for me, so I agreed to the deal, all the while hoping that once she saw all my beautiful scarves and cowls and such, she would be unable to resist the thing that would be easiest for me.

So we got together on a surprisingly warm day in winter, the opposite of perfect weather for wearing scarves, and we took a ton of photos, and they are appearing little by little in my patterns, and I think she is so photogenic, it's just great!  I am grateful.

Alas, she still wanted her hat.  No amount of cables knitted out of handspun yarn or intricate lacework could tempt her.

So, when the going gets tough, the tough go shopping for yarn.  We went to the LYS and had a lot of fun playing with colors and fibers, and she finally picked Tundra, a luscious blend of baby alpaca, merino wool, and silk.  Then we grabbed some Scoubidou, a thin, metallic yarn, as a carry-along to give it some sparkle. 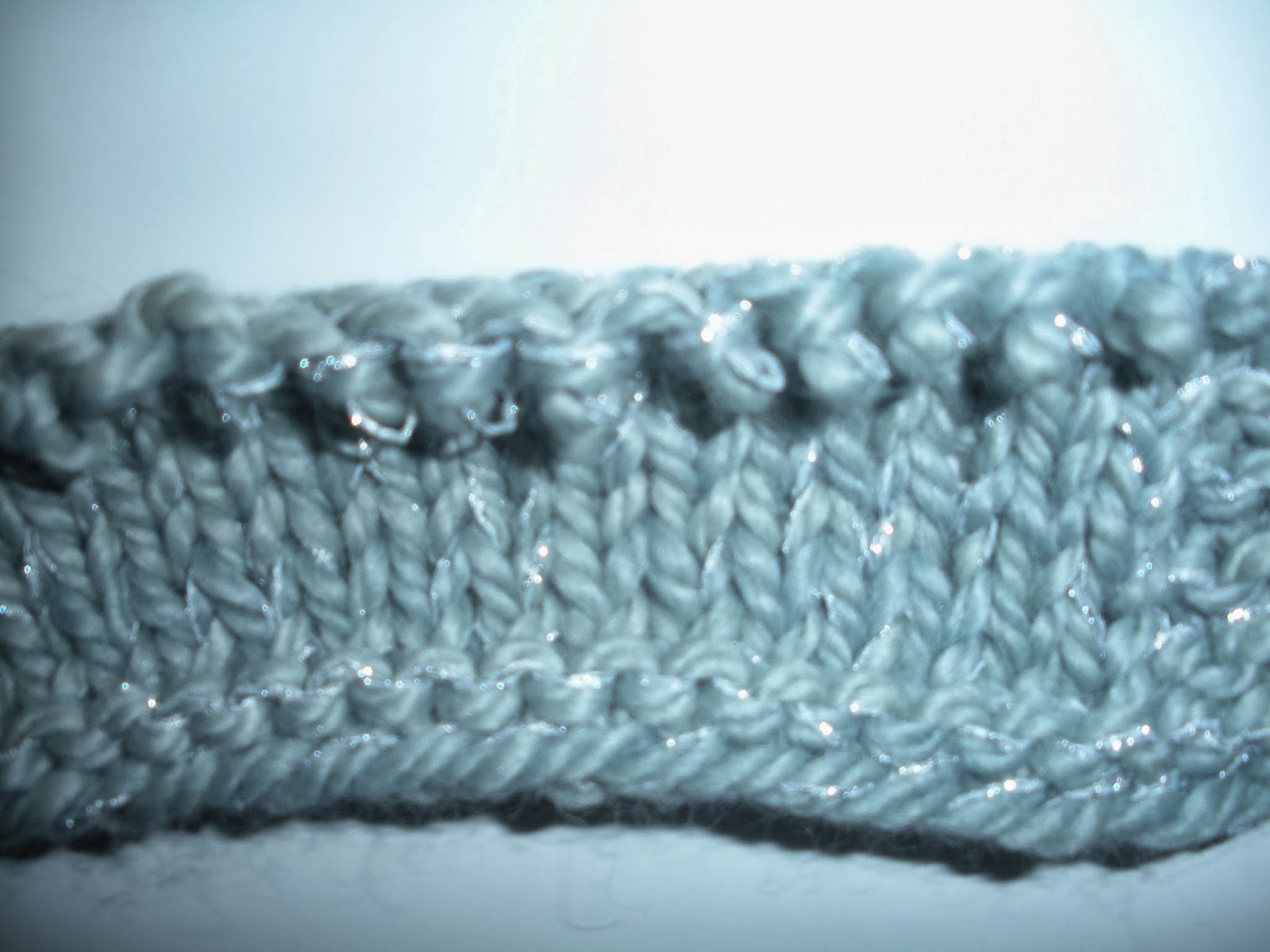 I took the original hat and started measuring dimensions and counting stitches and figuring stitches per inch.  I made a swatch or two with different sized needles to see what looked good.

I started knitting the actual hat, writing down what I did with every row, and feeling quite sure I had counted the right number of stitches and had a handle on when to knit and when to purl, and it was going swimmingly.

Or so I thought.

Cue the Gauge Gremlins, who, unlike helpful Shoemakers' Elves, come out at night when you are sleeping and you are halfway through your project, and cause your gauge to change!

They clearly caused my hands to change my own knitting gauge--amazing! Gauge Gremlins are such powerful creatures!--so that in spite of all my assiduous counting and measuring, the hat was coming out HUGE.

It's true, I'm a sloppy swatcher.  Did I knit an entire 4-to-6 inch square and bind off and block and measure it, the way you're s'posed to?  No.  I got the gist a few rows in, and I liked the way the fabric looked with the needles I was using, and off I went.

Sloppiness goeth before a fall. 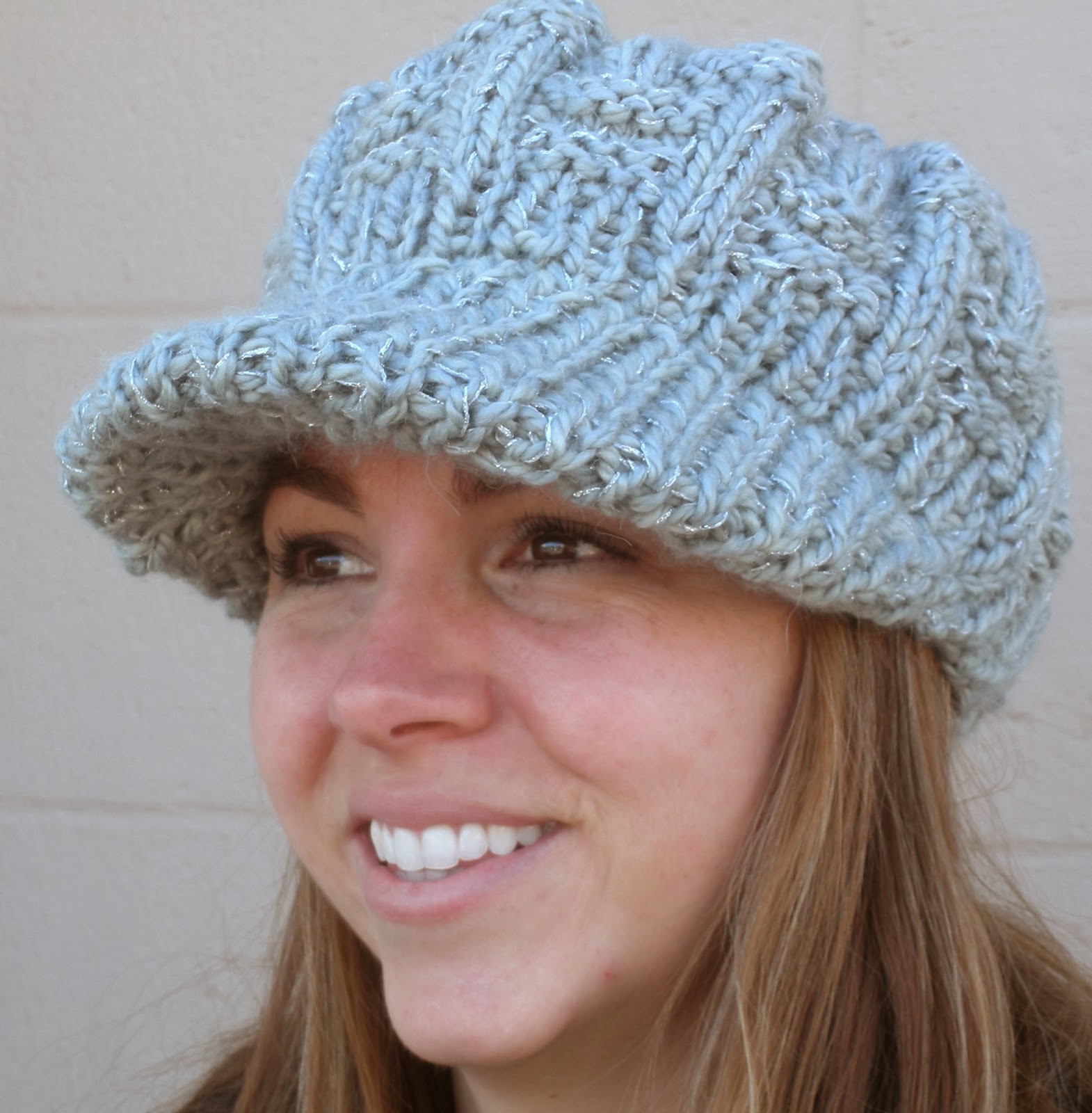 By the time I got past my severe knitting denial and was able to admit that the hat was HUGE, I was almost finished with it.  I didn't want to rip out 25 rows, so I kept knitting.  At least I took it to Lauren to try on before I wove in the ends, because a part of me knew this was HUGE and frogging might have to occur.  I was willing by that time to rip the whole thing out and start over with smaller needles.  And maybe fewer stitches.

When Lauren tried it on, it was clearly too big.

Luckily, we agreed starting over again at the beginning was a Very Bad Idea.

Instead, I fixed it in the mix, as we used to say in the music biz.  When I attached the brim, I skipped stitches on the hat and tightened it up enough so that it doesn't fall off her head.

Then I went home and made another, with fewer stitches and a slightly thinner albeit chunky yarn, Colinette Prism, and one size smaller needle.

Behold, a much more sensible size! 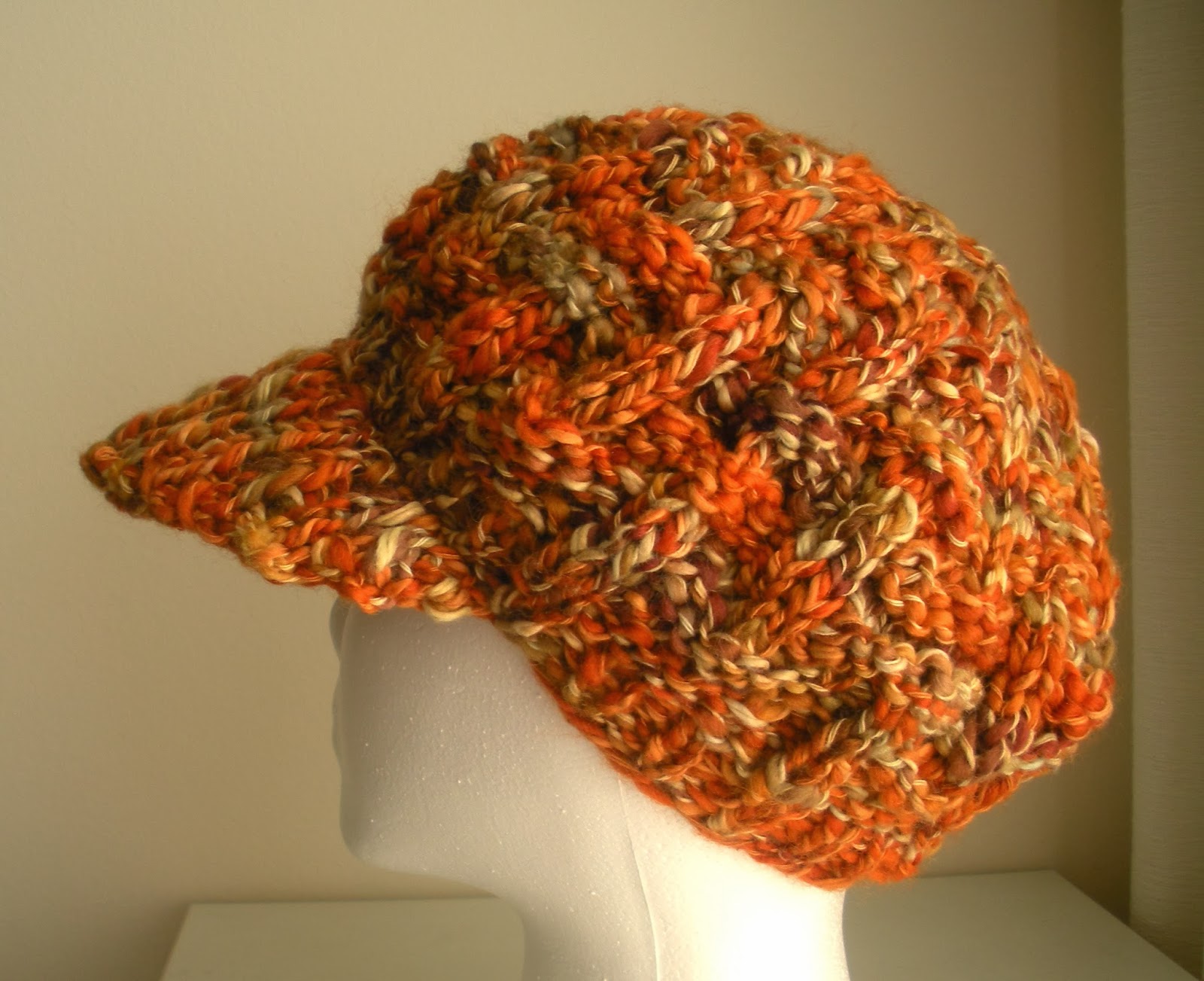 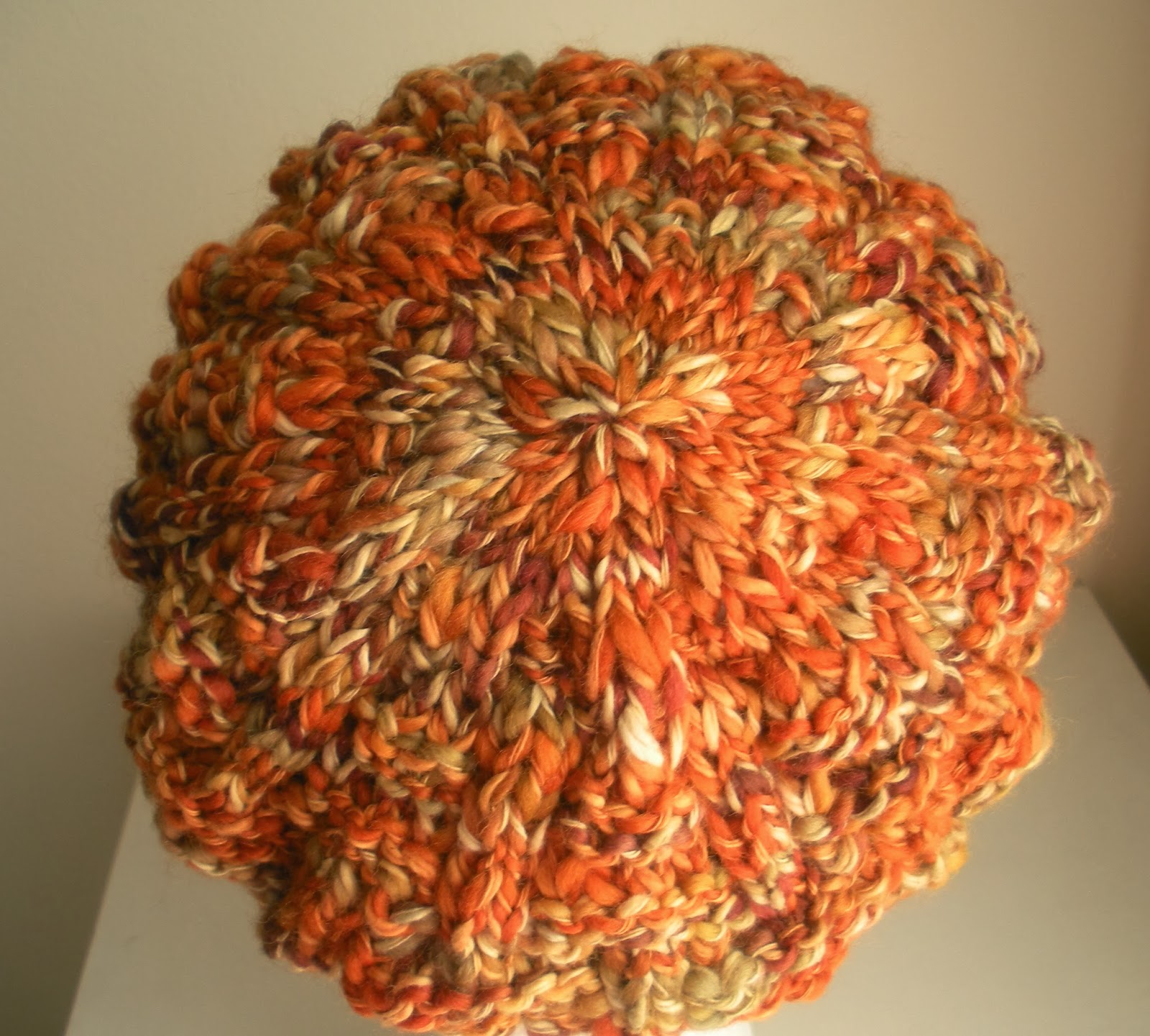 It also looks cute without the brim, so if you don't want to fuss with the Lauren-approved brim, you can just make the hat. 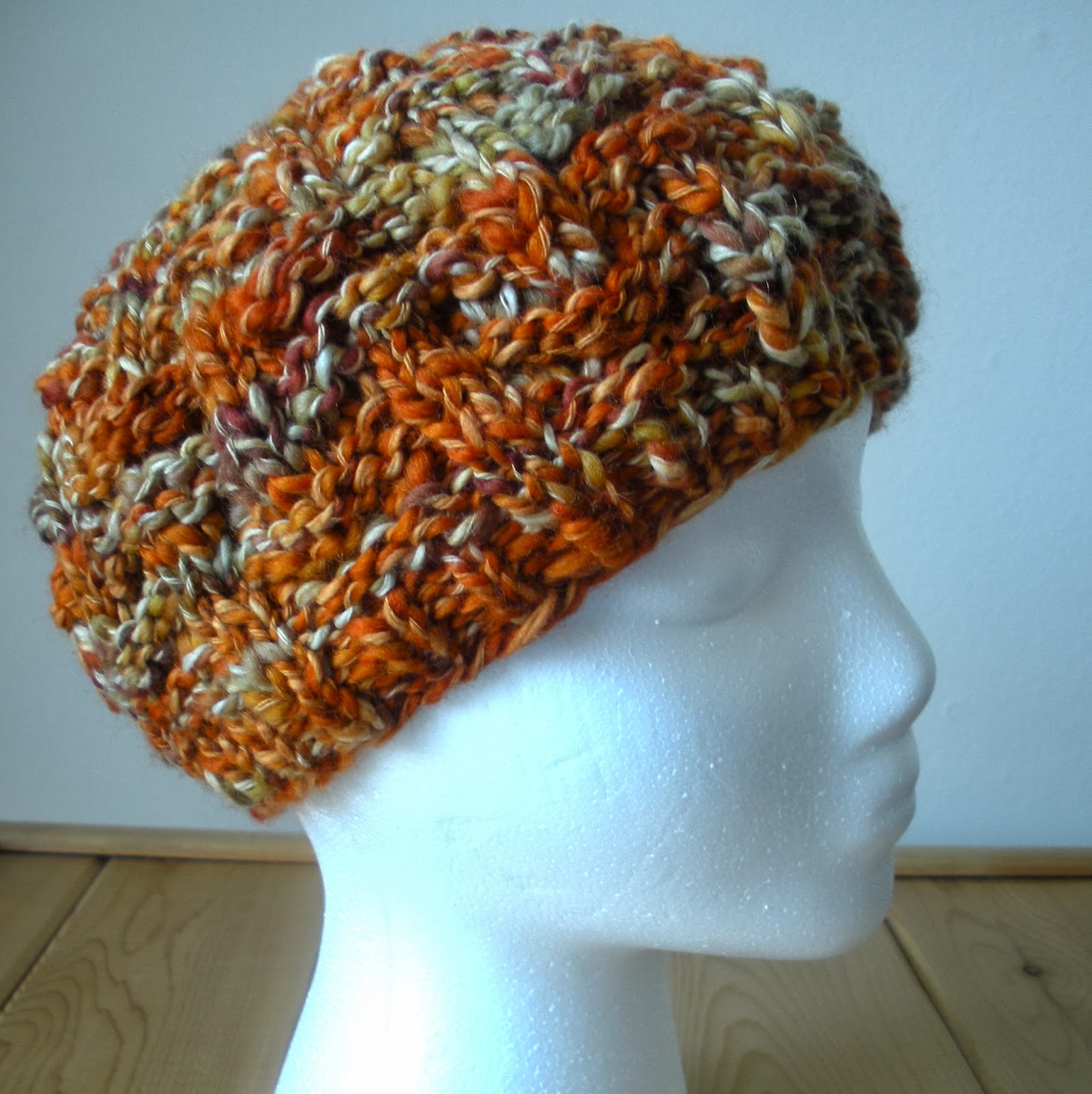 Please note, the baby alpaca in the Tundra yarn makes it awfully heavy, and you might want to avoid it if you're making a hat with a brim.

That brim has a bit of plastic in it to keep it from sagging, and two layers of knitted fabric surrounding the plastic, so, be forewarned.

The Prism is wool and cotton, much lighter, but any chunky weight yarn will work.

This may look complicated to some, but for most of the pattern, on every other row, you simply knit the knits and purl the purls.  Easy!

Posted by captainhook at 6:46 PM