The Golden Cliffs of California

Someday, hope to quilt this: 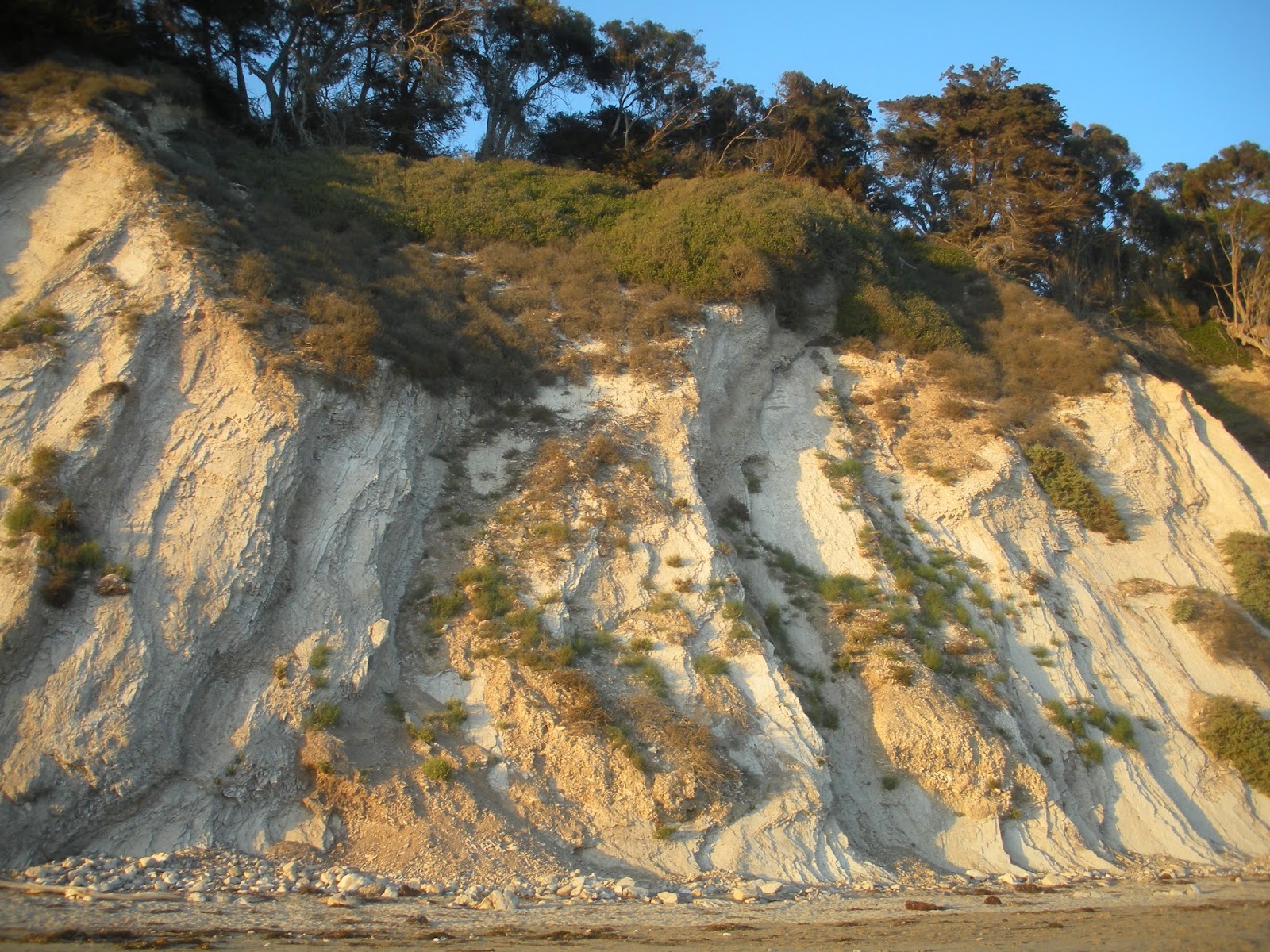 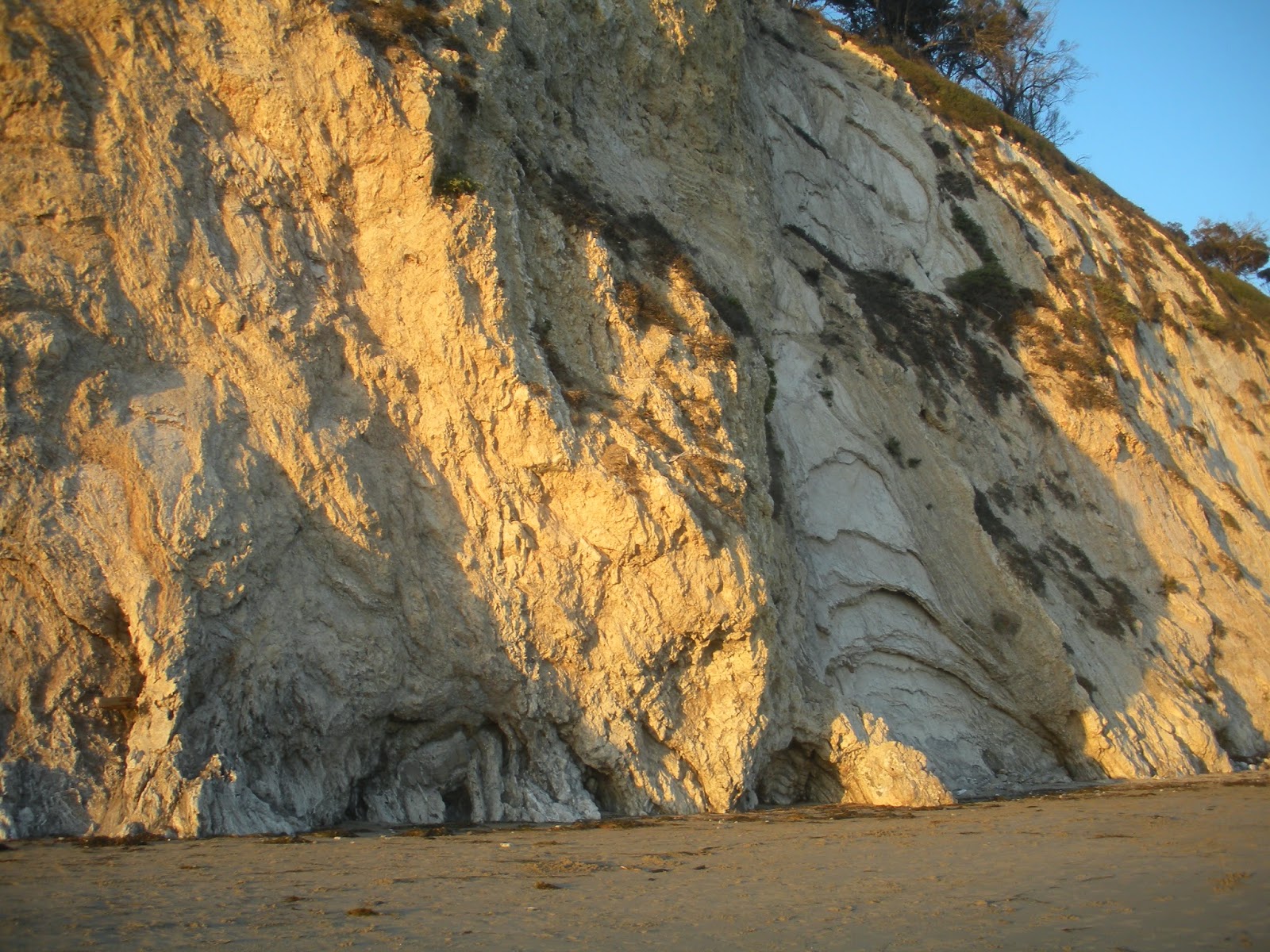 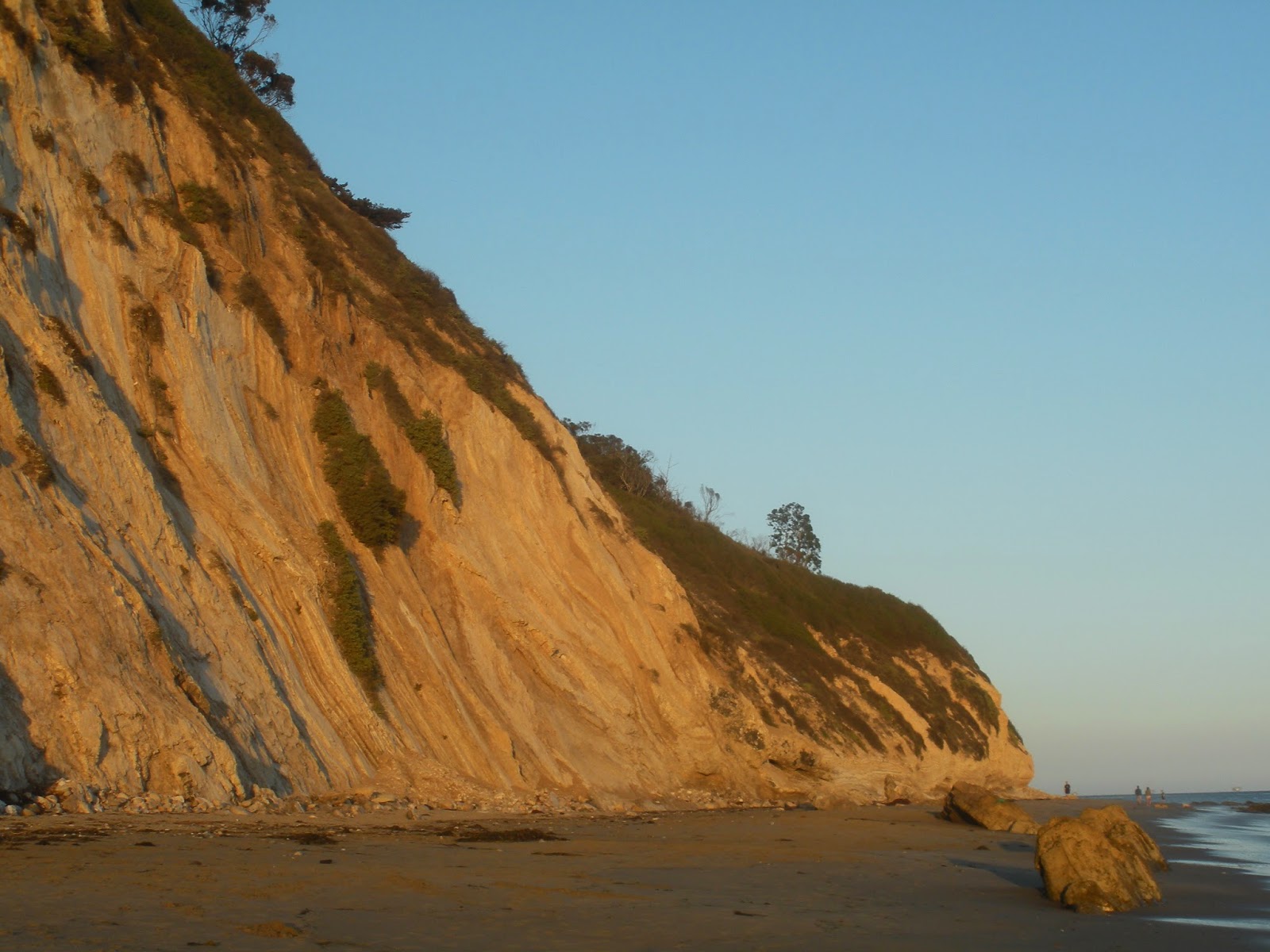 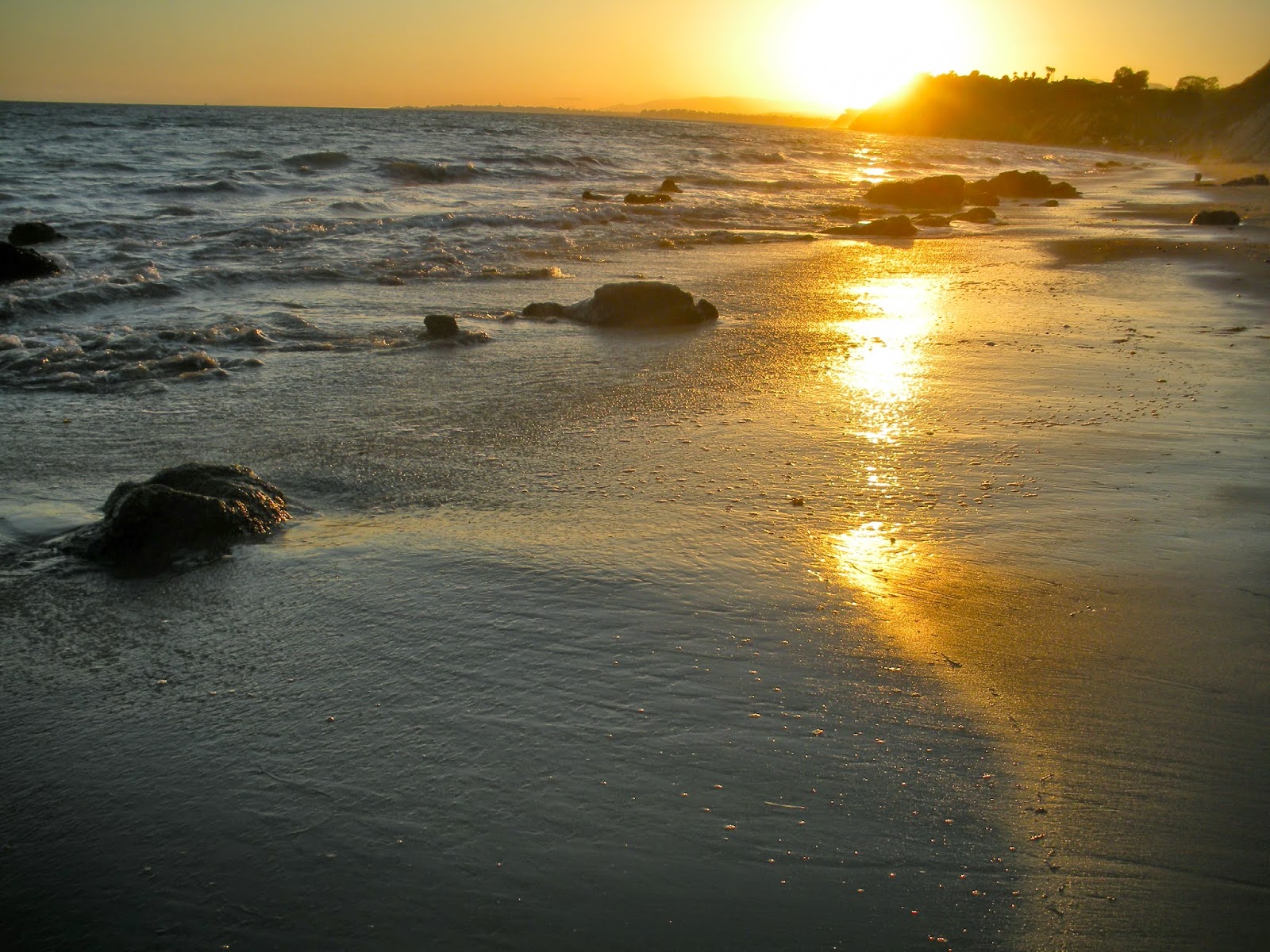 Always an inspiring day at the beach. 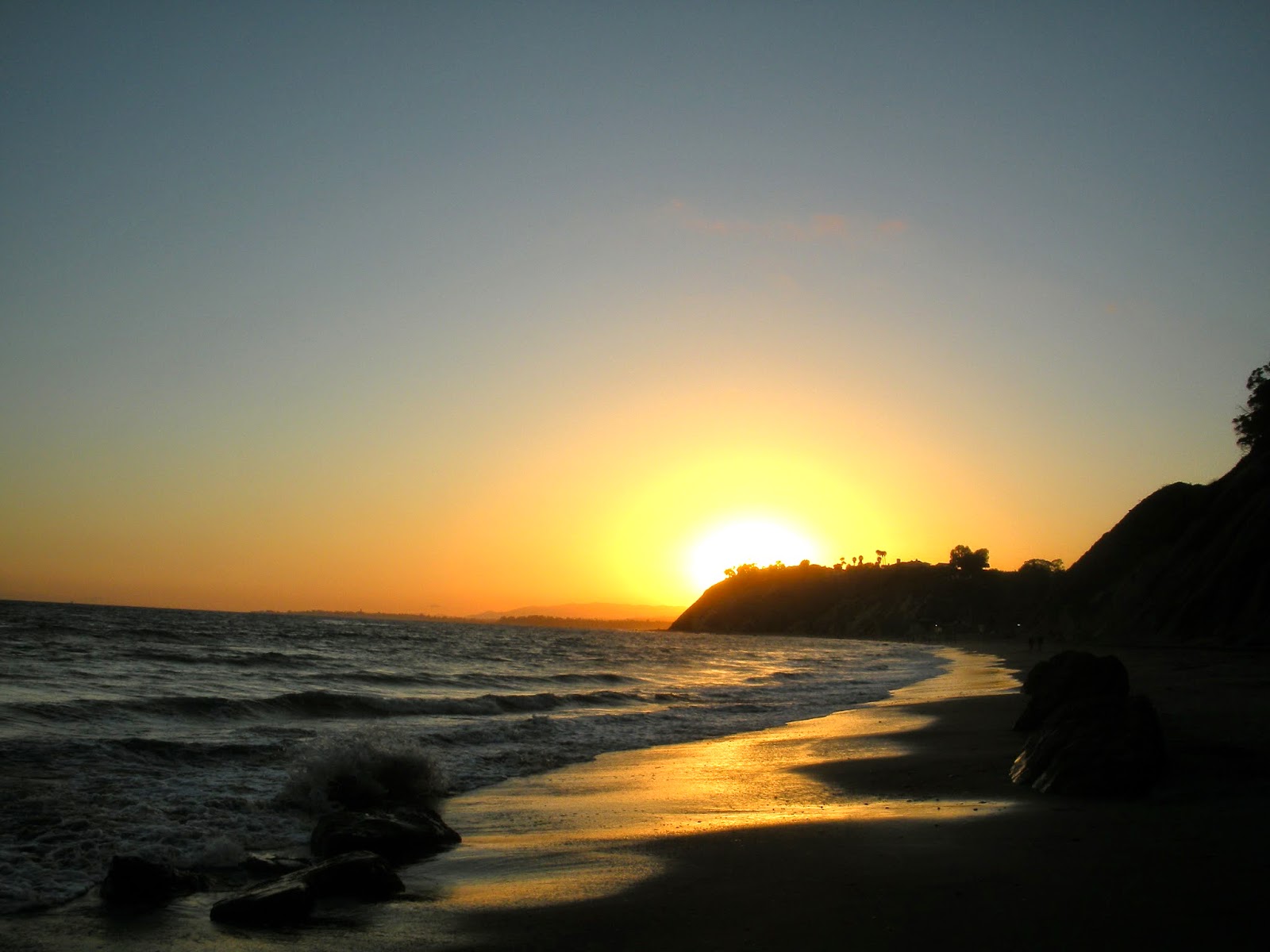 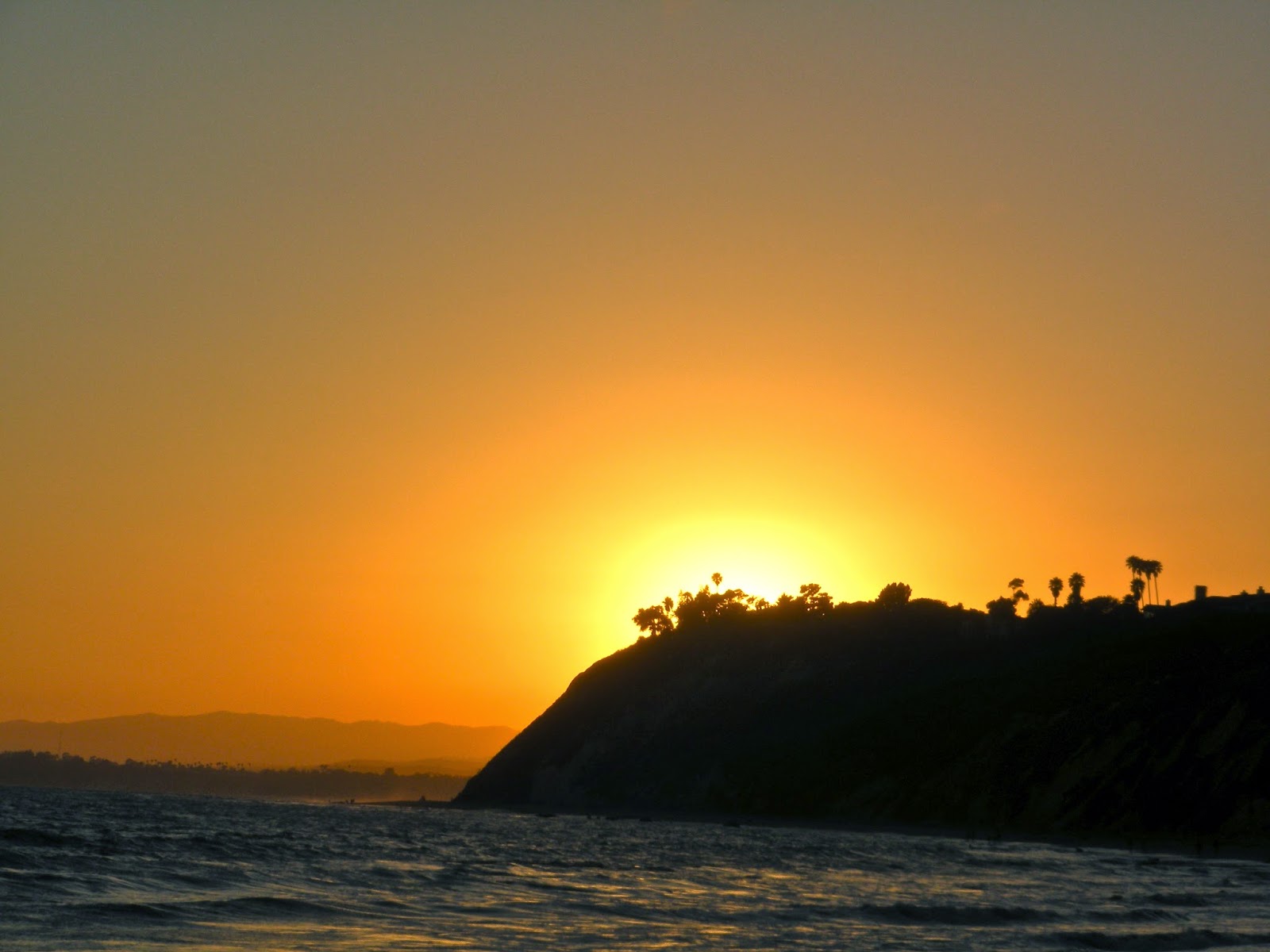 The sun setting behind the cliffs created these amazing halos.

The only downside of the beaches around here is the tar.  Turns out, it is naturally occurring, or so I am told, and it has nothing to do, so they say, with the nine thousand or so oil rigs squatting like fat ugly bugs off the coast.

I now travel with a 'tar removal kit' consisting of Dawn detergent and a dish scrubbing pad for the really bad days, baby oil and cotton balls for the lighter days.


Kinda takes some of the joy out of a beach walk--but not enough to keep me from getting my feet wet, thinking about all the beauty in the world, and planning to knit, quilt, or crochet a version of everything in sight!
Posted by captainhook at 12:35 PM 2 comments:

I committed recently to finishing one quilting UFO a month (see the 52 Quilts website for more details), and while I was finishing my June jelly roll project, I pulled out some fat quarters that I won during last year's Central Coast Quilt Shop Tour.

I am determined to use up my stash!  So I cut up the fabric in June, creating another UFO.  As if I didn't have ten UFOs already!  But this one looked so easy!  I couldn't wait to start sewing. 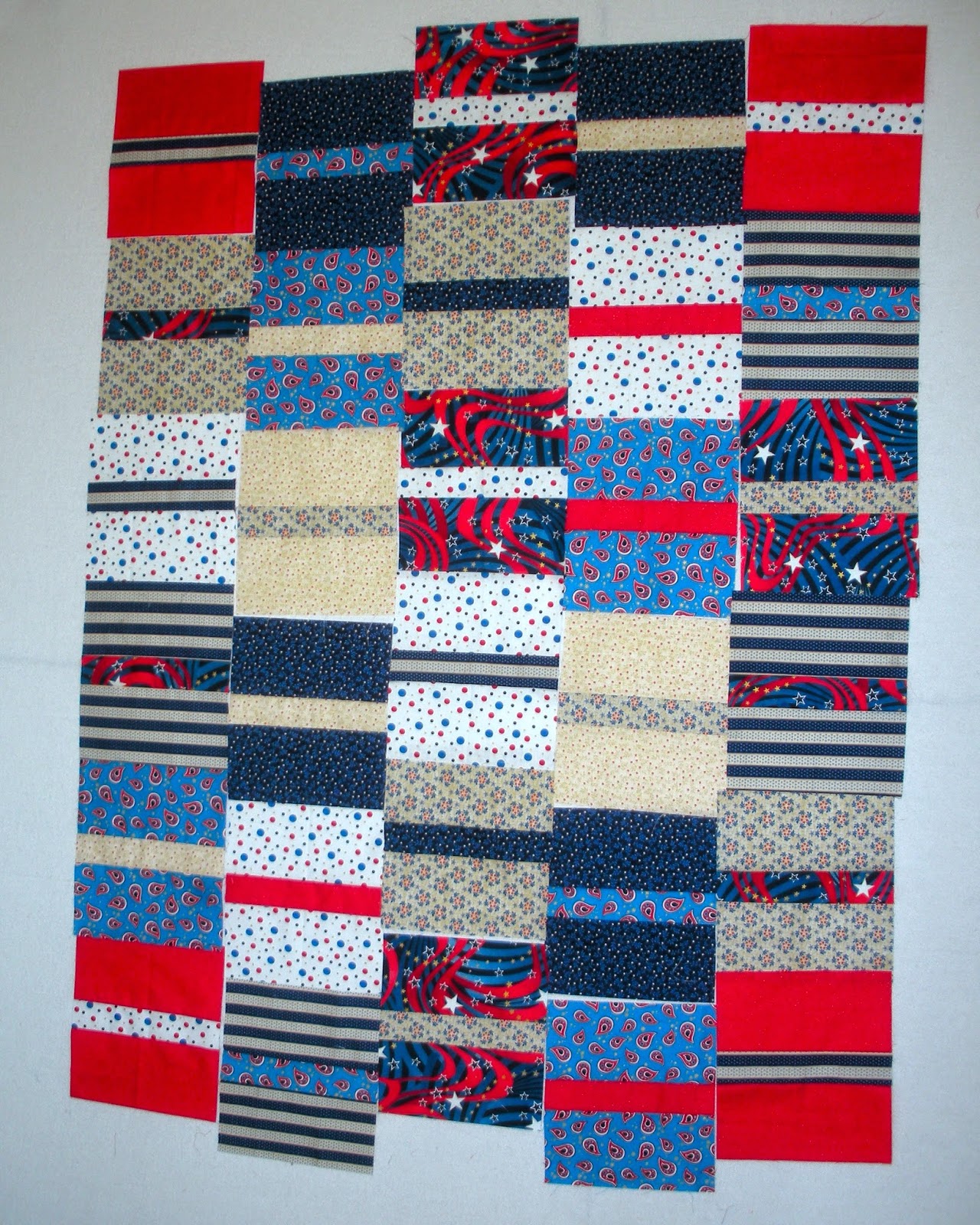 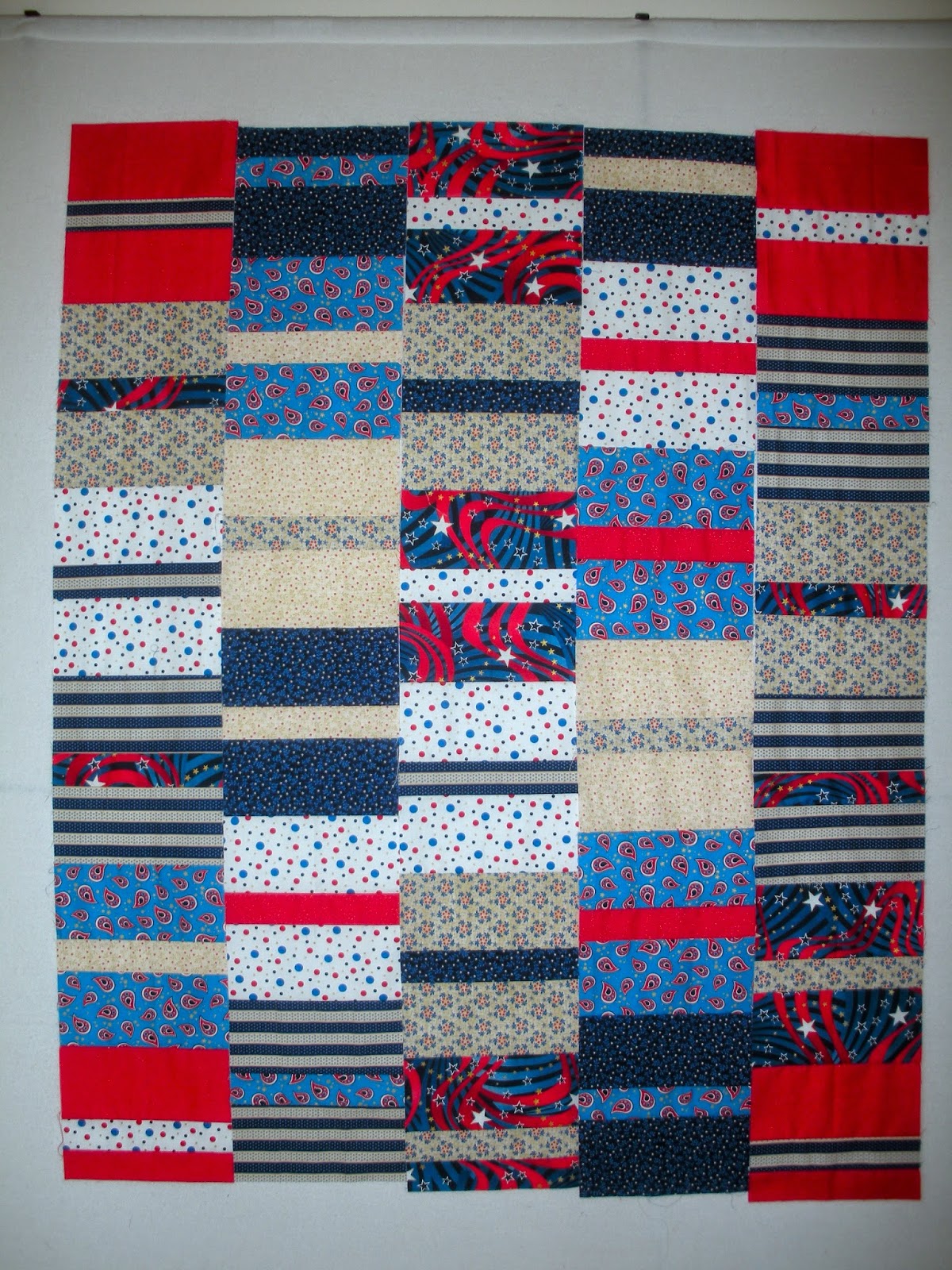 I followed a pattern by Gail Abeloe from Back Porch Fabrics in Pacific Grove.  It's from a booklet called Top 10 Saturday Demo Patterns.

I added a couple of borders to make mine larger, since I had half the amount of fabric the original pattern called for. 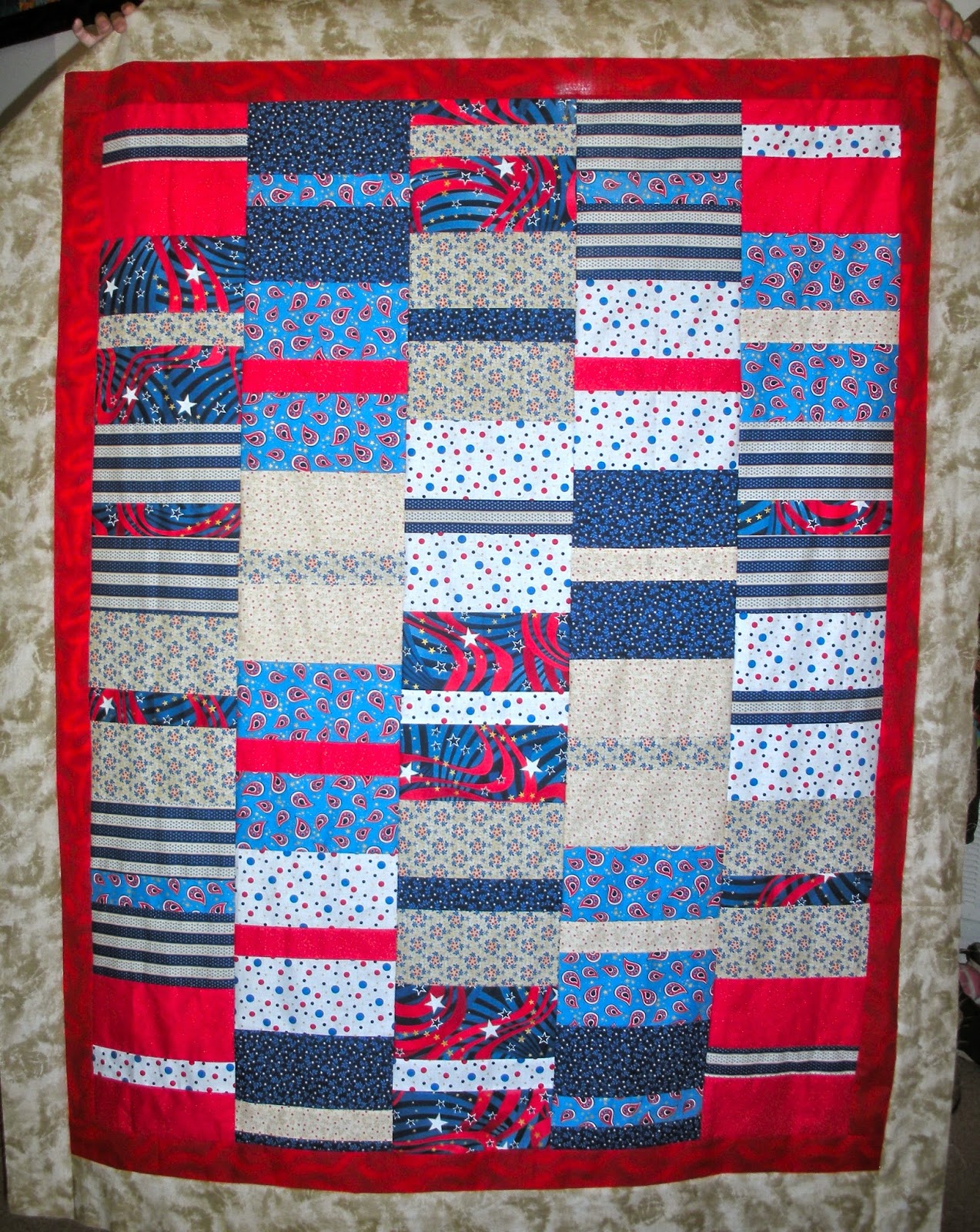 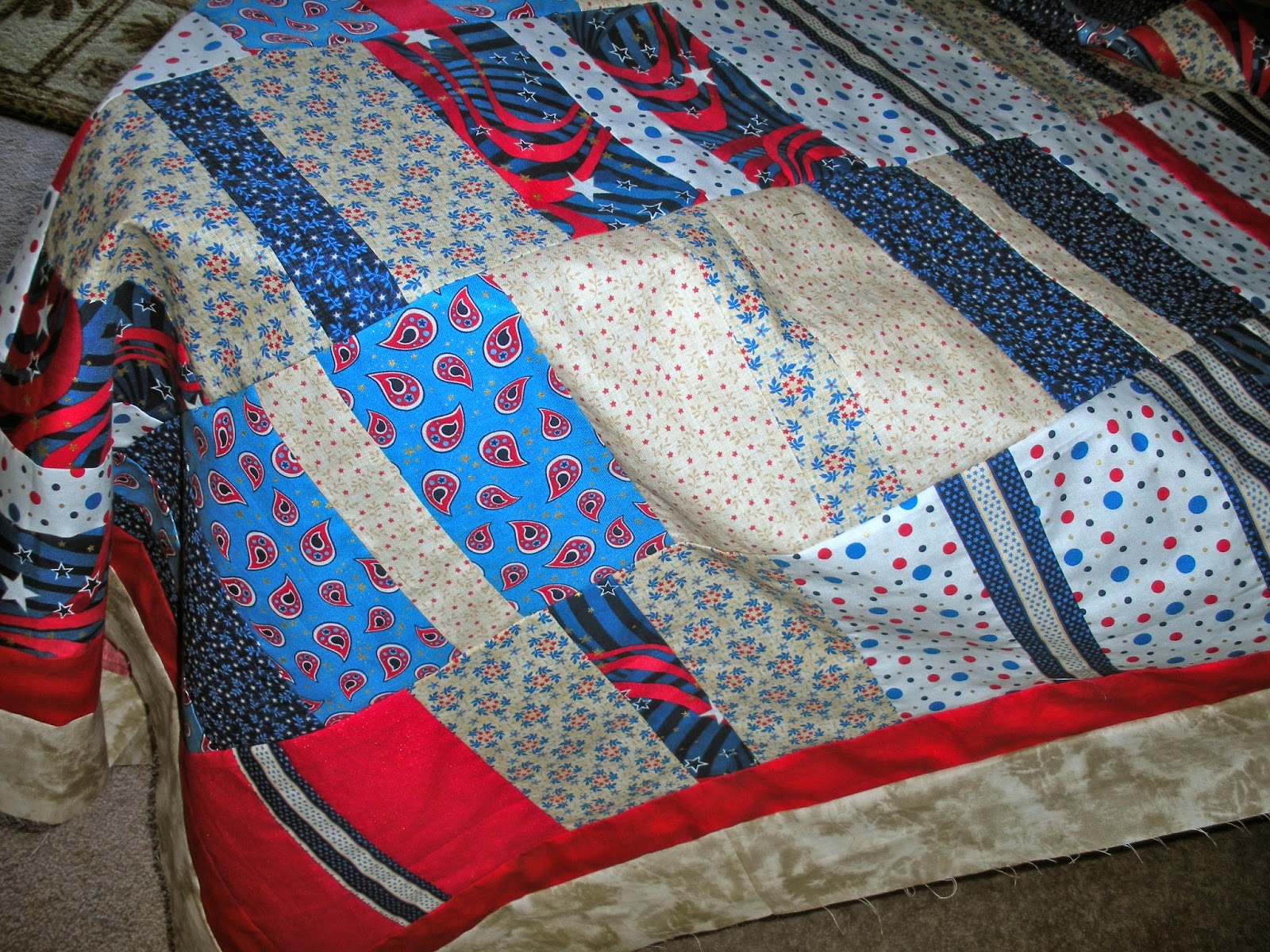 I decided just the top counts as an FO, and even though it is still rather small, it would be a challenge to quilt it on my home machine, so I gave it to kindhearted Debbie to quilt for the Quilting Angels charity.

She has a longarm machine!  And she knows how slow a quilter I really am.

Fabric in, fabric out!  FIFO!
Posted by captainhook at 11:08 AM No comments:


Some months ago in a land not far from here, I was given this very cool Moebius cowl pattern to make as a shop sample.  The free pattern is the Shoreline Moebius.  My copy was fresh from Skacel Knitting, the yarn was gorgeous Simplinatural by HiKoo, the pattern stitches were simple but nicely textural, and I was looking forward to it.

Now, this was not my first Moebius.  I have made several, but it was awhile ago, so I wanted to refresh my memory on how you cast on for this, because the Moebius cast-on is its own remarkable technique.

I went to the link provided by Skacel Knitting, where they say they have "detailed instructions" on the Moebius cast-on, and I watched the famous Cat Bordhi YouTube video where she demonstrates this cast-on in a perfectly clear and sane manner.

She tells you to count only the top cast-on, even though clearly you are getting stitches on the bottom cable as well, i.e., double the stitches.  The pattern I received said to cast on 400 stitches, so, following her directions to the letter, I counted to 400 and ended up with 800 stitches.

It seemed like a lot to me.  An awful lot.  Then again, the pattern called for a 60" circular needle.  So who am I to question the great Skacel?

I went on Ravelry, I googled a bit; I couldn't find more than one sample of the cowl, and nobody was complaining about the cast-on, or giving any extra info or errata, so I boldly began to knit, AS PER THE DIRECTIONS, I re-emphasize here. 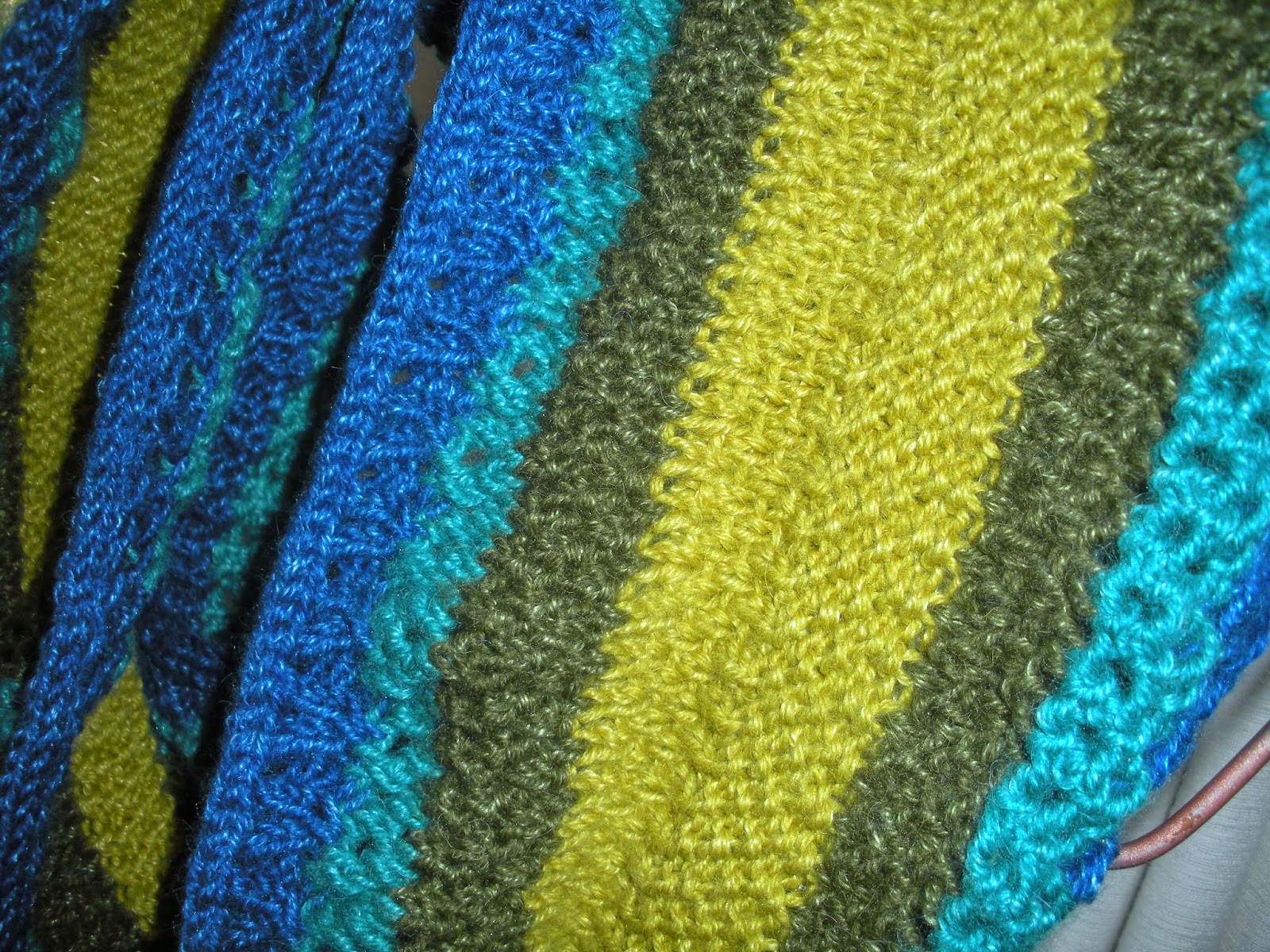 The pattern says you can actually get two cowls out of the number of skeins and colors required.  It seemed like I was using an awful lot more yarn than that per color.  How odd.

But then again, when you look at the directions for the Moebius cast-on for the umpteenth time, and you look at the ones you followed with your original Moebius that you made years ago that turned out fine, and it says "cast on 80--and you will end up with 160," well, if you're me, you just keep on knitting.  Call me crazy.

I kept having a bad feeling about this, but when everything is bunched up on a circular needle in a Moebius, all twisting on itself, it's kinda hard to tell how big it's going to be.  One could do some math, but one would be confused and one would still not be able to figure it out.  ("One" was me, in case that wasn't clear.)

I finally started to cast off.  I was running out of yarn.  But then again, the pattern calls for an I-cord cast-off, which uses a lot more yarn than a regular cast-off, so who am I to say that this is a big mess and I got it wrong, and am I really going to rip everything out and start over?  Hardly.  Roxanne threw another skein of yarn at me for the casting off, and the cowl was slowly inching off the needles into its amazing enormous cowl-ness, like a great twisting shawl for a giant, or a slide at a water park, or a multi-colored jumprope for hobbits.

When it was finally off the needles, petite Michelle at the shop tried it on: it hung to her knees.  I should have snapped a picture but I was too upset.

I felt somewhat on the defensive.  I really thought I had followed the directions correctly, and to have it clearly be WAY too big was embarrassing.

Then someone else from the shop wanted to make one, and was asking how many to cast on.  Yes, she too wanted clarification of the cast on.  I was not alone, and now someone would benefit from my misery.

So I explained a bit about Moebii, and said, when it says to cast on 400, only count to 200, and she said, huh?  It turned out that by the time she got her copy of the pattern, the great Skacel had CORRECTED the TYPO, and the pattern now said to cast on 200.  Which meant you would end up with 400 cast on.

Much grumbling about people who don't edit their patterns and test them within an inch of their lives ensued from the peanut gallery.  (Me.  I am the peanut gallery.  In case you weren't sure.)  Are you hearing my frustration and annoyance?  Is it coming through the computer?  But of course, we all make mistakes, we are only human. 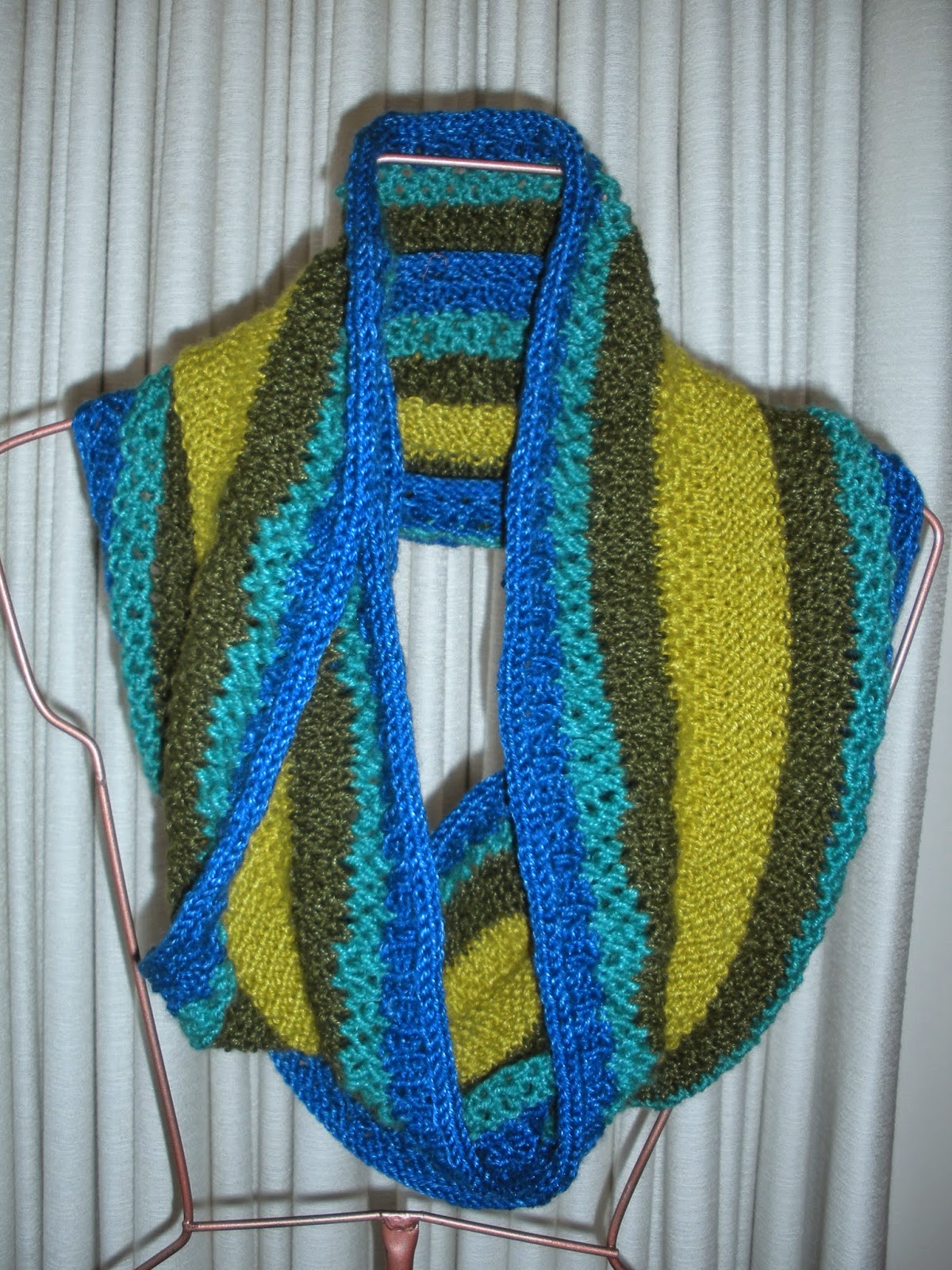 Now, I am no stranger to the knitted or crocheted Franken Object.  I have made a Frankenhat (which actually turned out fine), and a Frankenbear, which some child probably loved, and I usually can find a way to laugh at myself, but it has taken me quite a few months to get to where I can laugh about this cowl!

Finally I am able to reflect with equanimity.  The yarn was, and is, yummy, and now that it's CORRECT (emphasis mine), the pattern is fun!  So I can recommend grabbing those 60" circulars and giving it a whirl!

Posted by captainhook at 4:19 PM No comments: This utterly adorable newborn baby or doll sweater is another shop sample I made using one of my favorite new yarns, Simplinatural by HiKoo.  The pattern is from One Skein, 30 Quick Projects to Knit and Crochet by Leigh Radford.  Very fun to knit.

I didn't have an utterly adorable baby to pose wearing it, so was reduced to putting it on a stuffed…monkey, I think it is? 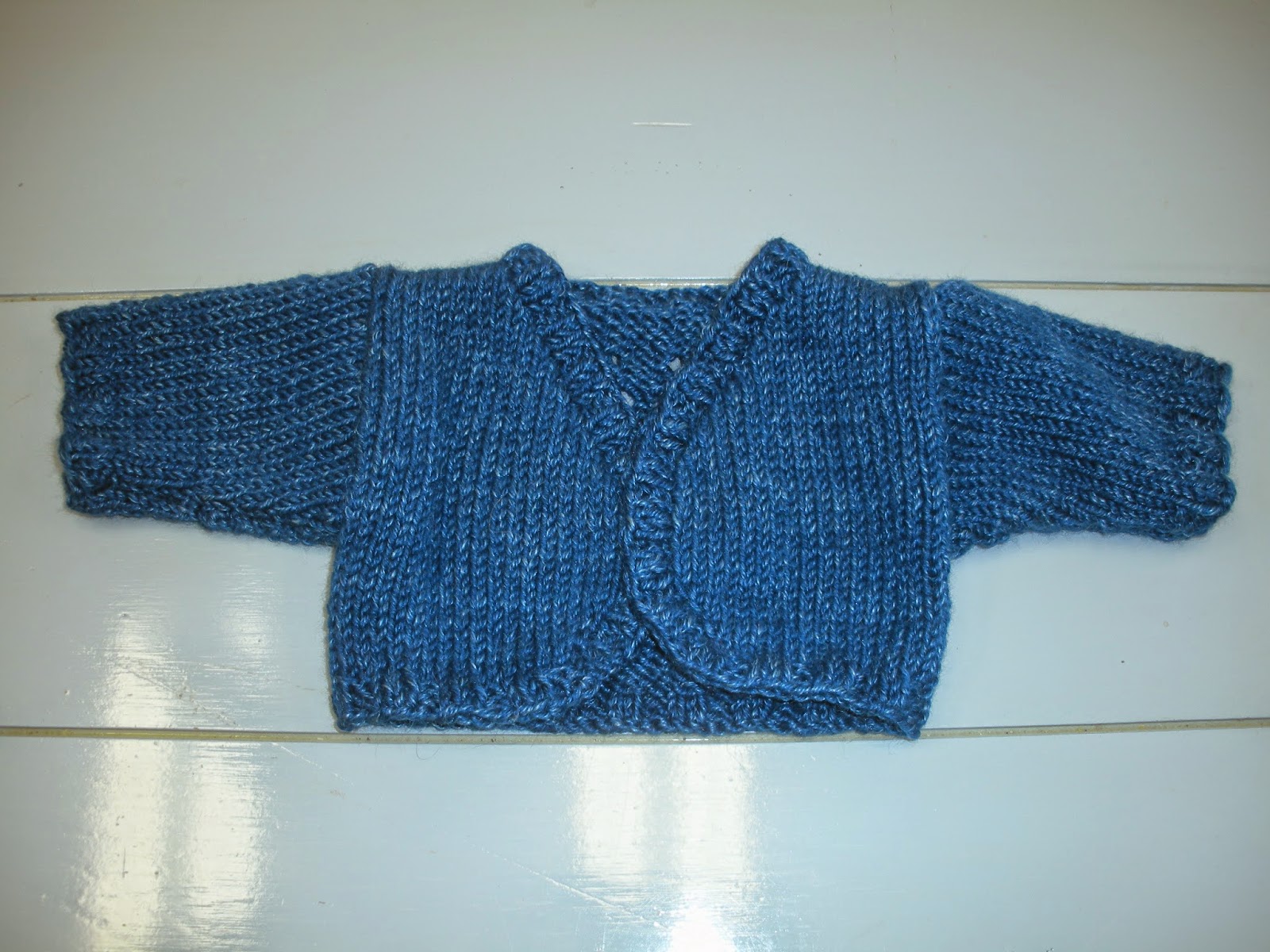 Note the cute bit of decoration in the back: 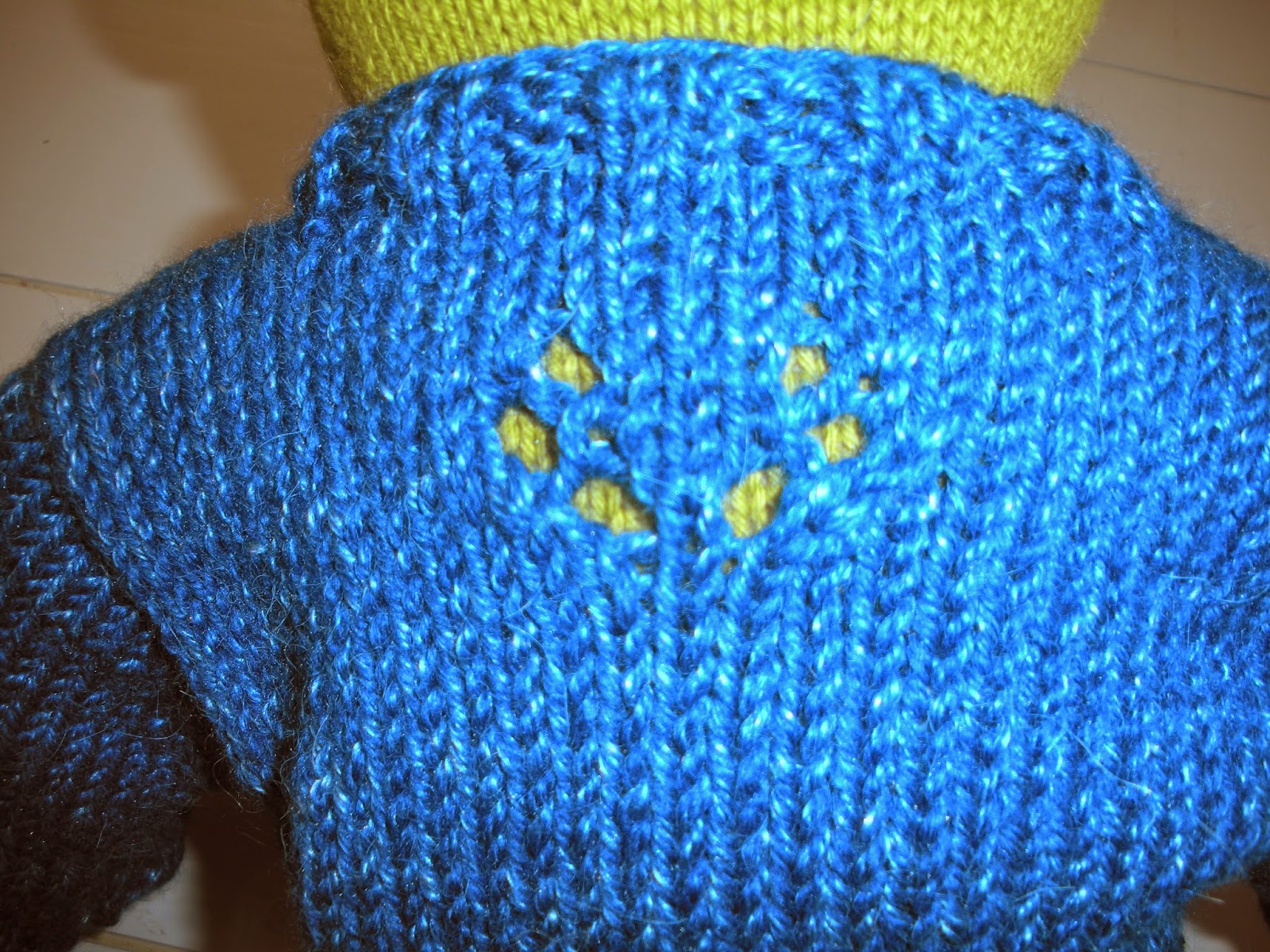 I only had to frog here and there because I was busy chatting with people and not completely paying attention to the perfectly clear directions!
Posted by captainhook at 1:17 PM No comments:

One of the most amazing quilts I've seen was at the Seven Sisters Quilt Show in San Luis Obispo recently.  I have been fascinated with Log Cabin patterns and house patterns for a long time, in part because I have moved so often.  Lots of ideas have been percolating in my brain about how I would do a quilt of many houses.  Then I saw this! 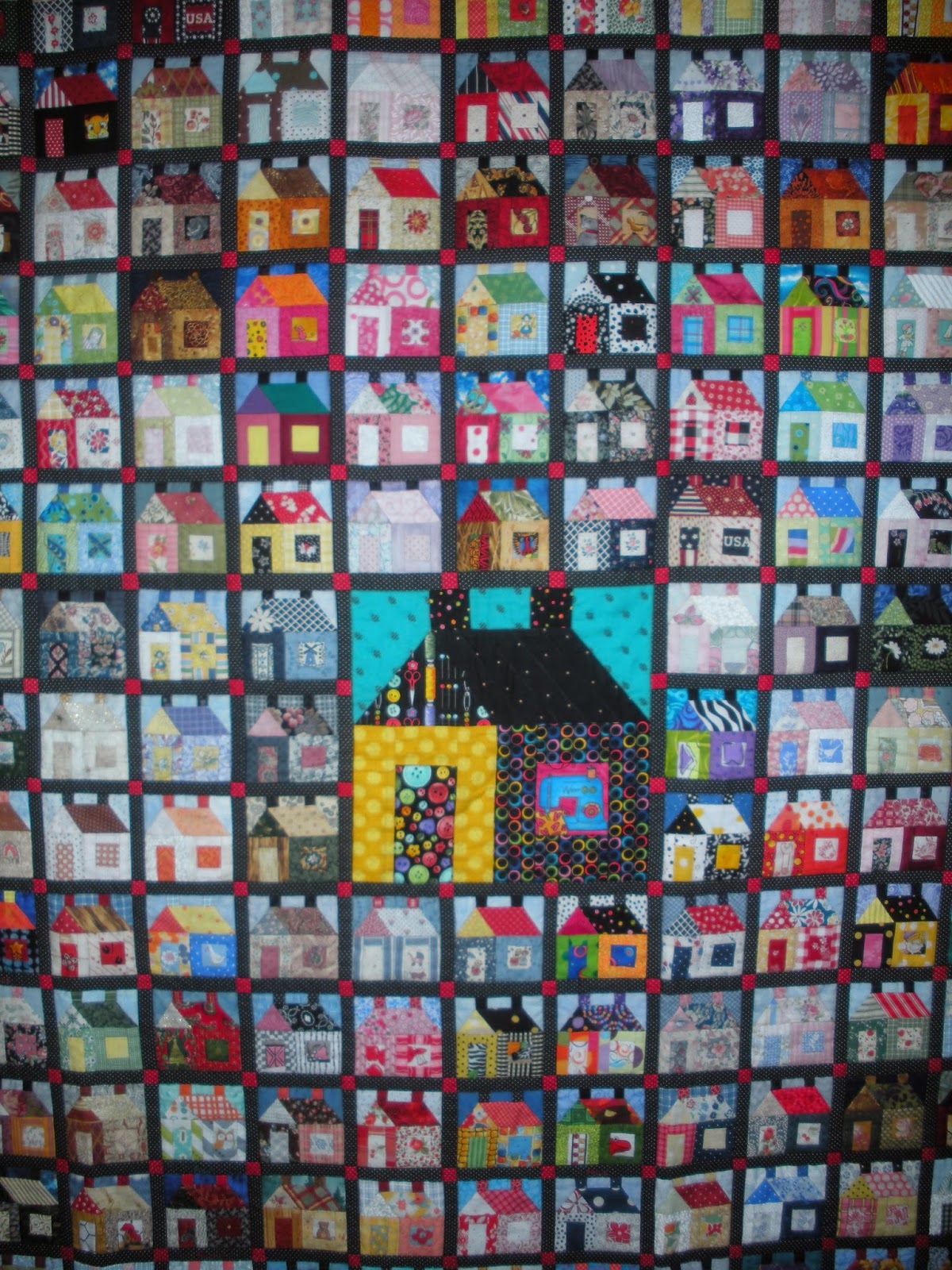 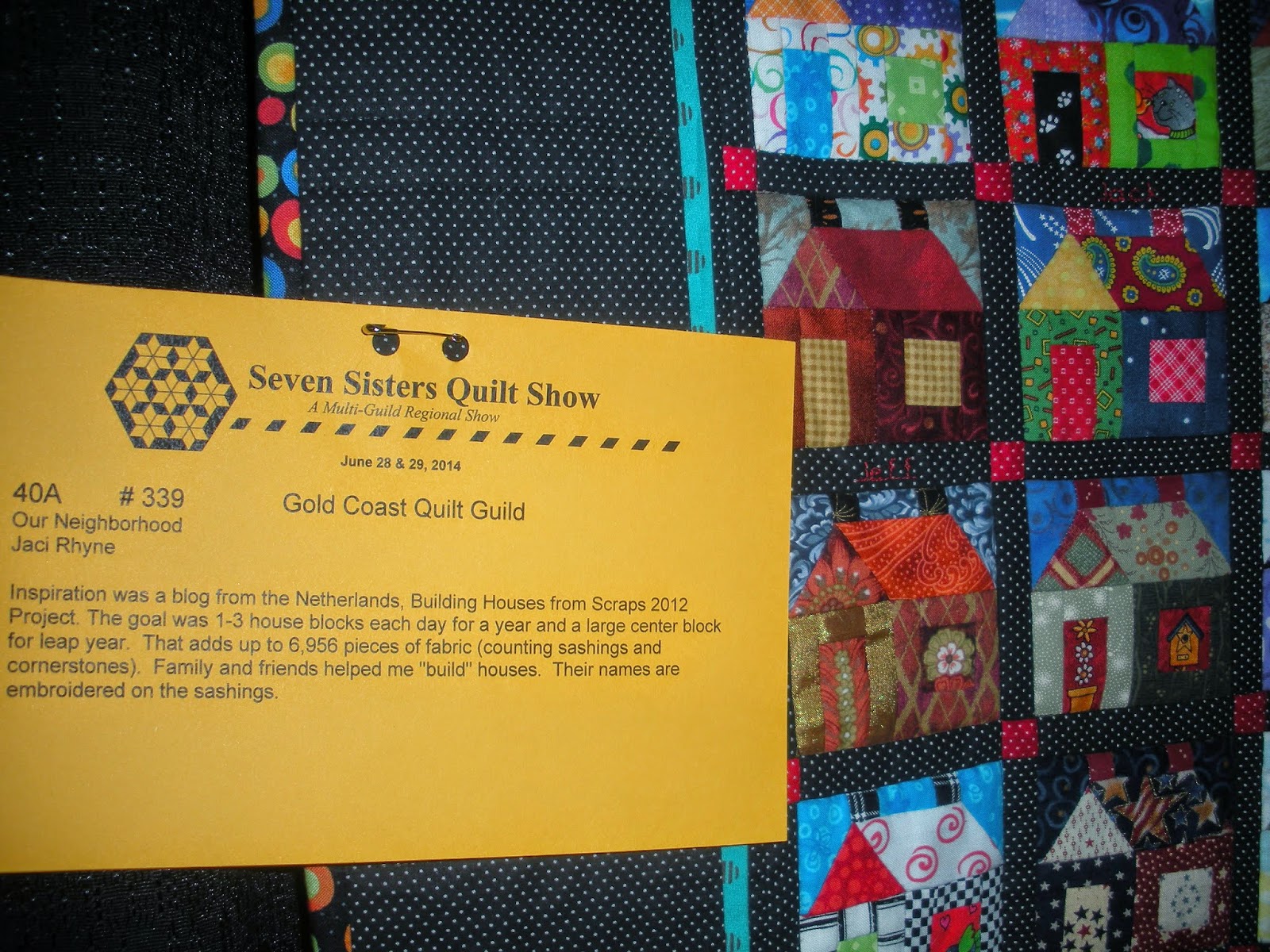 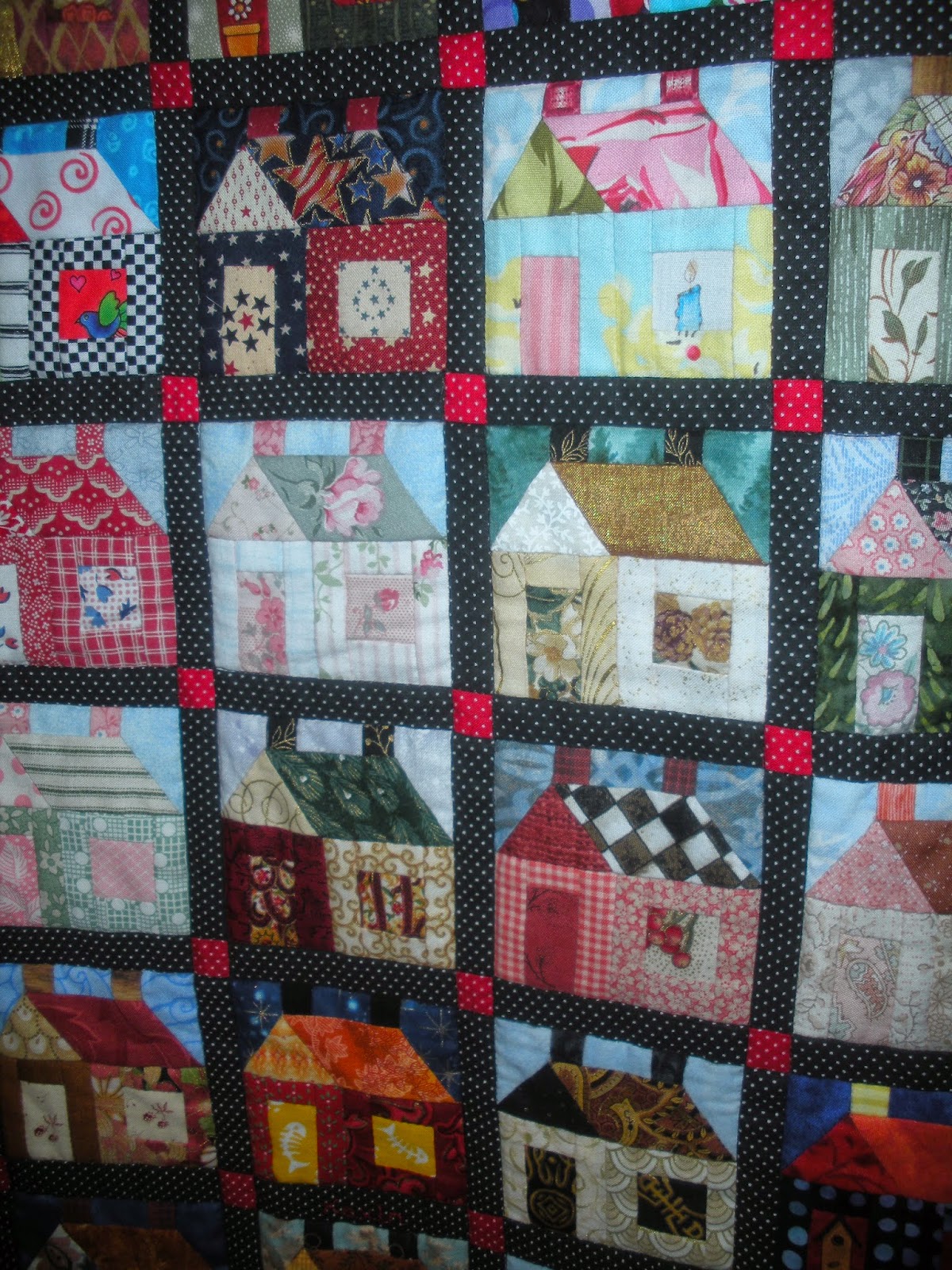 And read about it, above, and went to the Building Houses from Scraps website.

I don't know if I would make one myself, but it certainly gets the creative juices flowing!
Posted by captainhook at 12:37 PM No comments: