A long time ago, I journeyed in my imagination to a wondrous land where every sweater I knit fit me just the way I wanted it to fit.  Sweaters were never too tight under the armpit, or too saggy and heavy in the sleeve, too baggy in the waist, itchy in the neck, too short or too long, but just right.

In reality--THUD (that sound is me coming back to reality)--as a new knitter, the first sweater attempts I made were less-than-wondrous.  The first was made of cotton yarn.  Turns out, cotton is heavy and does not hold its shape, especially when you are a woman of Traditional Build and you need at least twice as much yarn as the usually-smallest-size-sweater sample on the teeny-tiny model who looks so dang cute in the picture on the pattern.

The knitting itself on my first sweater wasn't bad, the pattern was fine, but I couldn't even give it away among my friends, and it certainly wasn't something I was going to wear.

Off to Goodwill it went, a brand new, hand knit yet ill-fitting sweater.  I hope it found a home.

Sweater #2 I nicknamed "Gargantua."  (What, not Frankensweater?!)

In this case, oblivious to my body type (perhaps traveling mentally in that other wondrous world where everything fit me because I was still 28 years old) I used Super Bulky yarn.  It was very nice yarn, and the sweater did actually fit, sort of, but it was boxy and Super Bulky, and it also had some mohair in it, and the shedding and "bloom" of that mohair got to be annoying.  Too much bloomin' fuzz!

I think that one ended up as a rescue sweater as well, although I salvaged the beautiful silver buttons first.

Other better sweaters came off my needles in time, and they began to fit a bit better, and then I found the book Big Girl Knits.  This book has a "recipe" where you are supposed to be able to customize a sweater to fit you perfectly.  Let there be rejoicing in the land!

I and a friend took an afternoon to measure each other's various dimensions.  These were not just bust and waist and hip, these were back and shoulder and forearm, and lengths and widths of things I never really thought about measuring before.  (See above, "Sweaters That Do Not Fit.")

Armed with this magical mathematical knowledge, I shopped for yarn.  I settled on a gorgeous lavender, heather-y baby llama, Miski by Mirasol.

The otherwise splendid, knowledgeable people at my then-LYS neglected to mention that baby llama, like alpaca, while delightfully drapey and soft, gets very heavy and loses its shape.  Especially when you need enormous quantities of yarn for a Grown-Woman-Who-Is-Not-a-Model Sized Sweater.

Hm, yes, well, I was knitting and knitting, and following the recipe in the book, decreasing dutifully at the waist, and increasing after, and doing short rows for the absurdly ample bust, and cleverly doing a nice vee-neck which suits my Traditional Build, and at last I cast off and sewed the pieces together, and having finished my masterpiece enough to try it on, BEHOLD!

It was so drapey as to be downright revealing.

The vee-neck was plunging in a way that would suggest a starlet's gown at the Oscars, but trust me, I am no starlet, Scarlett.  And even those clever decreases were not enough to cinch in that saggy waist.

It was, in a word, deplorable. 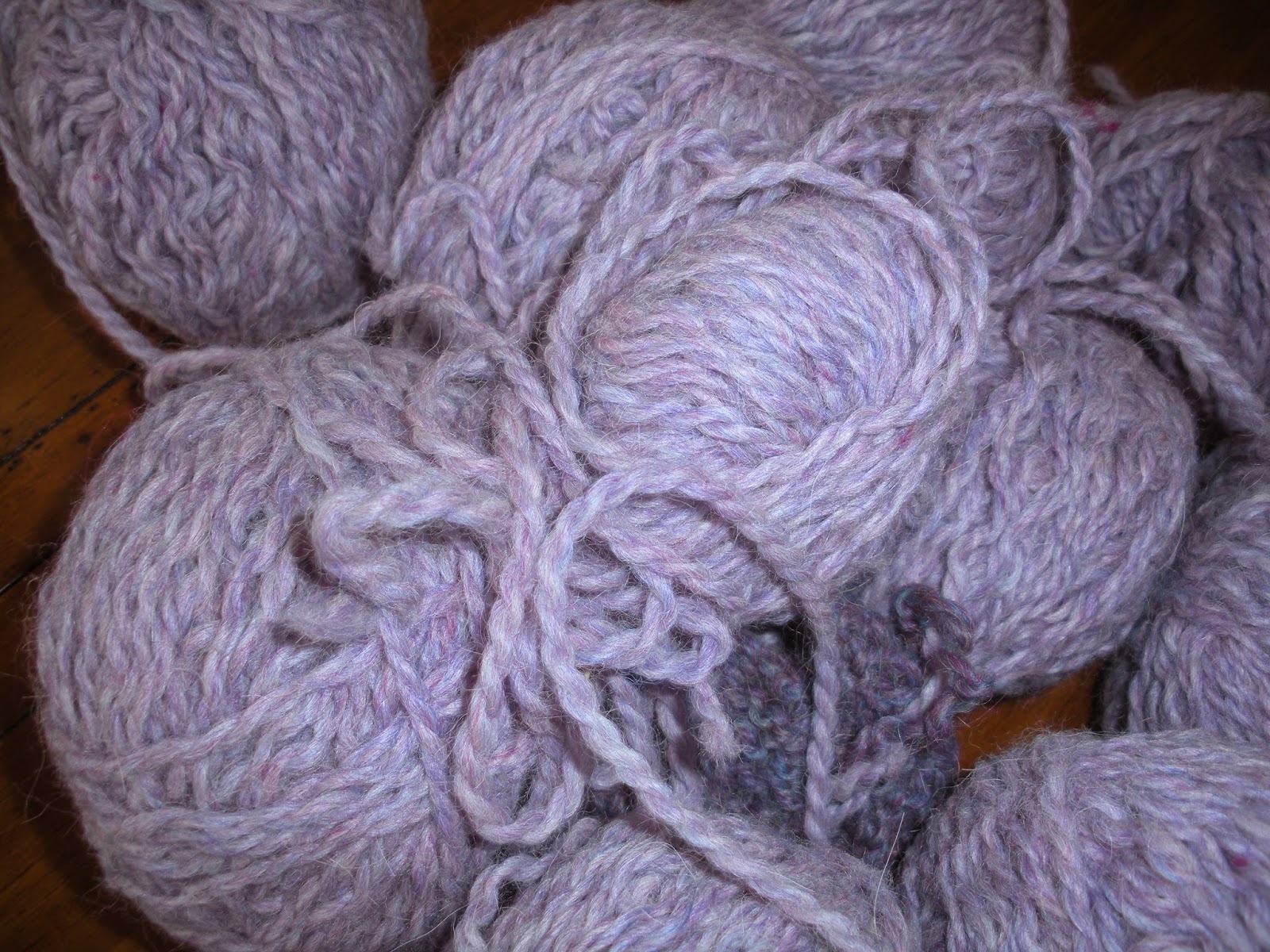 So, for several years now, I have had a big bag full of crinkled, crumpled balls of yarn, old and used, never to regain the youthful spring in their step(s).

A vague memory came to me, of someone, somewhere, who repurposed old sweaters, or was it someone else who asked someone somewhere, how do you get the crinkle out of old yarn?

And the answer bubbled up into my brain like expensive champagne.

Yes, it was time to go to the yarn spa again!  (And now that the Festive Fish are gone, it's quiet and restful there.  They were such a rowdy bunch.)

I didn't even bother to google the topic.  I'm such a wild, carefree gal, I trusted my memory.  I wound one small ball of that used yarn into a hank, tied it in a couple of places, threw it in some cold water, and let it soak for a few minutes, just long enough to get the fibers wet.

Then I rolled it in a towel and let it sit for a minute or two, just to get the major dampness out, and then I hung it on a dryer rack and let nature run its course.

So I wound all the old yarn into hanks… 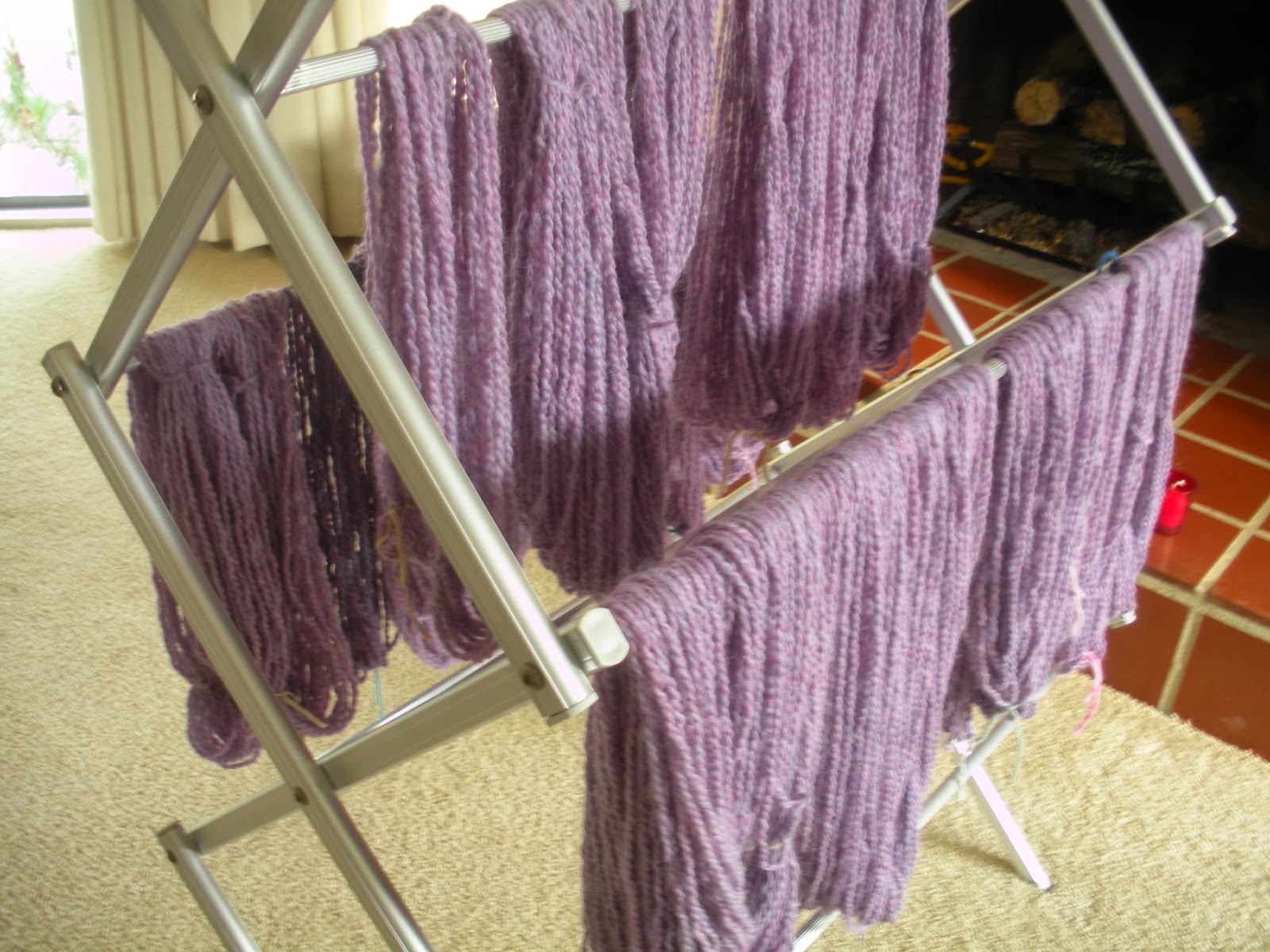 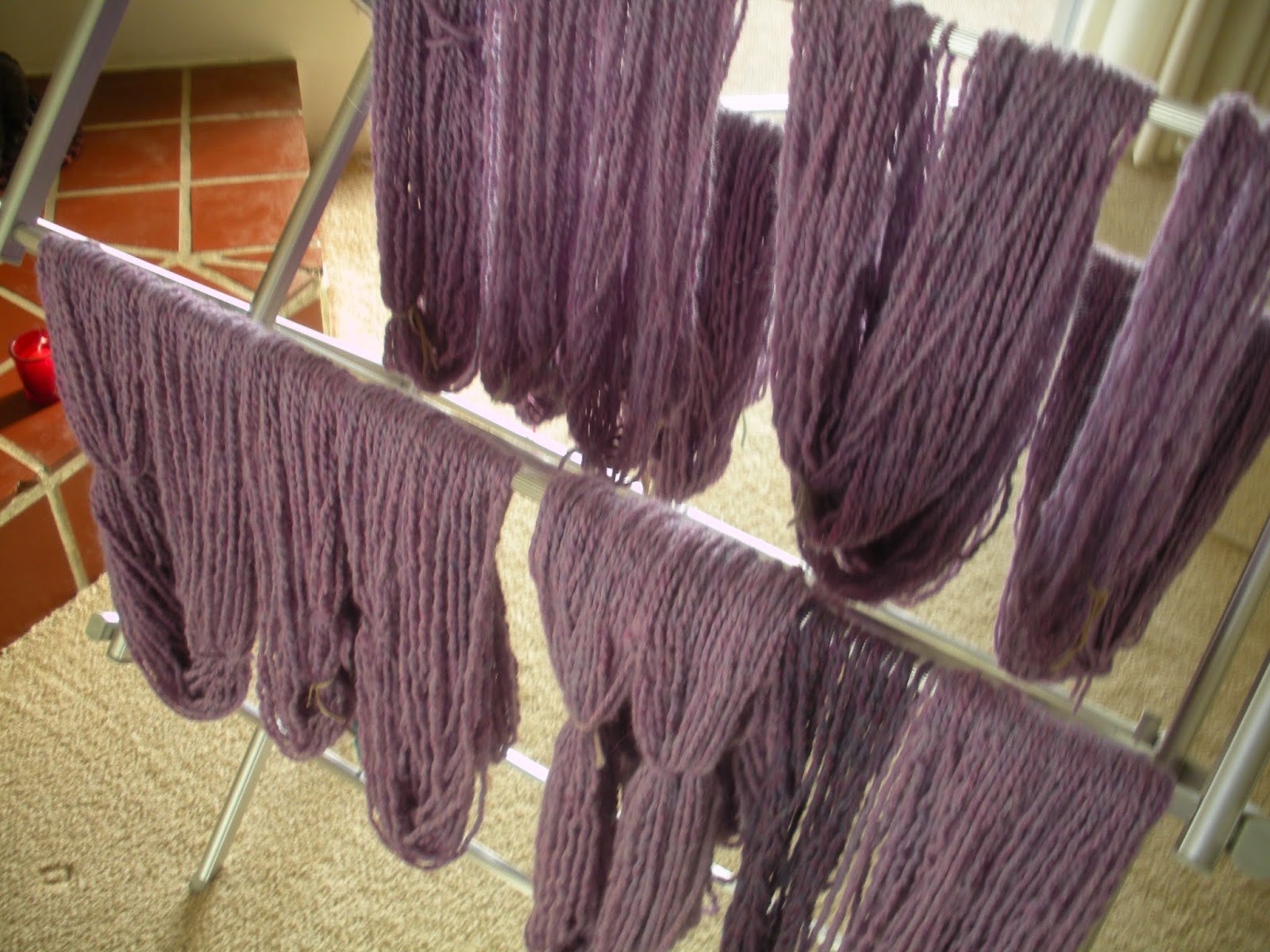 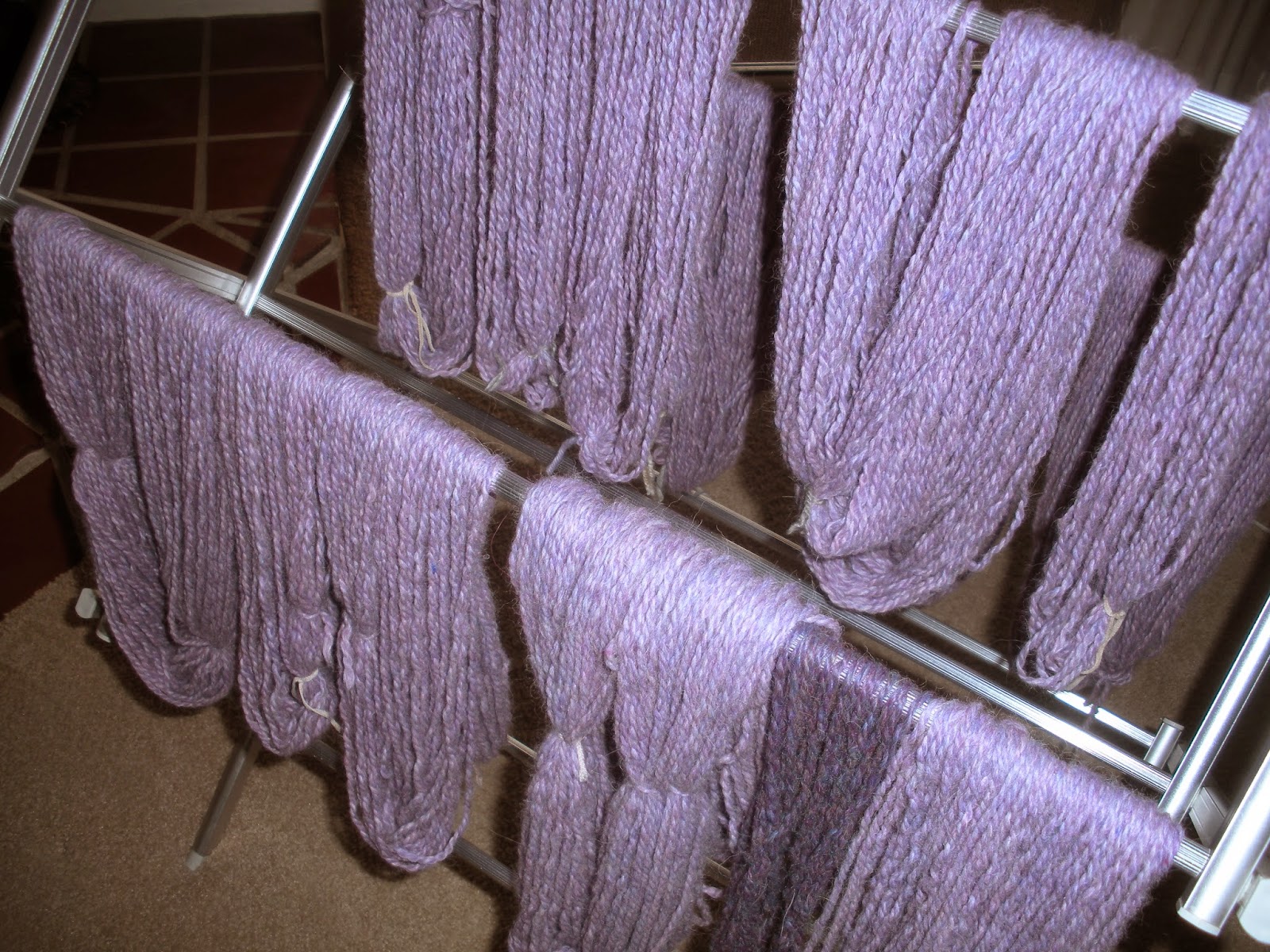 While the yarn was still wet, it did not look promising.  But once it was dry, it was perfectly lofty and lovely again! 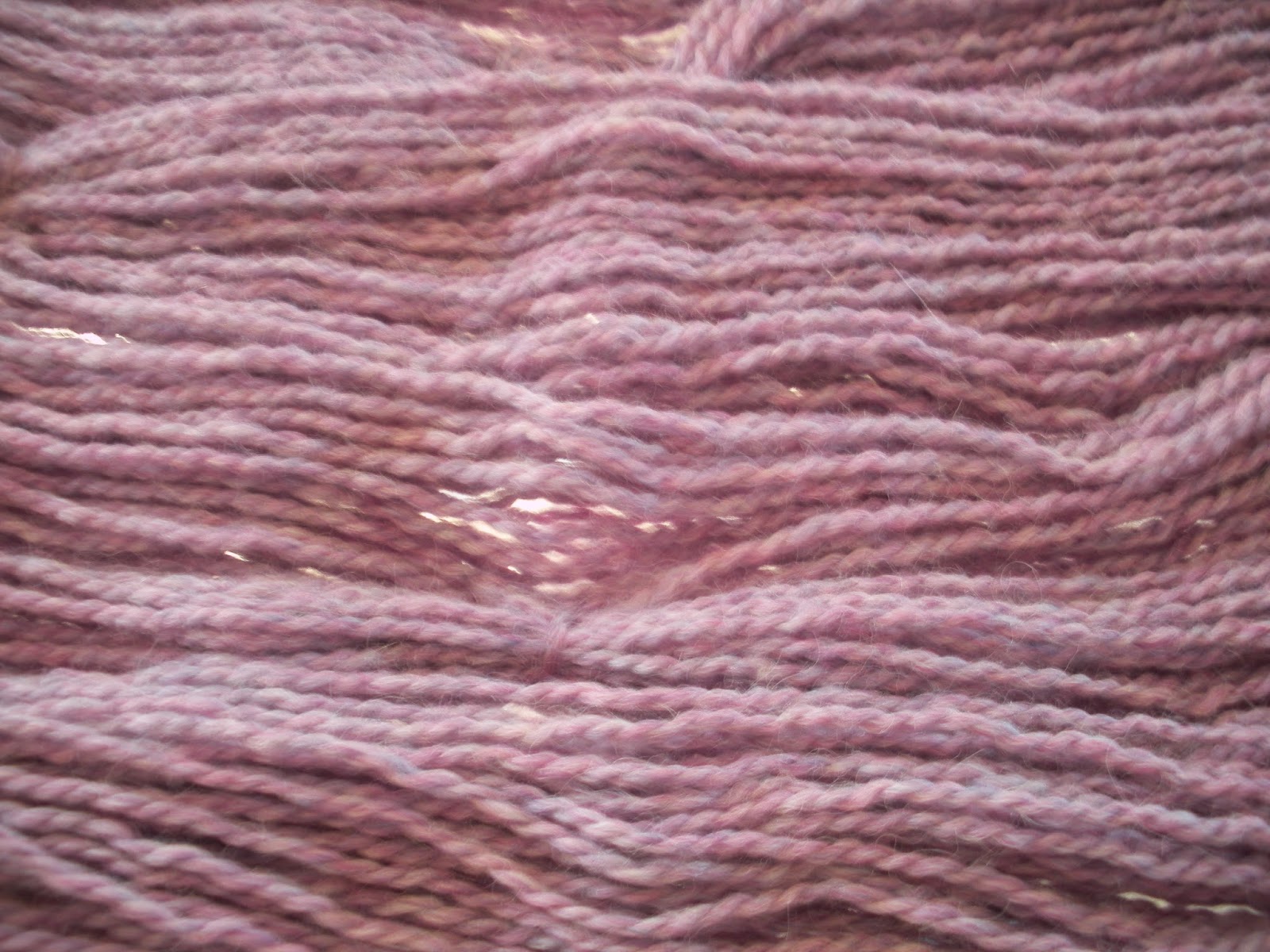 Now I have a great big honking pile of pretty yarn again, and I know now that baby llama is great for scarves and cowls and fingerless gloves and all manner of small things that will not drag themselves into never-before-seen and totally unsuitable shapes due to the force of gravity and the power of stretchiness. 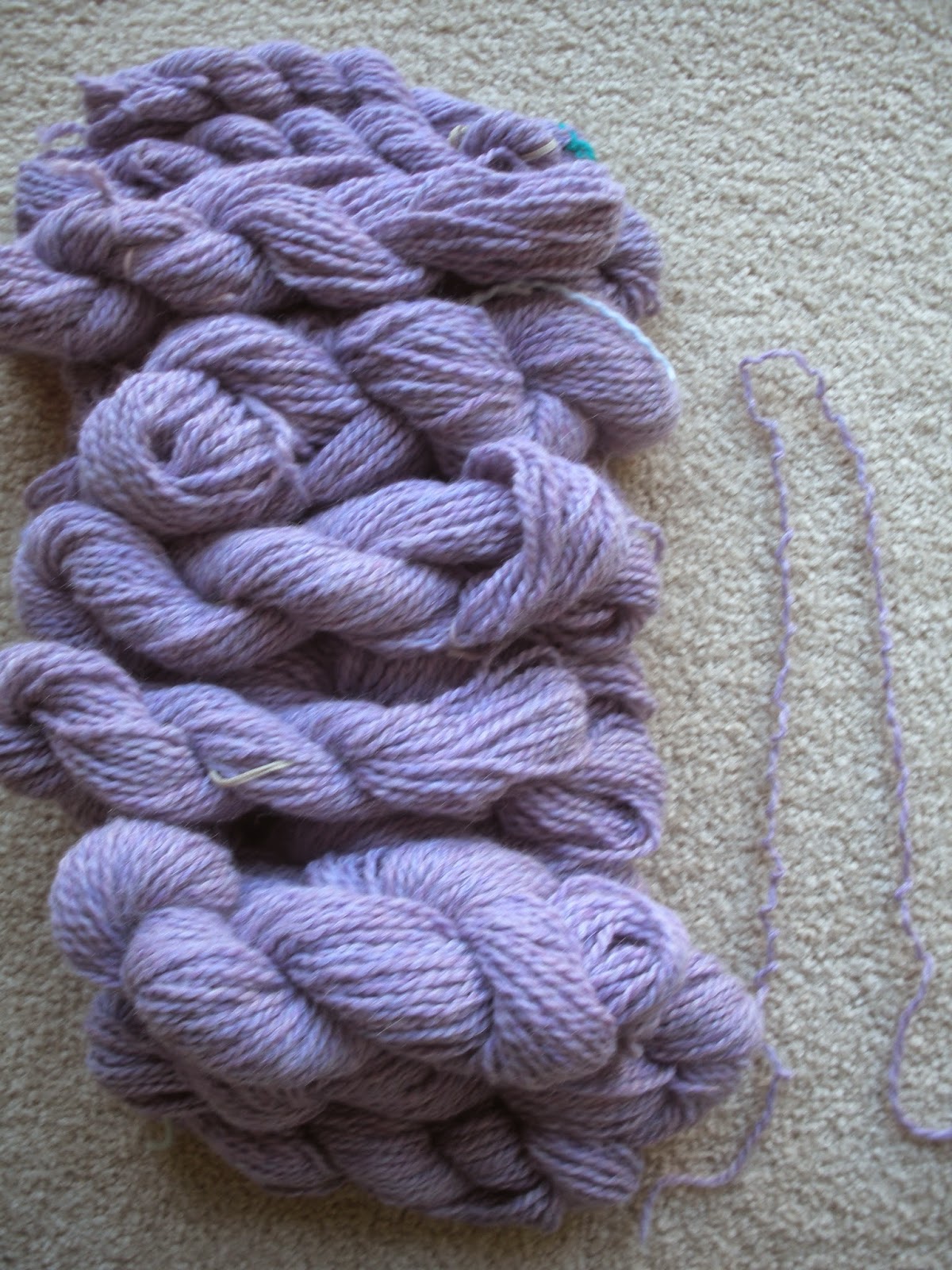 Posted by captainhook at 5:41 PM