A Yarn Stab from the Past

One of my crochet students, Kathy L., brought in this huge blanket, a family heirloom.  With her permission, I have pictures for you. 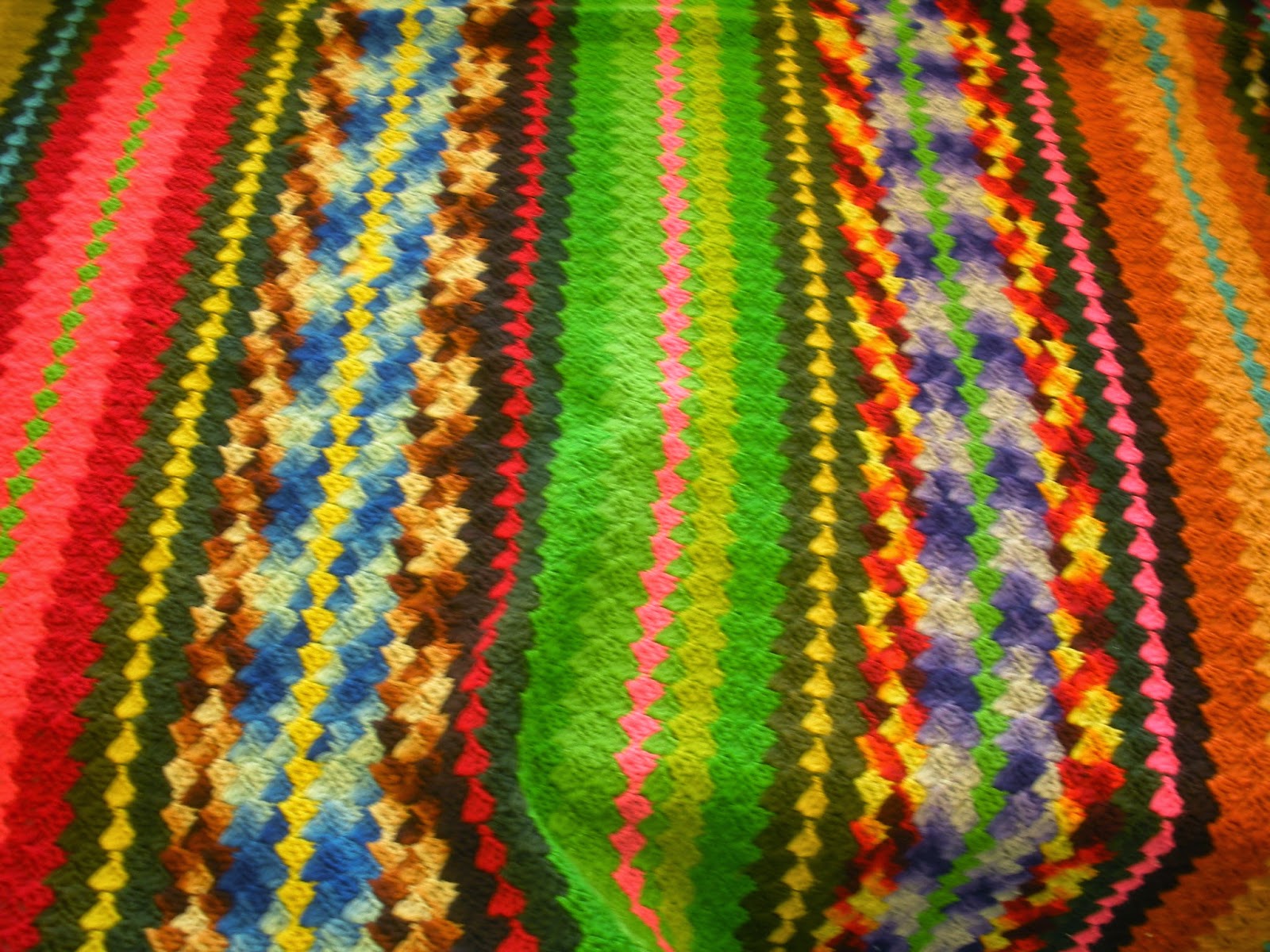 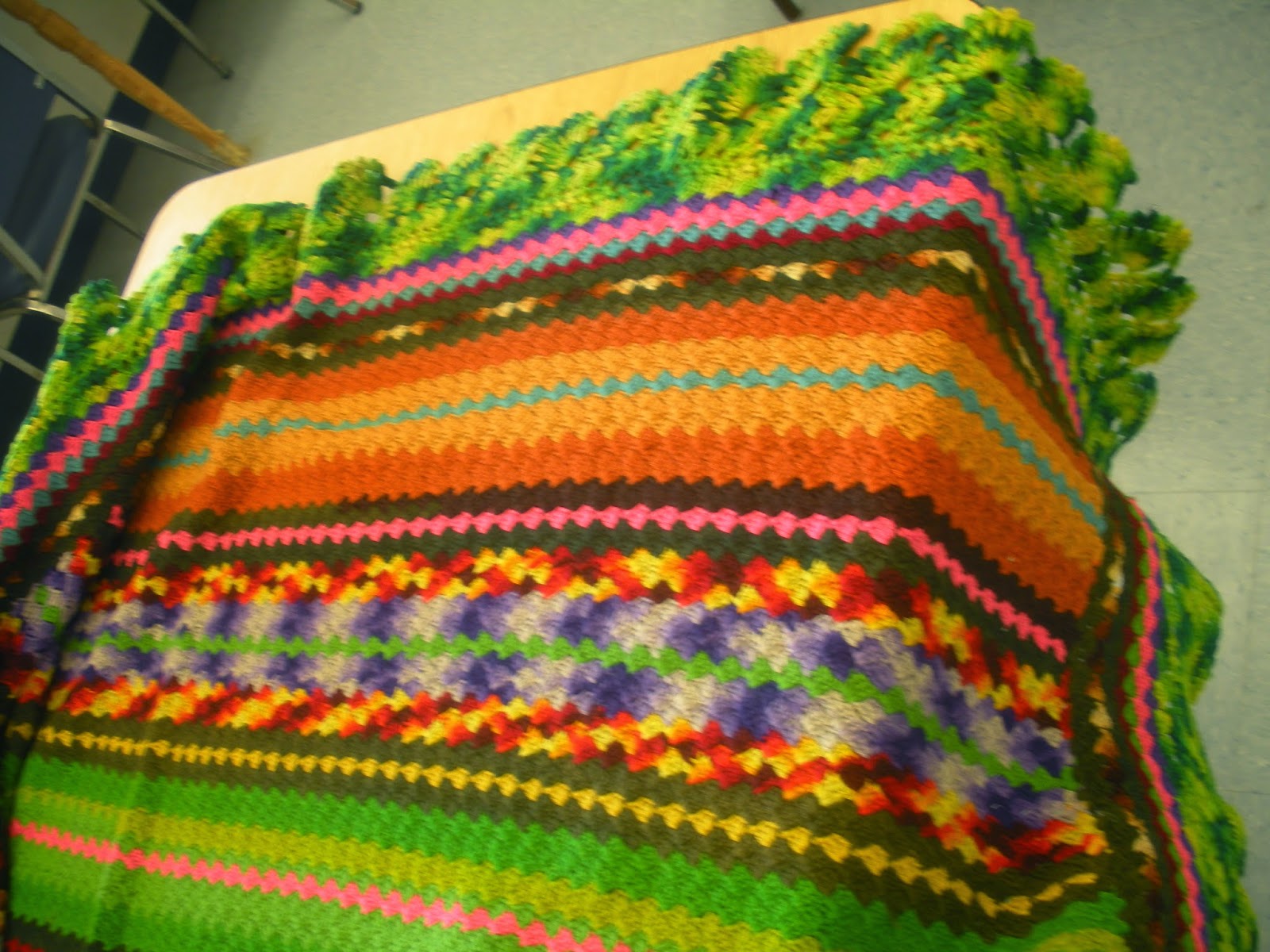 She wasn't sure how old it is, but here is some history she has given us:

We all gathered around and tried to determine whether it was acrylic or wool or what, and therefore, when the yarn would have been manufactured, so we could get a better idea of when the blanket was made.

It seemed to be a combination of types of fibers, in the spirit of thriftily using up scraps.

Some of those bright colors and variegated yarns sure do look like good old Red Heart.  I just checked the Red Heart website, and they say they have been making their yarn for 75 years.  So… maybe, maybe not. 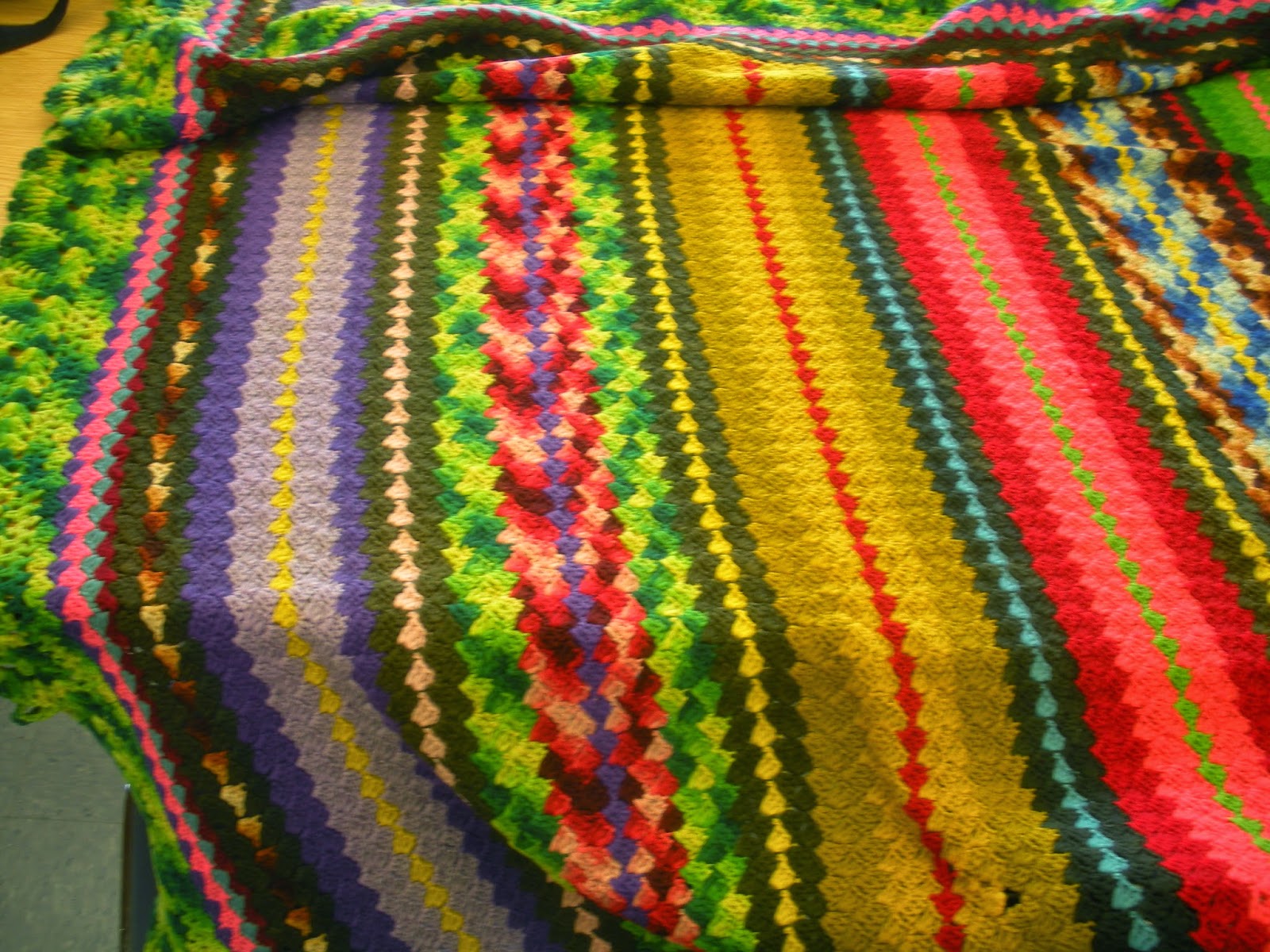 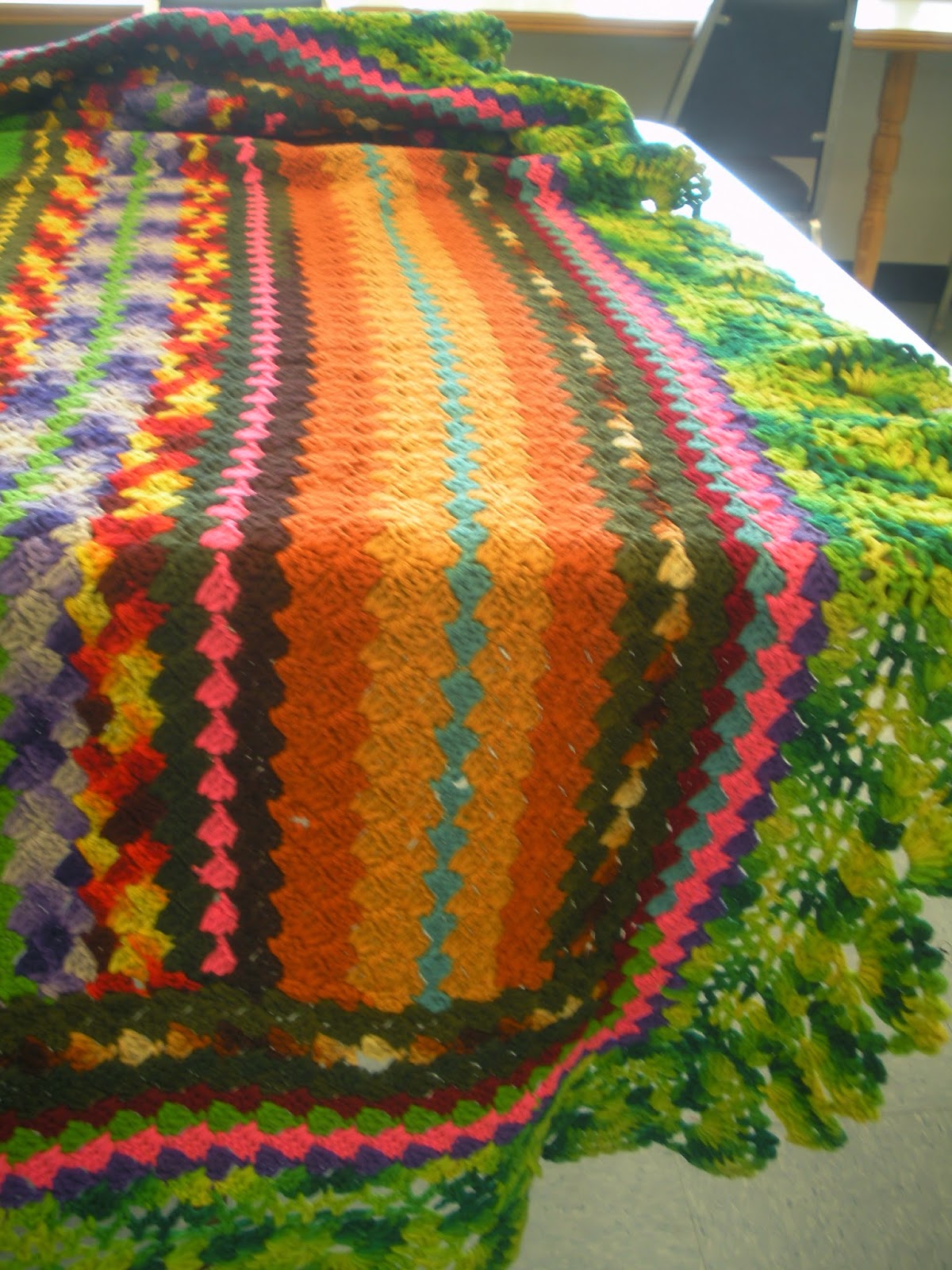 It's a simple but effective shell pattern, with a fancier border of arches tacked together with a tiny bit of thread so they would hang together.  Not sure I would want to bother with the thread myself, but it was interesting to see.

My favorite color combo is the Southwesterny one of turquoise and earth tones.

Time and use and maybe a moth or two have created a couple of holes in the blanket, and a couple of strands of yarn were poking out.

One woman was eager to try a burn test to figure out the fiber content, but a chorus of students and myself hastily nixed that idea, to the relief of the owner!
Posted by captainhook at 1:02 PM 2 comments:

Doesn't the "long-tail" sound like some kind of critter? 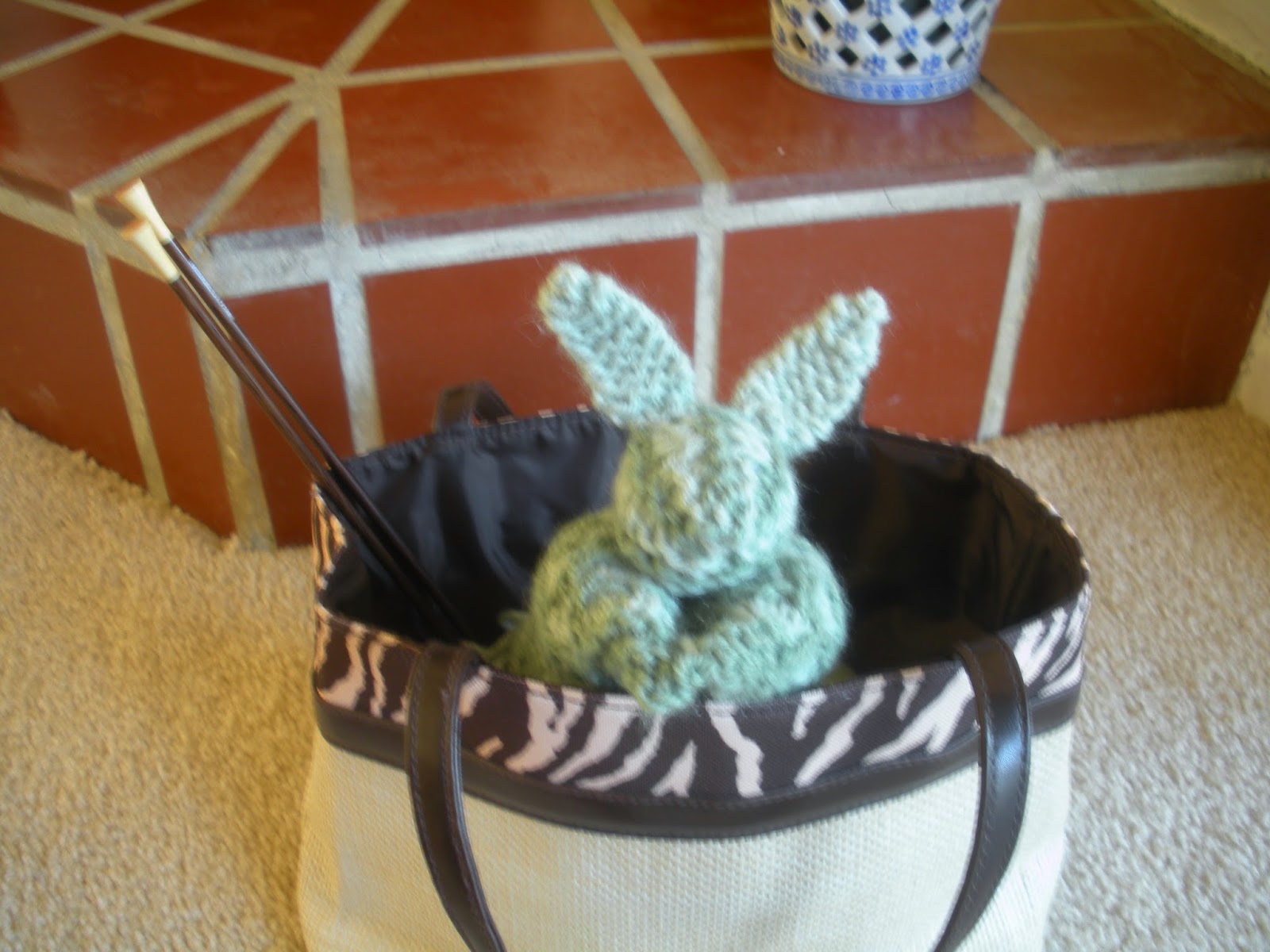 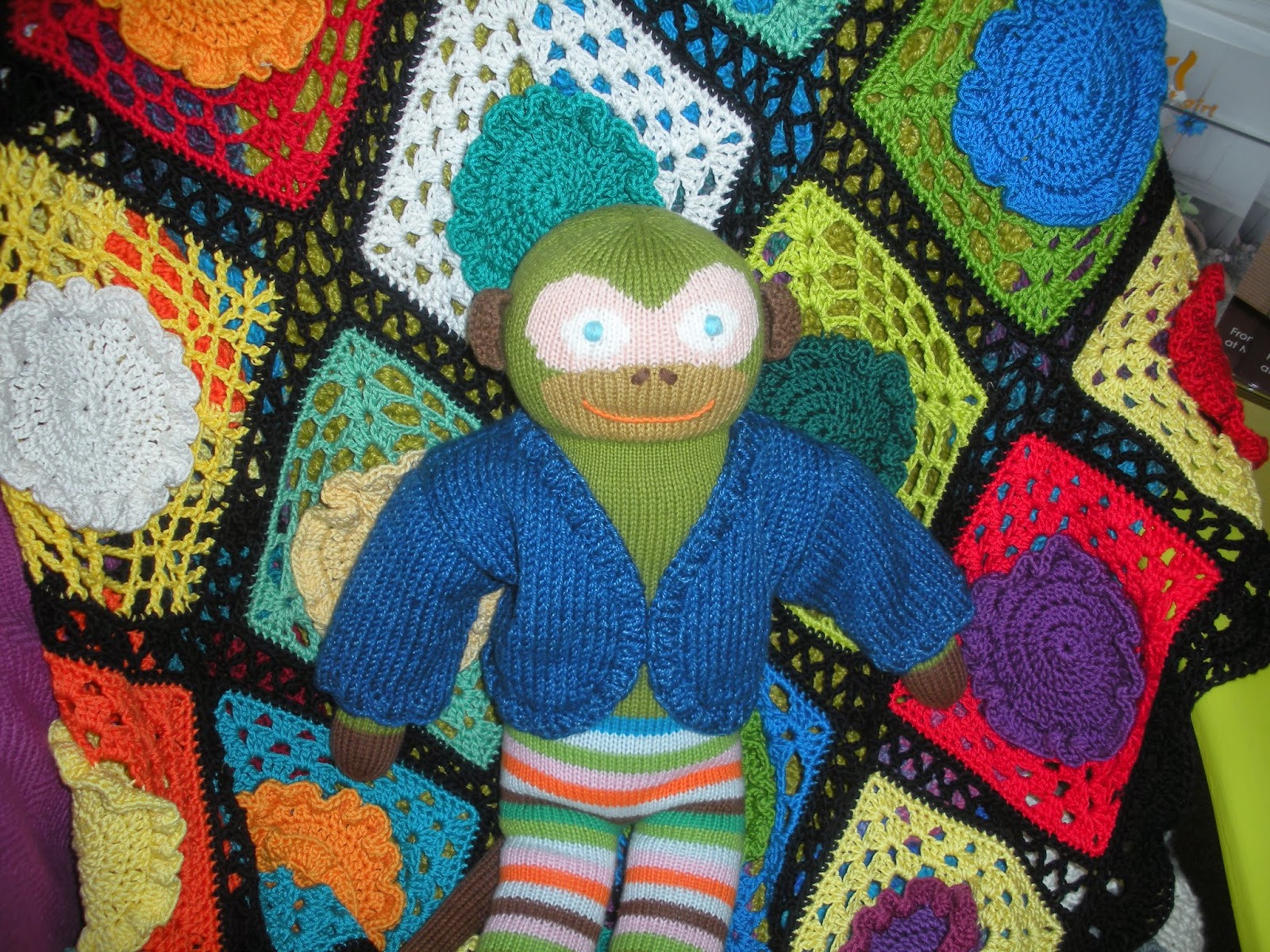 One definition of shrew is, according to my dictionary, "any of several small, mouse-like, insect-eating mammals…having a long, sharp snout and small, poorly developed eyes."  So it's not just a bad-tempered woman!

I can certainly relate to the poor eyesight (she said, squinting at the computer screen, raising and lowering her head to try to see clearly through her new glasses without straining her neck.  That's enough to make anyone a bit bad-tempered.)

But I have digressed.

Beginning knitters, a.k.a. "beknitters," often ask the infamous question that evokes fear and loathing in the most courageous of crafters, "How long a tail do I need?"

"Depends on which tree branch you want to swing on," is the obvious answer.

Seriously, folks, there are a number of ways around this dilemma (see below.  Way below.)  But sometimes, you just want to use the long-tail.  It's attractive, it's stable, and it's fun because you are doing this cat's cradle kind of thing that magically causes loops to appear on your needle.  It brings out the inner kid.

When I'm teaching beginners, I prefer to teach them the long-tail cast-on.  Unless they are really having trouble with it, I think a little extra time and persistence is worth it in the long run.  It's a good cast-on skill to have in your repertoire.

But that question, "How long a tail do I need?" comes up constantly, usually evoking rolling of eyes heavenward from all the other knitters at the table, as we chime in with various ways to wing it, because no one is 100% certain.

BUT NOW THERE IS HOPE FOR THE ENDANGERED LONG-TAIL!  ALERT THE MEDIA!
I recently read a tip in a knitting-related newsletter written many moons ago, a newsletter which I had stuck in a knitting folder labeled "Miscellaneous" and promptly forgotten.

This tip said that the length of yarn needed for the long-tail cast-on can be determined using the following formula.  For every 10 stitches, figure:

Oh, it sounded so enticing and reasonable!

"Eureka!" I said to myself, doing an inner dance on an imaginary tabletop.  Problem solved!

But then I did a little math.  My inner dance turned to a funereal mental march.

Say I wanted to knit a modest-sized baby blanket out of worsted weight yarn and I needed to cast on, say, 150 stitches.  Using the formula above, that would mean I would need 15 feet of tail?  5 yards?! Sounded fishy.  Long-tailed fishy.  Long-tailed, googly-eyed, bewhiskered catfishy.

So I pulled out various scrap yarns from the ol' stash, and a bunch of needles, and experimented.  All for you, dear reader.

Actually, for all of us.  Because wouldn't we all like to know a way to calculate this?  Not to be casting on 150 stitches and run out of tail at 147?  Whence cursing ensues?

Or not to have way more tail than any self-respecting shrew would need, regardless of tree branch selection, as noted above?  After all, "waste not, want not," as my mother always used to say and occasionally still does.  (Hi, Mom!) So here's some chunky weight yarn, starting with 15 inches as suggested, with 10 sts cast on, using an appropriate sized needle.

An acceptable tail on the left there, wouldn't you say?

The next pic shows a cast-on of 20 sts, starting with 30 inches of yarn as the formula suggests.  Note the increased length of tail! 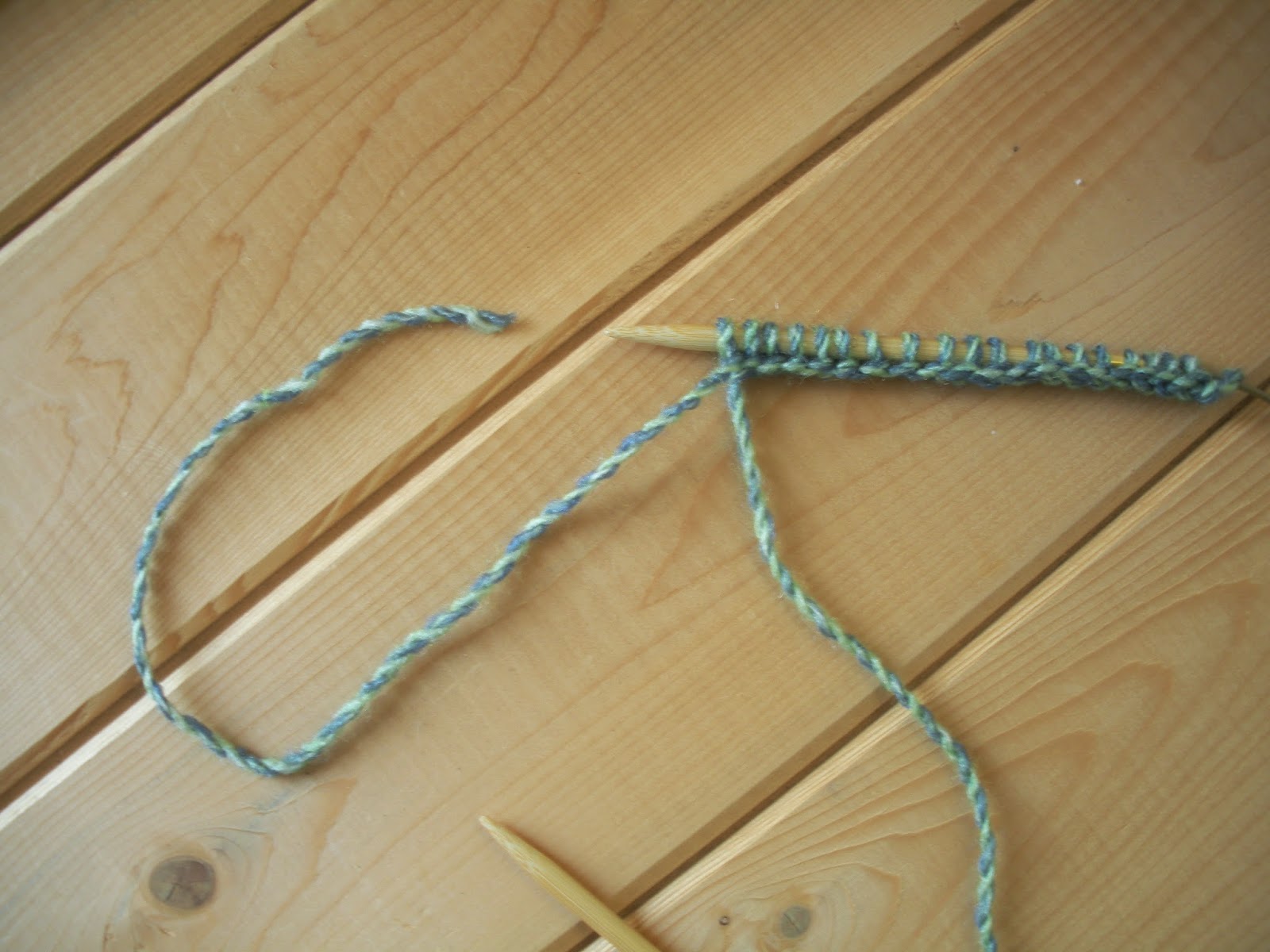 Uh-oh!  Imagine casting on many multiples of 10 stitches using 15 inches for each 10.  That there is gonna be one mighty long tail, gosh darn it.


But I did measure my previous acceptable tail length, and got 8 inches with my chunky yarn.  I subtracted 8 inches from the original 15 inches and got 7 inches (and you will too, if you do the math!)

That meant I really only needed 7 inches of yarn for each multiple of 10 cast-on stitches.

So if I want to cast on 20 stitches, that's 7 inches plus 7 inches plus 8 inches for the tail.  That's 22 inches, not 30 as the original formula suggests. 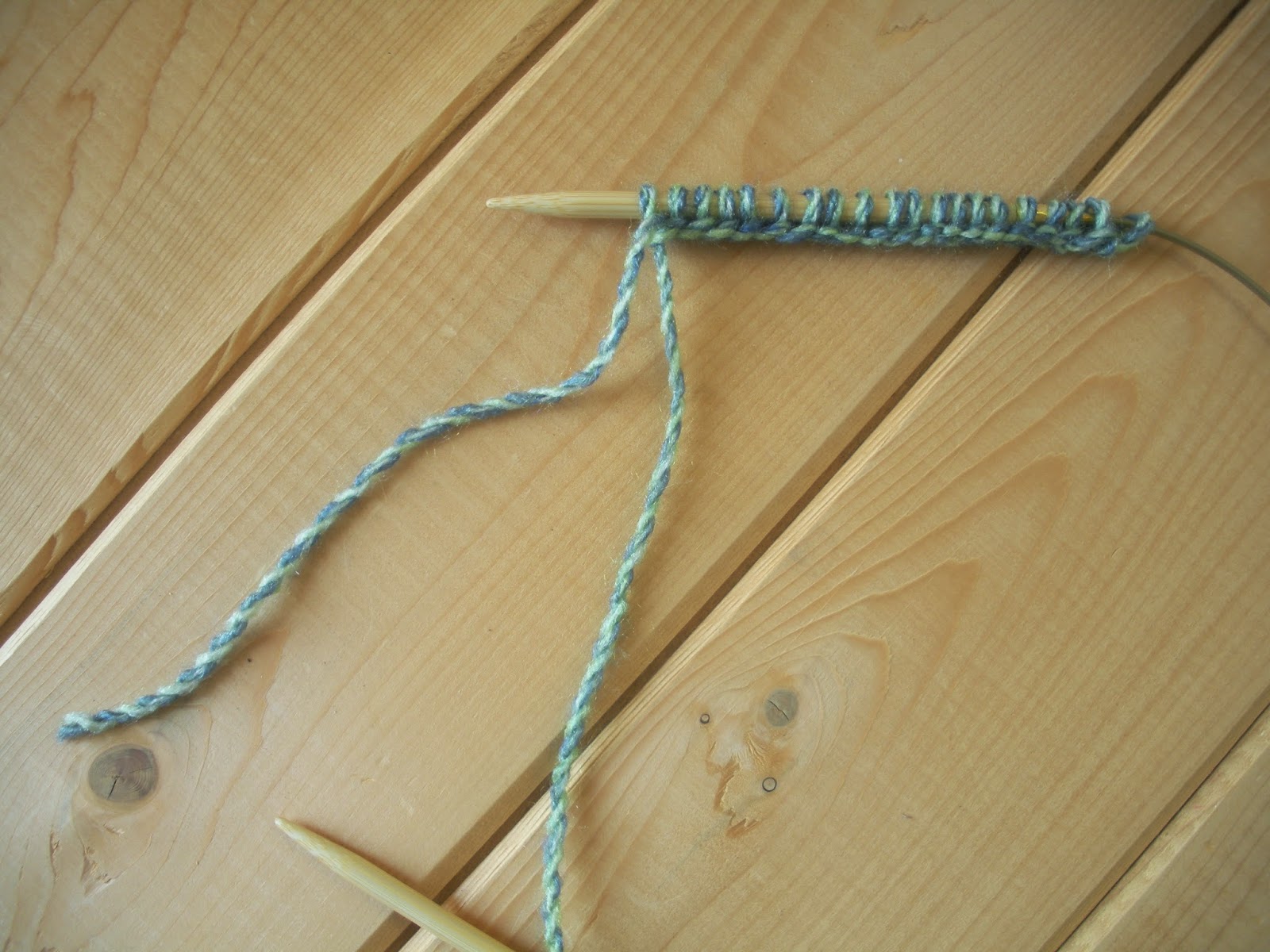 
You can figure this out any time you want to do a long-tail cast-on.  Whatever your yarn weight, whatever size needle you have.

You have to do some math.

I know a lot of people (hate to say it, but mostly women;  my apologies to the female math geniuses out there) who get instant brain freeze the second they hear the word "math."  They just assume it will be hard, so their brain gives up before they even try.

Trust me, most of you can do this!!!  You can even use a piece of paper and pencil, or a calculator--it isn't cheating!  And there will not be a pop quiz!

THE NEW IMPROVED LONG-TAIL CAST-ON FORMULA
I suggest using the original formula to cast on 10 stitches only.  To repeat, that's:

1.  After you cast on 10 stitches, if you're happy with your tail length, measure it!

2.  Subtract that tail length from the original length you started with.
3.  The remainder is roughly what you need for every 10 stitches.
4.  Divide your ultimate stitch goal by 10.
5.  Multiply that number by the remainder number.
6.  Add the tail length, and that's how much yarn you need to start.

Say I need to cast on 150 stitches with chunky yarn for a blanket.

2.  Subtract that tail length from the original length you started with:  15 minus 8 = 7 inches.  This is the remainder number.

Suppose I want to figure out how many yards that is.

I tried this whole procedure with 12 inches of worsted weight yarn and a #7 needle.  Note the nice tail length in the first pic, with 10 stitches. 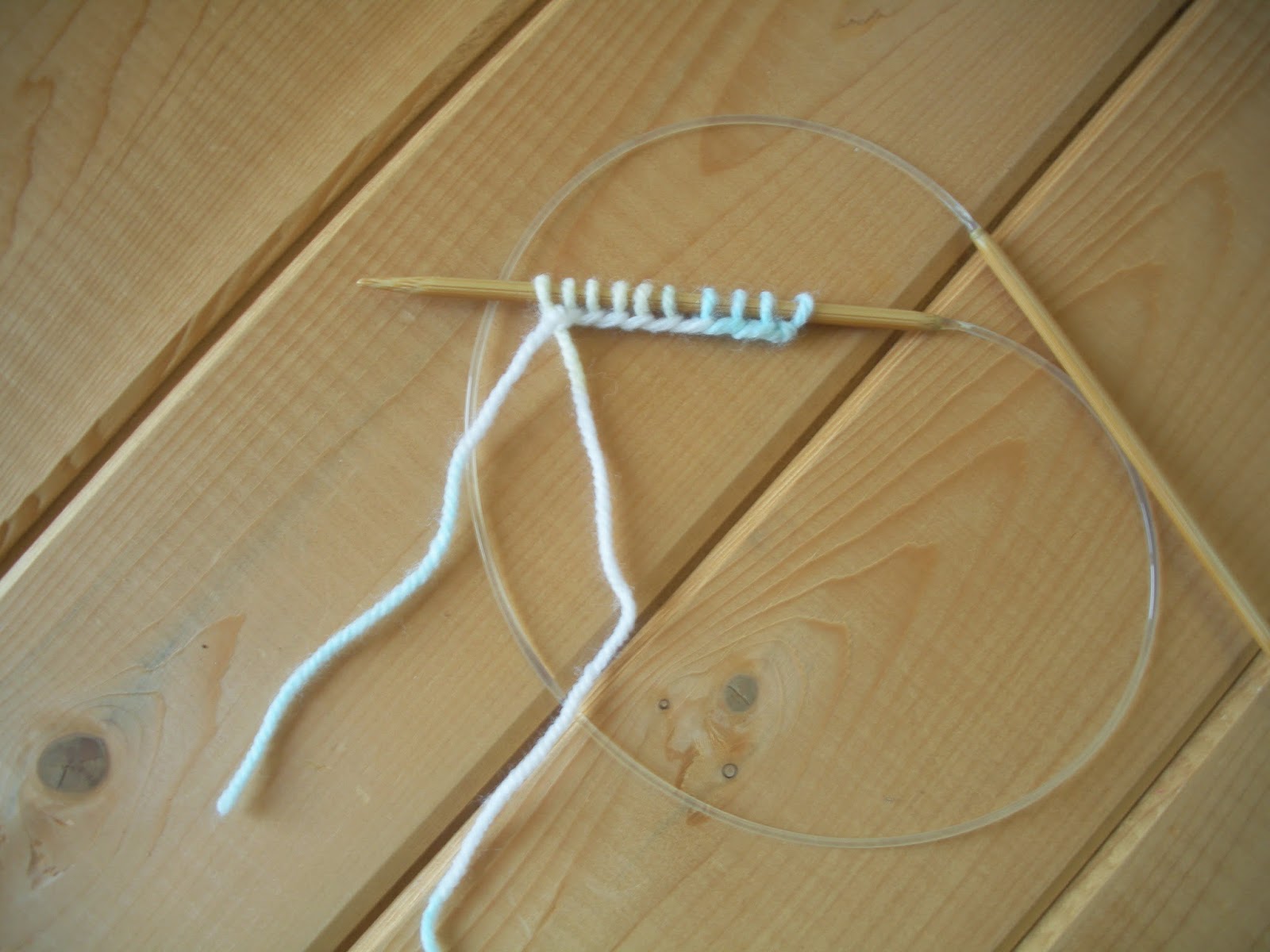 Next we have a slightly longer tail with 20 sts, using 24 inches of yarn according to the original formula. 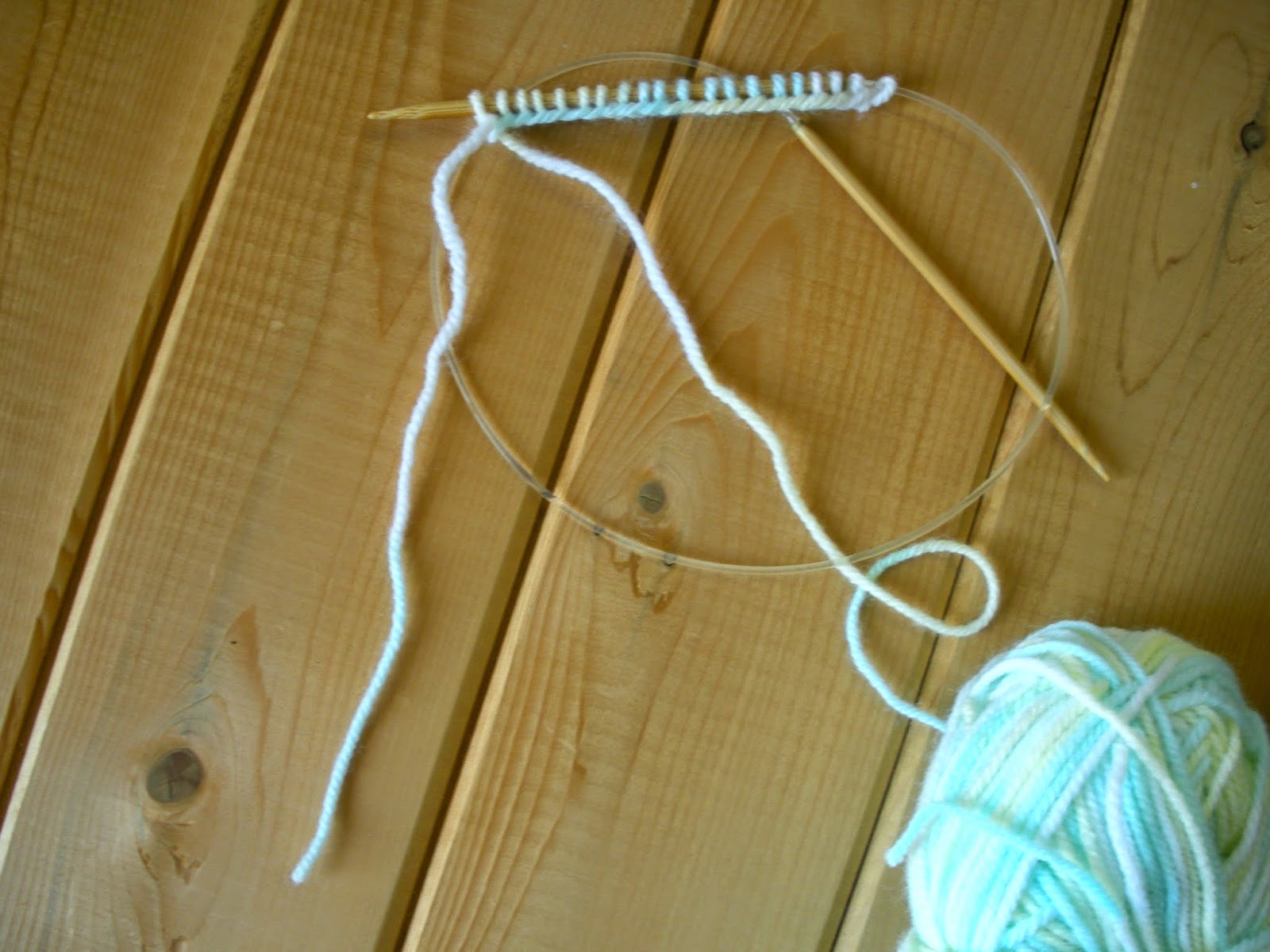 But, just to be prepared, I measured the acceptable length of tail from the first pic.  It was 5.25 inches.

The original 12 inches minus 5.25 inches gives me 6.75 inches, the "remainder number."  That's how much I need for 10 actual cast-on stitches with this weight yarn and this size needles. 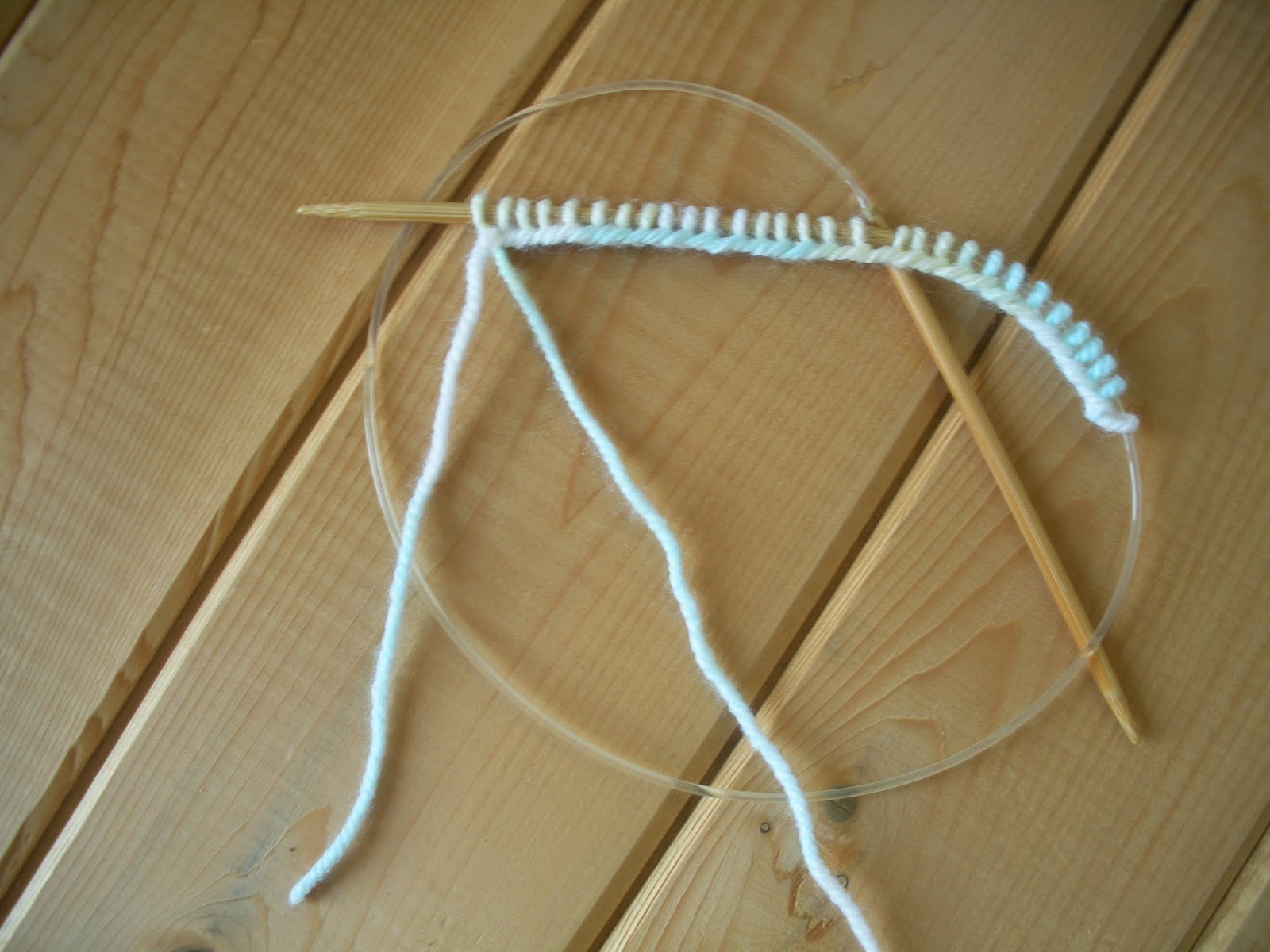 With my new, improved formula, even with 30 stitches cast on, I still had the perfect tail length!

"Eureka!" I say yet again, and this time I am still dancing!


Let's try it with DK weight yarn, shall we?


Here are 10 sts on an appropriate sized needle:
Peachy. 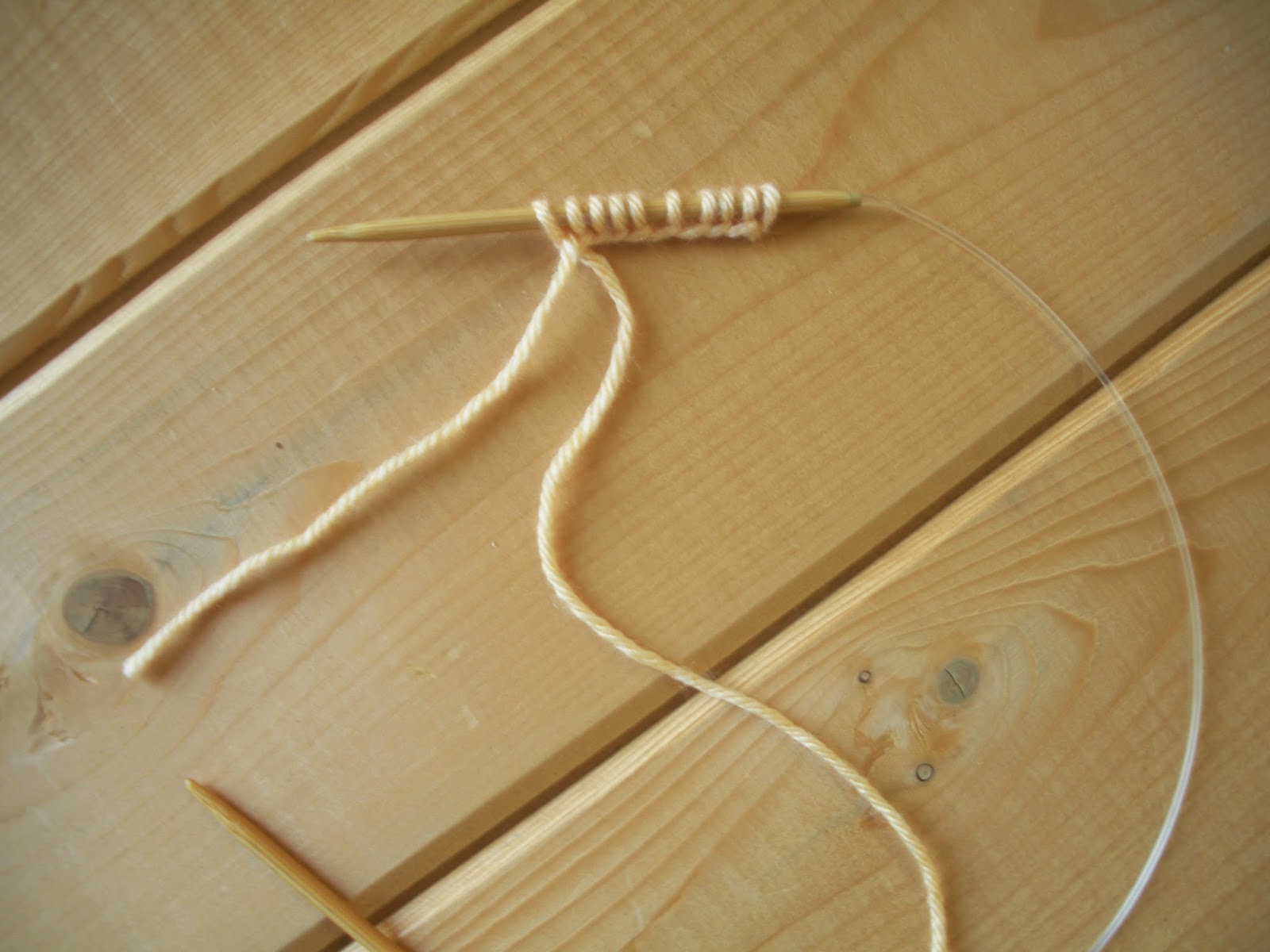 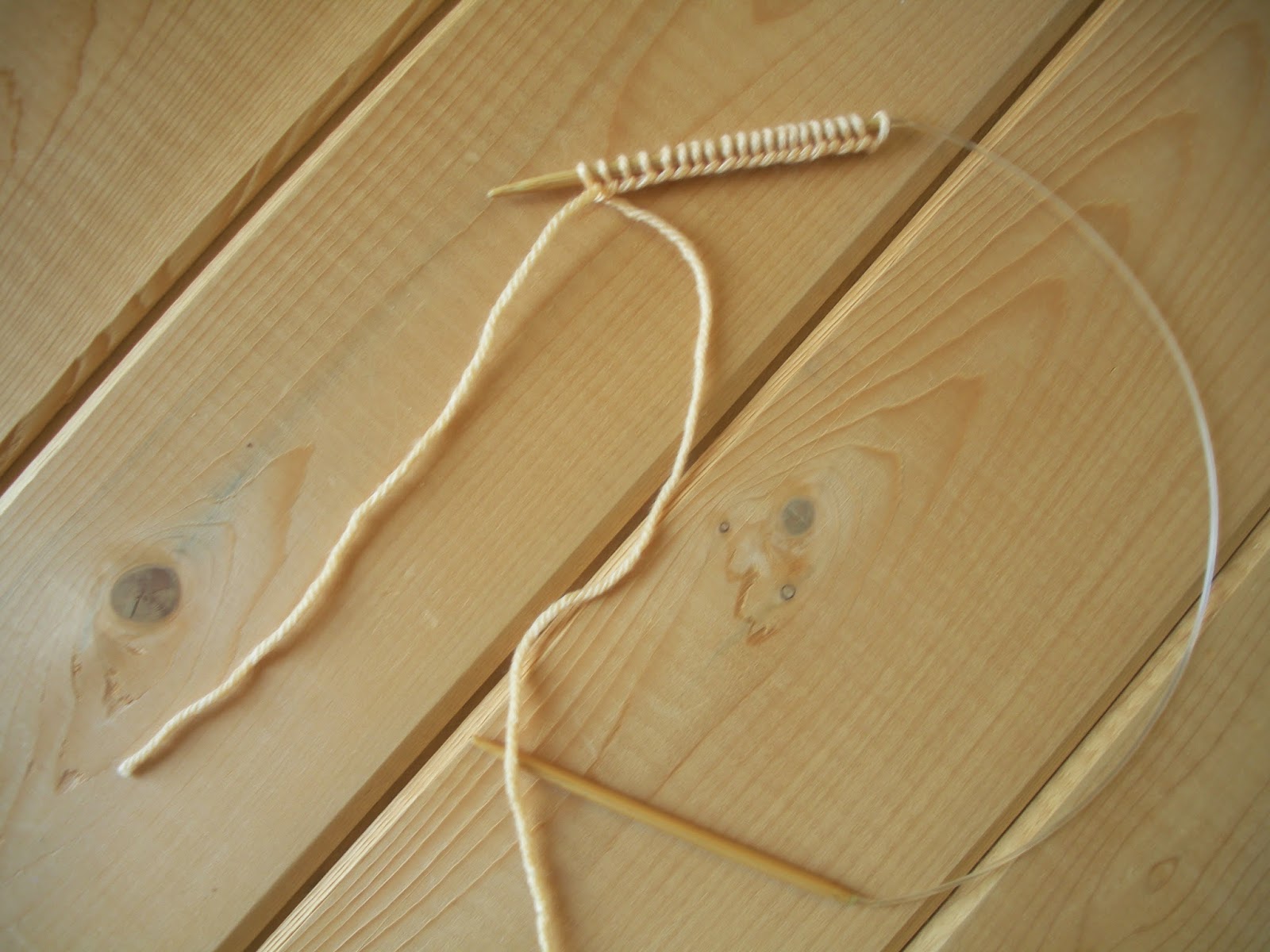 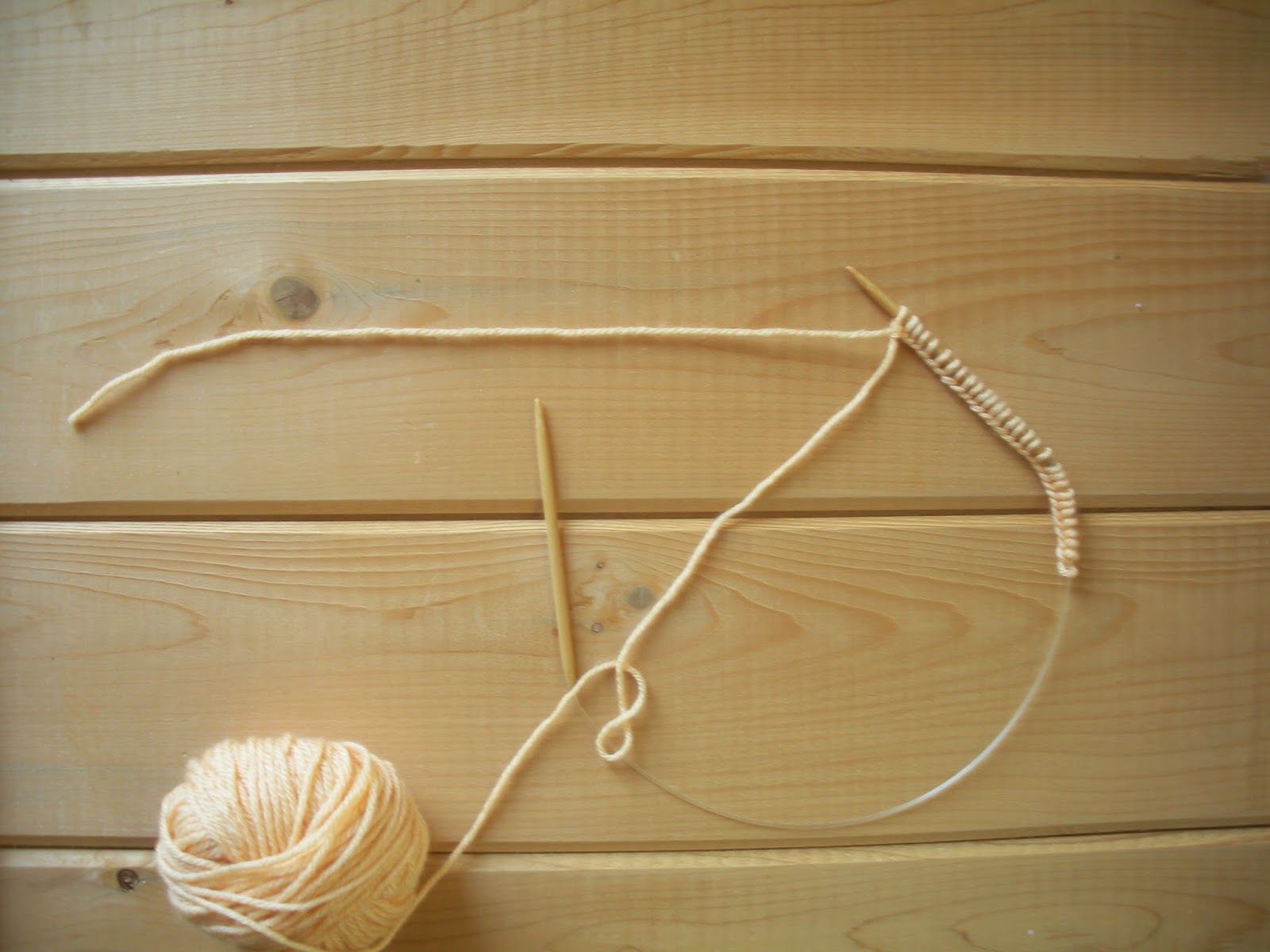 Next we have 30 stitches using the original formula above, and that tail is getting longer!  Imagine once again if you were casting on enough for a blanket!  You'd have a tail long enough to swing from vine to vine in a rain forest.


How about casting on 30 stitches with my revised formula?  Behold!  The perfect tail. 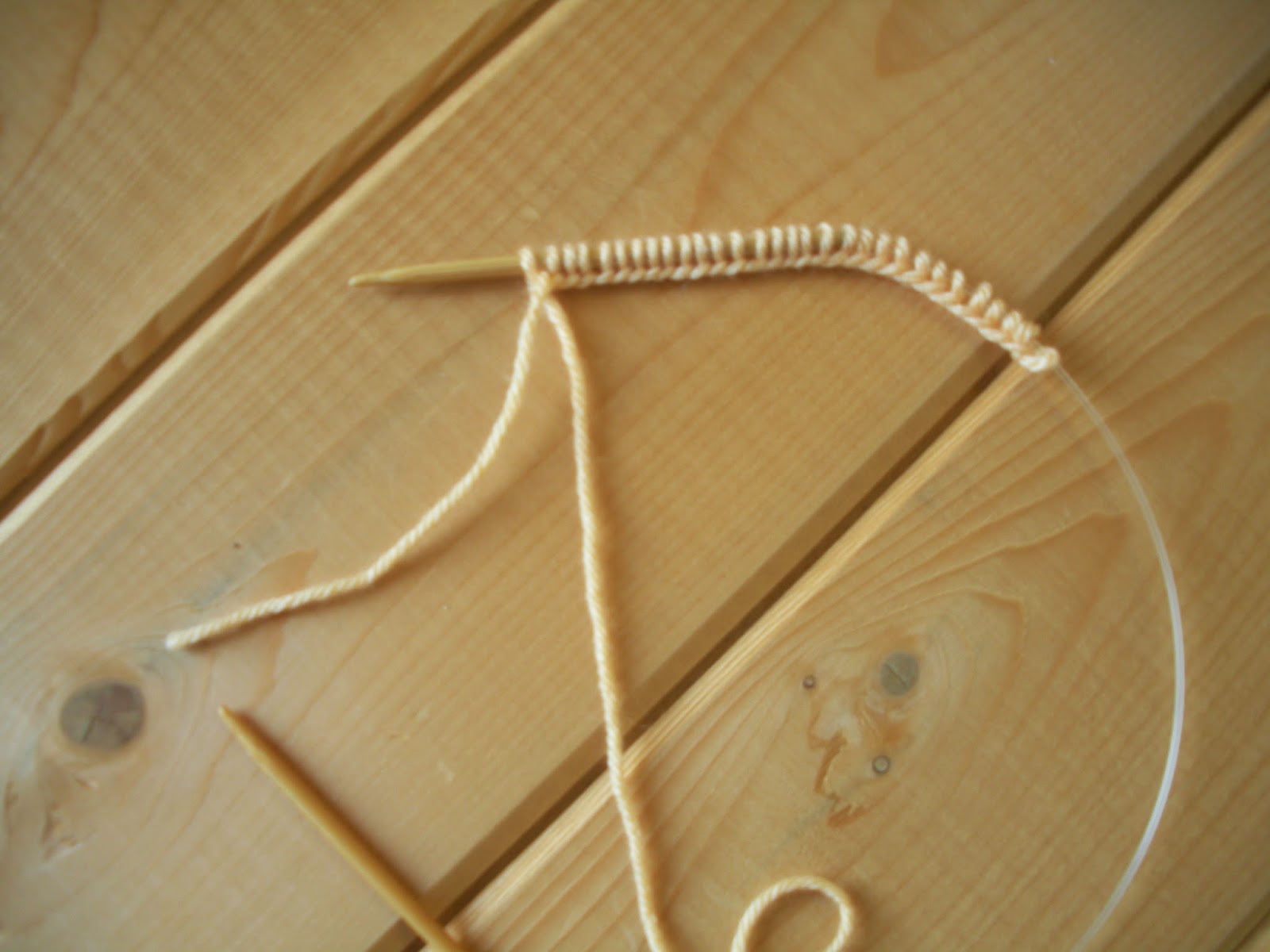 Now that I have led you, dear reader, through that mathematical song and dance, here are some other options.

How to Avoid the Dreaded Long-Tail Math:

Option 1:  Use the yarn ends from two balls of yarn, or the inside and outside ends of a single ball of yarn.  Tie the two ends together in a knot, then create a slip-knot and do the long-tail using both strands.  When you're done casting on, cut one strand, leaving a modest tail to weave in later, and proceed to knit with the other strand.

Option 2:  Cast on using the easy, stretchy (yet in my opinion, often loose and annoying) thumb cast-on.

Option 3:  Cast on using the stretchy yet firm and attractive crochet cast-on!  (You can tell by my exclamation point that I really like this cast-on!  But I am a crocheter and I don't find it difficult.  If you're new to crocheting, this cast-on could be excruciating.  My apologies to Lorrie.  You know!)

Option 5:  Use the knitted cast-on.

In case you're not familiar with some of these cast-ons, all are eminently google-able.  Googlable?  All are worth learning.  They all have their uses.  But sometimes, you just want to play cat's cradle like a long-tailed shrew.

Where Have All the Projects Gone?

The reason I haven't blogged in a while is that I have been busy designing this, that, and the other. 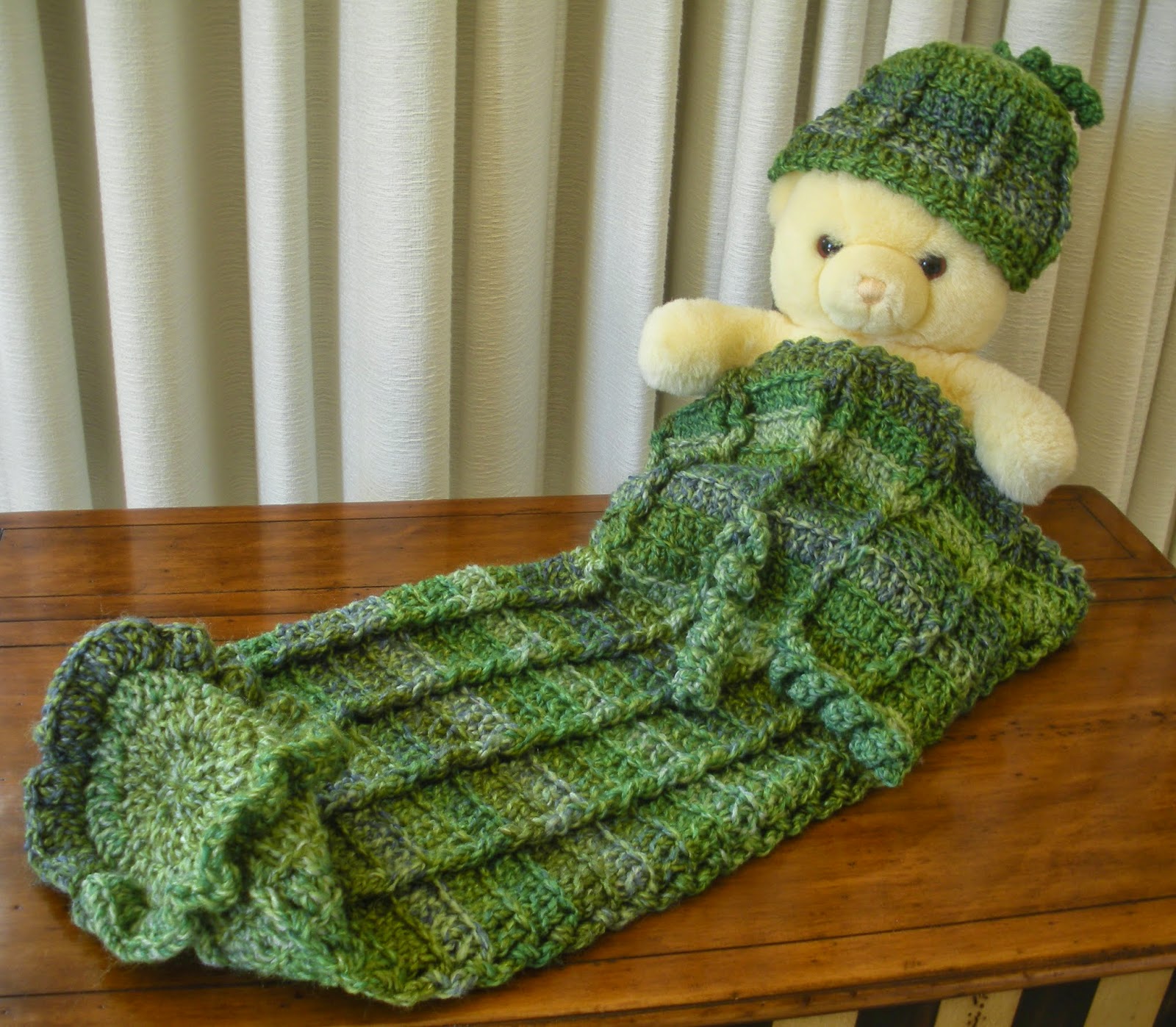 Two crochet projects being submitted to Storey Publishing for one of their upcoming 101 One Skein series books:

and below, a lace "cloud" of a blanket.

Wish me luck--I hope they make it into the book! 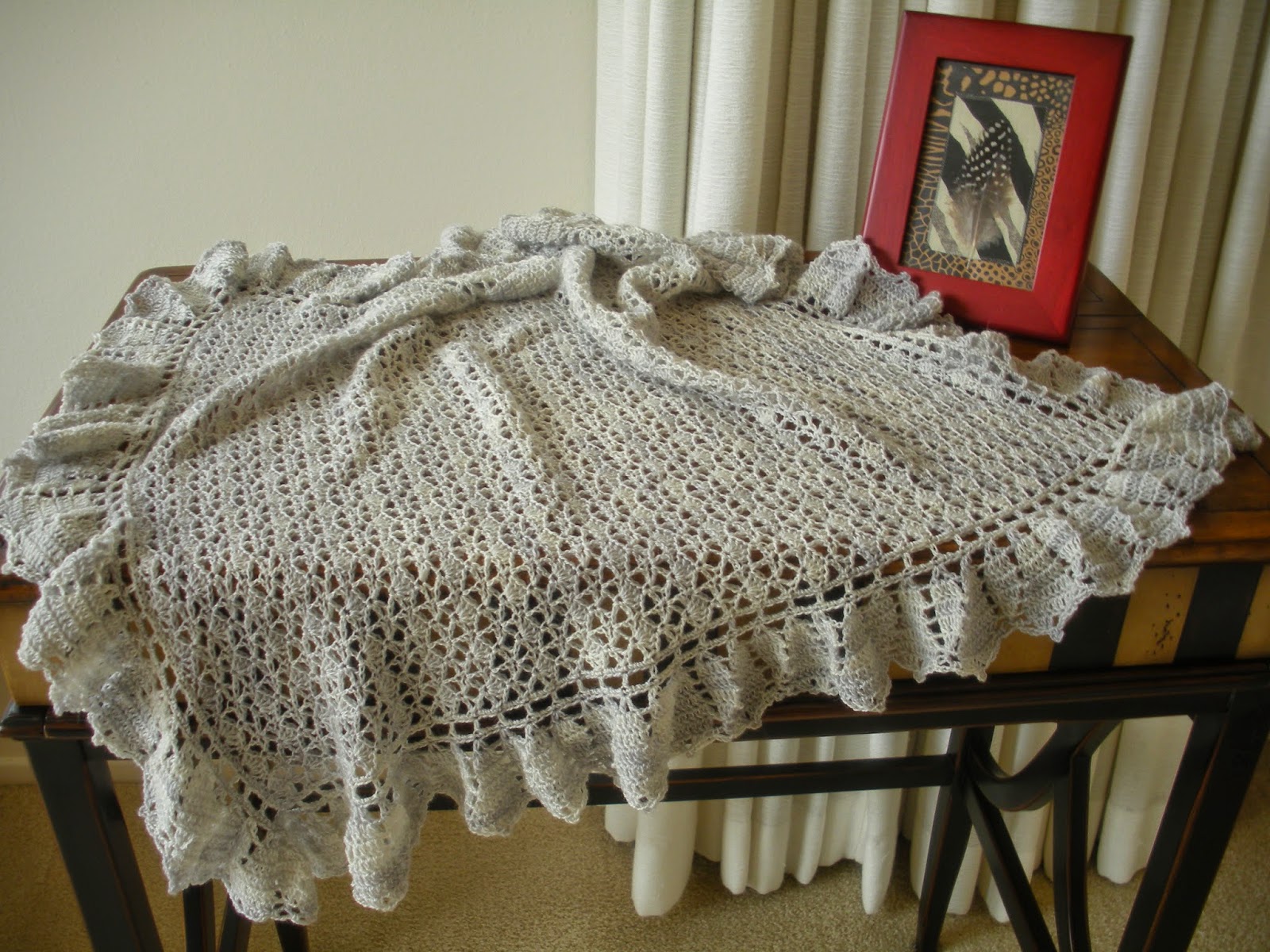 Submitting patterns to others, however, means a looming, brooding cloud of dreaded deadlines.  I kept trying to substitute the word "lifeline" in my mind, or "submission date" or "reception date," but I just couldn't fool myself.  It still felt like a deadline.  Cue the high blood pressure.

So I didn't let myself blog.  I hardly ever let myself spin, or quilt--I didn't finish my one UFO quilt a month "deadline" either!  Yikes!  It began to feel like a burden instead of a joy, so I told myself, "You don't have to finish the quilt.  Just finish the crochet patterns and get them out the door."

As of this morning, the pattern has been e-mailed, the "cloud" itself is off to Massachusetts by snail mail, and I have promised to reward myself with blogging and quilting and spinning like a wild woman, all the live-long day! 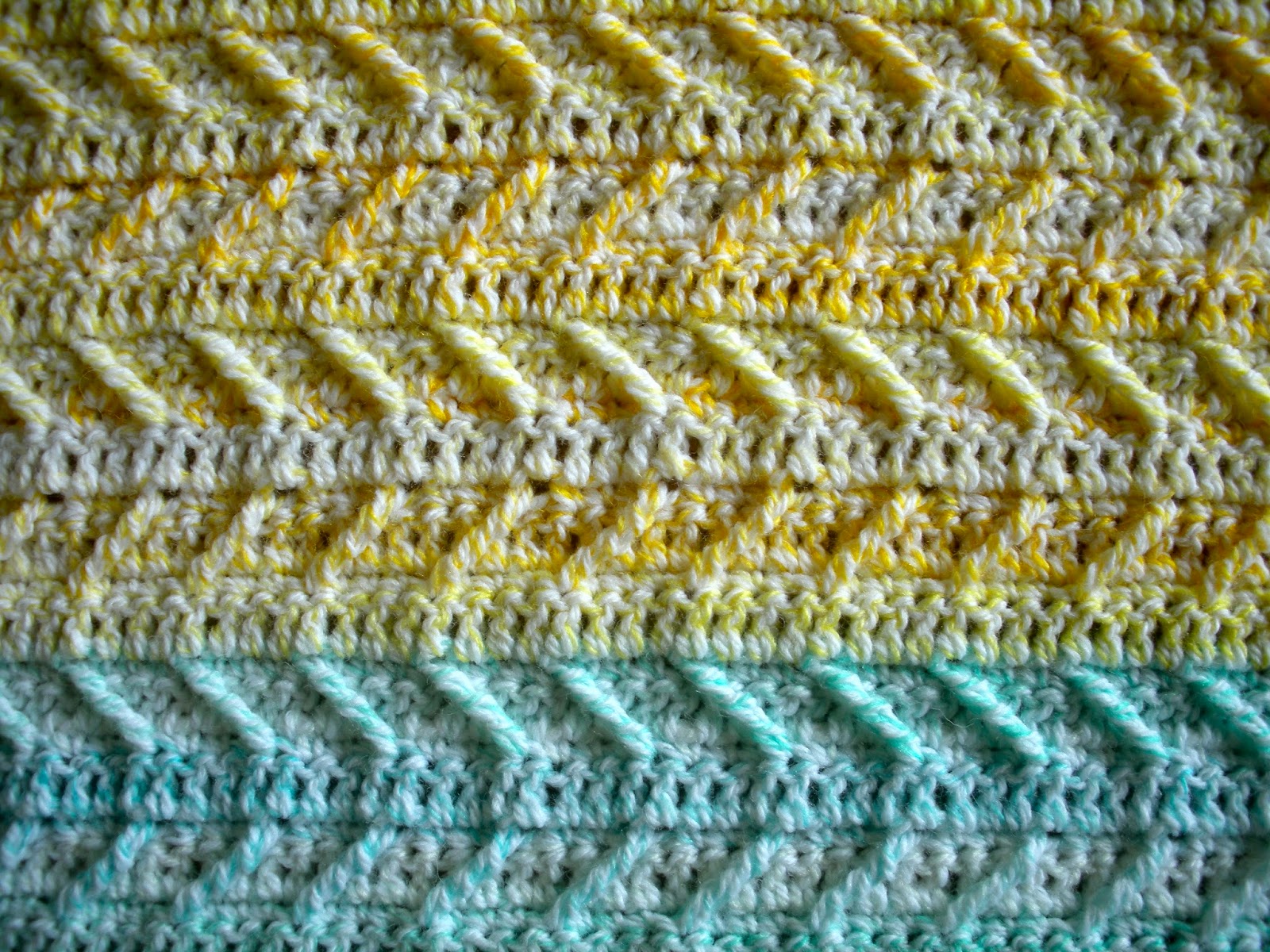 And before I go, here's a sneak peak at one version of a new blanket pattern I'm developing.  This is just the center; the border really makes it pop.

All will be revealed in due course, as will the new patterns!
Posted by captainhook at 11:46 AM 3 comments: