The cranky classmate would be me.

It was the day of the monthly Underground Railroad class, something I always enjoy.  But the glitches began in the morning.

I rebounded quickly when one friend, at the last minute, had to cancel meeting for lunch before class.  She was fine, she just wasn't making it to town.  I'm glad I found out before hitting the freeway myself.

I took a breath and quit racing around my apartment in order to leave on time.  I rebooted the brain:  I wrote a little.  I practiced my Spanish.  I prepped some snacks to take with me.  All was well.

Once in class, another friend, who is usually plenty early, was late.  And later.  And not responding to texts from our mutual friend, the teacher.  I managed to make 16 HSTs (half-square triangles) for the first block while, in the back of my mind, I hoped my friend was not in a car wreck.  Leave it to me to catastrophize.

She finally texted; she was sick.  Boo!  Hiss!  Sorry she was sick, glad she wasn't in a wreck.  Things could be worse. 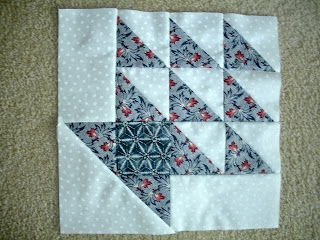 Then they finished their 2nd block as if this were the sewing Indy 500.  I kept telling myself, "Compare and despair!  Run your own race, dear," in as calm and soothing an inner voice as I could, but myself was replying, "Nope, I'm slow.  It's pathetic.  I should be better and faster."

Never mind that I wasn't the only one who wasn't finished.

It was doubly annoying because I had already made these blocks out of scraps at home.  I thought I should be faster because I already knew how to do it, sort of.  More or less.

I even complained about myself aloud.

Dear Teacher said, "It's only because you're being so careful and making it perfect."

Yeah, right!  But very diplomatic of her to say that, doncha think?

The annoyingly fast students were already packing up to leave class early.  Maybe they have been sewing more years than I have, but I didn't think of that at the time.  I just felt competitive and down on myself as I finished the Basket and went back to the Bear's Paw.  I really wanted to finish both so I could move on to another project at home.

I was using some less-than-satisfying fabric, anyway, and I was also annoyed because I had lined up my pink paws in a certain way, as I had done with my first Bear's Paw block.  Instead of piling everything together as outlined in the book, I had just done it my own way so I could make sure the subtle pattern of the fabric was facing the way I wanted.

But in class I wanted to try it the way the book said to do it, so things got unlined-up, as it were, and the paw fabric was not all going in the same direction, but danged if I was going to rip out all THOSE seams.

Meanwhile, I could see I had probably sewn part of one paw-to-sashing seam too scant (scantly?  scantily?), so the sashing in one row was not matching up to the other row.  But I had already pressed the seams, and was having trouble finding that one little spot where I would need to rip out and resew, so I tried forging ahead and pinning the rows together in spite of my better judgment, figuring I could fudge a little, because I was in a hurry.

Always a mistake, to be in a hurry when sewing/knitting/crocheting/spinning.

So I sewed the seam.  I knew better, but I did it anyway.  I hate it when I do that.

So now things REALLY didn't match up correctly, so more ripping out was clearly required, and I was feeling rushed and frustrated, even though there was plenty of time left in class.

Dear Teacher came over and began telling me how to pin the *!#$ row, and how to sew with the smaller row on top of the larger (excellent advice) and telling me how using a walking foot for piecing can be a real boon as well (more excellent advice) but that didn't change the fact that the previous seam allowance was wrong to begin with, and I seemed incapable of expressing that coherently.

By this time, I was just whining and mumbling grumpily, possibly just grunting wordlessly.  In fact, I was doing the very thing I can't stand when I'm teaching and a student does it:  they start being really hard on themselves.

Sometimes you have to admit defeat and retreat.  Live to sew another day.  Sometimes there are just too many glitches in one day.

I packed up, went home, went for a long walk, then finally, gently ripped out the offending seams, saw where the material had not matched up in just one little partial seam on one little piece.  Ripped that out.  Repinned, resewed, DONE.

Wasn't this hobby supposed to be relaxing??!!
Posted by captainhook at 3:16 PM