At the last Underground Railroad class, I kinda got stressed again.  I am a slower sew-ist than my other classmates, and although I got my first block, Shoo-Fly, done just barely in time, I was really lagging behind on the second.

One reason I was having trouble with the second block was that I was using some fabric I had been given awhile back, that I'm realizing probably isn't 100% cotton.  It's pretty, but it tends to stretch and slip and go wonky without so much as a by-your-leave, and it responds to pressing with a hot iron by ruffling slightly, when 100% cotton just gets crisp and smooth, and smiles up at you, happily awaiting its further journey into becoming a quilt.

Yet I continued to have this idea that I wanted to finish both blocks in class so as not to have to work on them at home.  Thus leaving me free to work on other projects. 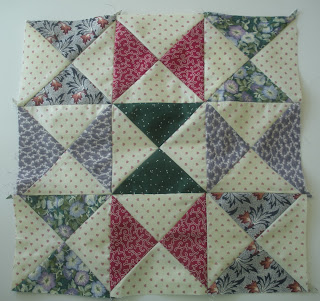 Well, think again!  So, I finished the second block at home, the Bow Ties.

See that background fabric, the cream with the little pink hearts?  It's so darling, and I HATE working with it.

I finally had enough!  I went through the remaining baggies containing all my fabric which is cut and ready for the remaining blocks, and I removed every bit of that and a couple of other similarly offending fabrics that had also been given to me, and I vowed never to work with any of this nasty stuff again!

I love getting free fabric, but sometimes, it just doesn't work out.

I recut pieces of different fabric to replace the banished stuff.

Meanwhile, our teacher had suggested we go ahead and make the half-square triangles we would need for the next class in August, so as to be prepared for more complicated tasks.

Determined not to fall behind again, I did that next, and then I thought, the other block we were going to do had Flying Geese in it, and I decided I'd better get a head start on those geese.  They can be kinda tricky.

But then, once I made the geese, it seemed to me that the rest of the block was pretty straightforward.  So I made it.  Geese, flying in all directions, DONE!

Then I figured the other block would be easy to finish too.  And:  DONE!

The more I thought about it, the more I realized that I already had twelve blocks, which is plenty for a decent-sized lap quilt.

There are a couple more patterns in the Underground Railroad book, but I'm not keen on doing the Drunkard's Path block, for example, which was slated for our September class.  I've done one before with a different technique, it's fine, but I guess I'm just not crazy about drunkards!

And I've made a sailboat block in the past, too; it's okay but not as appealing to me as the more geometric, mandala-like shapes.

Then there's the Northern Star block, which sounds very poetic, indeed, but I like Carpenter's Wheel better, so…?

So I decided I'm done.  I put my twelve blocks on the design wall. 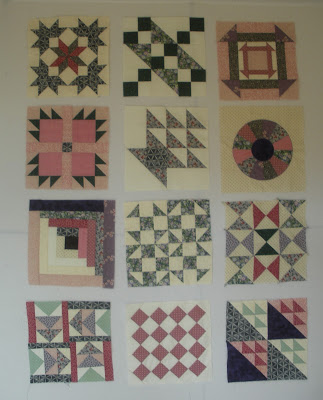 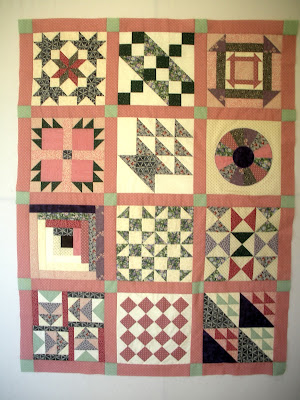 I pressed and cut and sewed sashing, and the top is DONE!

It's a little too pink for my tastes, but it's probably going to charity anyway;  someone will love it.

I have cut strips for the binding, and hemmed and hawed over what to use for backing so much that I've decided to wait to choose that.  Just some more cutting and pressing and sewing and pinning and quilting and binding--why, it's almost DONE!

Posted by captainhook at 7:53 PM