When workshops collide, they apparently generate a lot of heat.  This is clearly responsible, in part, for global warming.  Not to mention UFOs (unfinished objects, for those of you who don't know.)

I told myself I could handle it, as long as I kept the middle day free, to rest up, get some exercise, wash the dishes, or whatever else needed doing.

Little did I know that scheduling two workshops almost back to back could create our third major heat wave of the summer.

Here on the coast, hardly anyone has air conditioning, because we are all still living in a Past Paradise when we didn't need it.  We might have had three or four days a year that were too hot, and we would suffer through it knowing that the other 361 days of the year were perfect.

Many of the older buildings here are not retrofittable for air conditioning either, especially for us renters.

As the days marched suffocatingly on and the air quit cooling off even at night, I felt lethargic and headachy and just plain mean.  There were times when I couldn't even knit or crochet!  I was too exhausted from the heat, and I couldn't bear to touch anything yarn-like, even on top of the ice pack on my lap.  THIS HAS NEVER HAPPENED TO ME BEFORE!  I have knitted my way through many a heat wave, but I finally reached my limit.

I doused my head with water 20 times a day, and wore a cooling bandanna that has little gel beads inside that swell up and retain a tiny bit of cool (that was more or less useless).  I sat directly in front of the fan with an ice pack on my lap, and any time I had to move out of the range of the fan (like every 45 minutes when my ice pack was almost as hot as my sweaty body), I complained loudly to the Universe.

Even the thought of getting in the car to go anywhere that might have air conditioning (a movie theatre, a library, a Starbucks) was just too much effort.  Plus getting in and out of a 120 degree car--I couldn't face it.

Then came the first workshop.  Really fun patterns:  Strip It Three Ways by Nancy Rink.  I had a beautiful batik jelly roll--yay!--friends joining in the fun--yay!--and a fan or two that stirred the hot air around, mostly wherever I wasn't sitting.

We had three hot irons going full blast all day due to the need to press fabric constantly, because in quilting, when you sew a seam, you often need to press it before sewing the next seam.

I kept saying, "I don't think I can take this.  I might have to leave early." 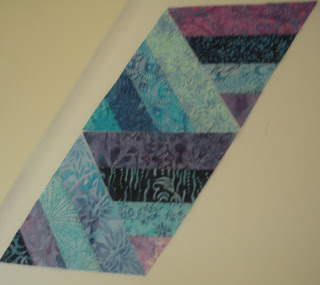 My friend Judith gave me a banana.  The potassium helped!  Not to mention someone caring that I felt like crap.

The weather was a major topic of conversation for everyone, not because we had nothing else to discuss, but because we needed to talk about the experience in order to survive it better.

Saturday I sat at home in a stupor, barely able to move, with wet hair and ice pack(s).

(Have I mentioned yet that it was HOT?)


Then came the Sunday workshop, in a beach town that is usual several degrees cooler than my home town, so I thought, "This'll be great, what a relief."

Turns out, not so much.

It was a sweatshop.  The sea breeze was on vacation in Hawaii, I guess.  We had one heavy yet inefficient fan that had a way of twisting and turning on itself until it was facing the wall, so we had to keep unraveling its cord and trying to lug it several inches around to face us again.  Hilarious!  (Curse, moan, shake fist at fan.)

And three hot irons going full blast all day due to… you know the drill!

I kept saying, "I'm not sure I can take this much longer.  I'm going to have to leave early."  Several times, I sat back, overwhelmed with the heat, the sweat pouring off me, completely unable to function.  I felt like my brain was parboiled. 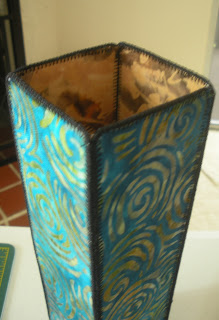 My friend Elisa, who has lots of experience dealing with whiny children and grandchildren, got up and helped me move my sewing station closer to the fan, which was also closer to her, which was way more fun than where I had been forced to sit at first, next to someone who tends to be even grumpier than I was (I know, that's hard to believe), because I had arrived late, which I would also like to blame on the weather, because I was so lethargic I couldn't load my car and get on the freeway any faster.

I have apologized to my friends for whining and complaining endlessly about the heat, but they all say, "Oh, I hardly noticed," or "I didn't hear you complaining."

They are so darn sweet!


So I stuck it out, and learned some new skills, and managed a laugh or two.

And behold, it has gotten a few degrees cooler each day for the past 3 days, and we've even had about 217 drops of rain!

I have some beautiful new projects to work on, and one finished vase.  I almost feel human again.

Posted by captainhook at 2:56 PM