Good-bye to the Bunny

Recently, I was invited to join a satellite group of our quilting guild, something I have wanted to do since I joined the guild.

For those of you who don't know, satellite groups are smaller groups of members who meet outside the regular guild meeting.  They usually have a specific goal or common interest, like modern quilting, or hand quilting, for example.  I thought it would be a great way to make new friends.  But whenever I asked about them, all the satellite groups were full, and trying to start a new one proved to be a slow and tedious process that resulted in nothing.

I was pleased to be invited at last (apparently someone had to drop out, so they had room for a newbie.) I looked forward to meeting everyone, and I was very happy that one focus of this particular satellite group is helping Community Projects, a.k.a. charity. 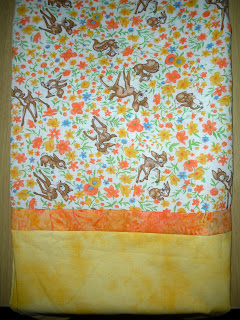 Little did I know what I was getting into!

Because it is That Time of Year.

It turns out that, for a holiday project, we were each supposed to make either a Christmas stocking (not gonna happen) or a pillowcase, and put a little gift in it, and wrap the combo up, and then we were to exchange gifts at our next meeting, unwrap them, ooh and ah over the general adorableness of everything, and then donate it all to charity.

That last part I liked, the ooh-ing and ah-ing, and the donate-y part.  The rest, in all honesty, seemed like a lot of bother.

Every year at this time, I become even more of a curmudgeon than usual.  It's the four-month long frenzy of commercialism that annoys me.  It starts before Halloween now, and doesn't end until after all the after-Christmas sales.  It seems less like a religious or spiritual holiday than a business model.  Not appealing.

Add the fussiness of making a small project when I have fifteen other projects that truly excite me, and I become a Negative Nellie of the first degree.  ("Making it and then wrapping it?  So one can unwrap it, when it isn't even a gift for oneself?  Why?"  The Curmudgeonatrix hath spoken!  Or rather, hath thought, but hath kept her thoughts to herself.  Until now.)

But, I wanted to be part of the group, and I didn't want to rain on everyone's parade, and I like making things for charity as a rule, so I says to myself, I says, Suck it up and make a pillowcase, for heaven's sake!  Aloud, I just said, "Okay," and tried not to grimace too much or be snarky.  (I'm clearly making up for that here!)

I scavenged in my stash, found some free fabric (thank you, Sonja and Rhona), added a little of my own batik for spice, and followed the simplest pillowcase pattern I could find.

The result is cute enough, I think, and for the gift that went with it, I had the perfect knitted item already to hand:  Herbie Bunny.  I made him awhile back when I was teaching and all my students were making these bunnies, and I wanted to be able to help them, and it is in fact a very easy bunny to make (click here for the link to the free pattern). 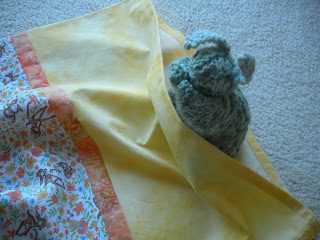 But I am ready to release him into the wild, because around here, he has become simply another thing to have to move in order to dust.  (Curmudgeonly?  What, me?!)

Some child needs to cuddle him.  So say good-by to Herbie Bunny.  Safe travels, my friend! 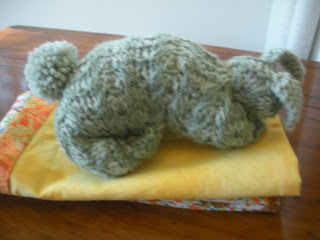 Posted by captainhook at 2:51 PM No comments:

When laying out pieces of cut fabric, in preparation for sewing them together, it is inadvisable to place one's full cup of coffee beside them, especially if the table one is using is a TV tray that can easily be jostled.

Especially if there is not much room between TV tray and cutting table.  Especially if one has Quilter's Butt, from sitting around sewing.

Especially if one's fabric is white.

Which leads us to Quilting Tip #248:  Always buy more fabric than you think you need. 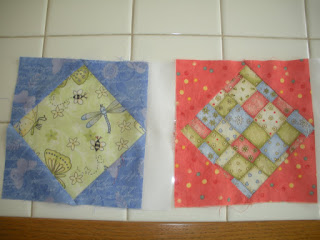 The blue and orange rinsed out well in cold water and a little soap, but let's just say that it's a good thing I had a little extra of the white.

This has been "Lessons Learned the Hard Way," a Public Service Announcement brought to you by Yarn In, Yarn Out and… coffee.

Posted by captainhook at 5:27 AM No comments:

Awhile back, I heard tell of people throwing leftover scraps, strips, and strings of fabric in bags and just pulling out pieces randomly and adding them to a project.  The stuff of legend!  Of fantasy!

I'm much more of a planner by nature, but it sounded like fun to be more spontaneous.

I had been wanting to try piecing a wonky log cabin, and I finally had a day free.  I pulled out my box of scraps and began. 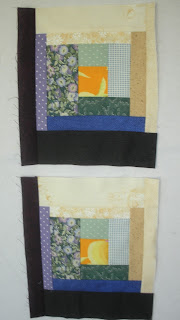 At first it was a mix of fun and frustrating.  I wanted to make 12.5 inch squares, and it seemed to take longer than it ought, considering there was no pressing with the iron, no measuring, and I was being so random and supposedly carefree.

Alas, there were simply not enough pastels and neutrals to realize my vision, such as it was.  These two not-quite-squares are now in my "good heavens what shall I do with them?" box.

I then tried some wonky patriotic-colored log cabin blocks with the same planning-free approach, but it still took so long to put together a 12.5 inch square, I was beginning to get a little annoyed.

Kicking over the traces was not as much wonderful fun as it was made out to be. 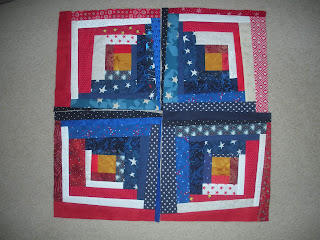 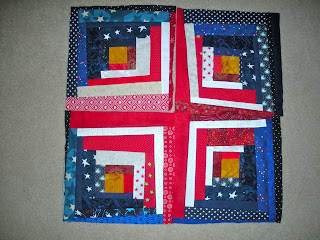 It was good to get out of my comfort zone, but I soon headed back in.  At least partway.  More structured patterns for me!

These blocks were donated to the quilters' guild and became someone else's problem.

I did find that the random method works great when doing what are essentially half square triangles. 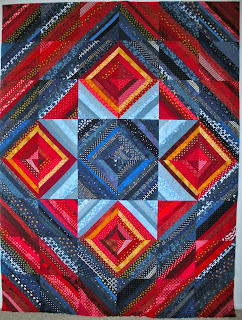 The deal is, you separate the different basic colors, tossing the scraps into separate bags, for example, the reds with the reds, the whites with the whites, and so on.  Then you sew them onto a muslin or paper backing.

I had started out by laying all the scraps out on a table, which gave me way too much opportunity to be picky.

With the bags of scraps, I couldn't really see everything that was available, so I learned how to grab strips randomly, telling myself frequently, "Don't think too much, don't try to organize."

This was much faster than making those log cabins. 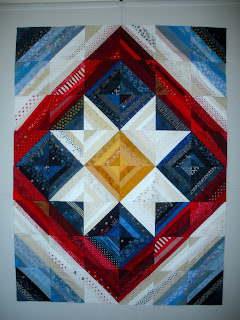 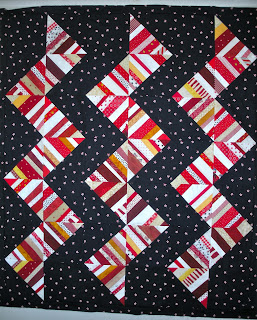 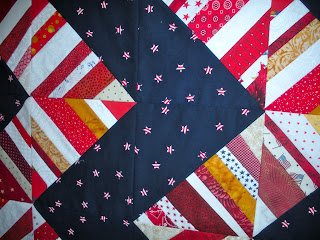 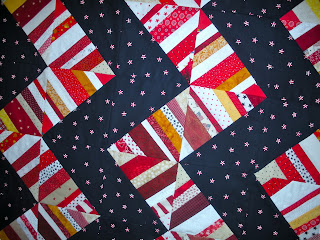 These three--the two patriotic star quilts, and the "lightning" one--all went to veterans.

I have an idea, using different colors but the same technique, for a kid's quilt.  I'm building up a stash of different colored scraps before I begin.  Yes, true to my nature, I have a plan!
Posted by captainhook at 3:03 PM No comments: