Who knew that a giraffe would be my nemesis?

When I first started hoarding donated fabric for this charity quilt several years ago, I didn't really know what pattern I would use, I just knew I wanted to do something with a variety of jungle-themed fabrics that seemed to leap into my hand despite a prevalence of tans and browns, which are not my favorite colorways. 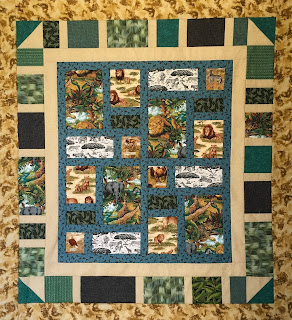 Eventually I ran across the (free!) Serengeti pattern by Jinny Beyer.  I love her fabrics and patterns, btw.

A few months ago, I finally got around to making the top, adding some extra borders (in order to use up more fabric, darn it!  I'm running out of storage!), and piecing a back big enough to quilt on my friend Debbie's longarm quilting machine.

Yesterday was my second time playing with that machine.  Debbie did all the heavy lifting--squaring and pinning and otherwise securing back, batting, and top, bobbin-ing and threading and everything else.

We chose a jungle-themed pantograph, and away I went, following the little laser light along the lines.  (I know that sentence won't make much sense to anyone who has never used a longarm, but it's kind of hard to explain, so...sorry!).

But the thread kept breaking as I neared the giraffe's horns.  They were much smaller than most of the pattern, and apparently I would slow down too much and then snip-snap-crunch, the top thread would break and instead of quilting, I would just be making little needle-sized holes in the quilt.

Then Debbie had to come back, fuss with the threads to prevent knotting on the quilt, re-thread her machine, and then, off I went to the races until the next giraffe.

Blessings upon Debbie for her patience!  She's even going to put the binding on!

I arrived at her place with two big bags full of quilt top and back, scraps from a bunch of charity quilts I've already donated, and a bag of old shirts that were fraying.  (Debbie and her friends are filling pillowcases with shredded fabric and making pet-beds for local animal shelters.  Nothing wasted!!)

And I left her place four hours later with NO BAGS AT ALL!  It felt good to let go of some stuff.