Free Pattern: Rib It! November Block of the Month 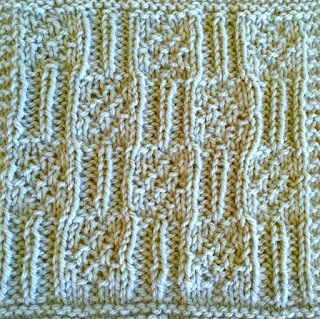 Although the row repeat for this pattern is long, there are no fancy stitches, just knitting and purling.

As always, the finished size is 8" square, and directions are included for adapting to other sizes.

Be sure to join the free knit-along, the Rib It Blanket KAL, on Ravelry, so you can chat with other knitters and post photos of your blocks.  I would really enjoy seeing them.


For the other free Rib It! Blocks of the Month, click on the Free Knit Patterns tab above and scroll down to Rib-It! for the links.

You can also buy Rib-It!  A Knit Sampler Throw, Parts 1 through 4, which include many more blocks that go with this one, in my Etsy shop--click here.  Or buy them on Ravelry--click here.

MOSS & RIB
The stitch pattern is a multiple of 12 + 7.  To make a larger or smaller square, CO more or fewer sts in multiples of 12.

Posted by captainhook at 9:23 AM