You'd think someone like me, who has roughly 2000 sets of knitting needles--okay, I'm exaggerating, it's 200, max--would easily have the perfect needles for making any project under the sun.

You would think that, but you would be wrong.  (It's not your fault.)

It all started last spring, probably, when I was trying to find a good travel project for the inevitable looooong trip back east to see the folks.  I wasn't going yet, but I knew I couldn't put it off forever.  (I love my folks, I just hate to travel.)

So, I thought I'd prepare the most important part of packing ahead of time:  the travel knitting or crochet project.  Something small and portable, fairly untaxing to the brain, but not utterly boring.

I settled on the Holden Shawlette designed by Mindy Wilkes, a beautiful pattern I've had in my queue for several years.  I found a suitable yarn in my 2000+ skeins of stash--okay, maybe not 2000, maybe more like 1950--and I went to find a #4 circular needle.  No problem, right?

So I led myself to believe.  I told myself, "It doesn't matter that the yarn is very dark and the wonderful Lantern Moons are ebony, i.e., black.  It won't matter that the light in the airport, airplane, hotel, and/or parents' den is not all that bright.  I'm a good knitter, this is not a problem."

I cast on and got the project just barely going, and stuck it away in a bag for that fateful day when I would have to face the dreaded so-called "vacation."

Several months later, travel time could no longer be avoided, so I pulled the project out and gave myself a quick refresher on what I was supposed to knit for the first 88 or so rows.  It's very simple, a breeze for an Accomplished Knitter such as myself.

I ignored the still, small voice within that said, "Um, excuse me, I don't mean to trouble you, I know you're stressed out about making travel arrangements, but this yarn is quite dark and the needles are black, and are you sure you want to commit to this combo?"

I refused to pay attention.  Off I went on my travails--I mean, travels--and I did a bit of knitting here and there.  Literally, here and there.  And along the way, I realized that with the shoving of the project in and out of my carry-on and/or purse, and working on it for five minutes or half an hour in this or that plane/hotel/den, that I had completely lost count of what row I was on, despite the use of a row counter, because I forgot whether I had decided to count rows or count repeats of a 2-row combination.

Funny thing, I was off by two stitches.  Every increase row was supposed to add four stitches, but I was not.

By this time, I was home again, having successfully navigated four different airports and three hotels, and I even had a little fun along the way, mainly while seeing Mom and Dad, who are a kick.

At first, since I couldn't find a dropped stitch anywhere, I thought, "I'll just keep going and add a couple of stitches, it'll be fine, it isn't going to unravel, and no one will know."  But it bothered me.  The still, small voice knew, and not only would it not let me forget, it was still going on and on about how dark the yarn and the needles were.  (That still, small voice can be a real pain in the patootie sometimes.)

Finally, I decided to frog a few rows and see if that took care of the mistake.  I just slid all the stitches off the needles and ripped out an inch or two of my knitting.  Getting the stitches back on the needle took a little time, because, y'know, the needles and the yarn were so dark, and then I was still off by two stitches.  I considered ripping the whole thing out and starting over, or giving up entirely.  Cursing was involved.

This is not the fault of the pattern, btw.  It really is easy.  This was all my own stubborn fault.

I bit the bullet and got out my 47" Addi Natura needles, which are light in color, but way too long, and I tinked.  In other words, for those who don't know, I unknitted, which takes just as much time as knitting but you're going backwards and have nothing to show for all your work.  This is, of course, insane.  But I kept thinking, "Just one more row and the mistake will be revealed."

I told myself, "Eventually I'm going to have to travel again, and this will be my project, because obviously I'm not finishing it any time soon."

I told myself, "It's the process, not the end result;  the journey, not the destination."  In other words, I continued to lie to myself.

After tinking away for awhile, I was still off by one stitch.  How odd.  I decided more frogging was in order.  Off the needle, ripping out lots of rows, then back on the Addi Naturas, and lo!  There was a chorus of angels singing in the heavens!  There was dancing in the mental streets!  I had an appropriate stitch count.

And then I did the craziest thing of all:  I walked a few blocks up the street to my local yarn store and for a mere ten bucks, bought a set of Knitters Pride Naturalz, 32" long #4 circulars, nice and sharp at the tips, and light enough to work with this yarn.  The cord is black, but that doesn't matter;  I'm not knitting with the cord, just the needles.  And this is what the project looks like today, after probably at least 20 hours of work, and I am not exaggerating about the hours: 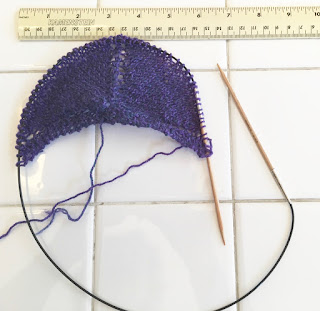 I know you're laughing at me right now.  Don't pretend you aren't!
Posted by captainhook at 3:28 PM No comments: 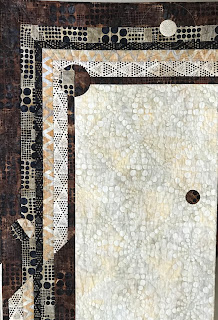 I joined a new fiber arts group last February called Fibervision.  (Click on the name to learn more about the other member artists.)

I'm calling mine "Eclipse."  There's a little machine piecing, a little hand appliqué, and a lot of straight and free motion quilting, which doesn't show up unless you get close.

This was my October finish-a-UFO-a-month project as well.

I'm pleased with how it turned out. 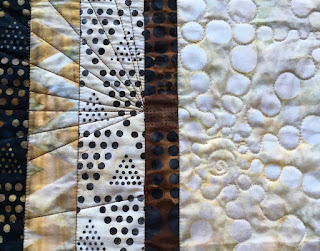 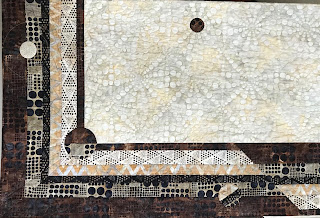 But at the moment, it's living on one of my quilt racks and hasn't even made it onto a wall.  This is mainly because I have limited wall space, and the space I have is hard to get at (as in, over my heavy desk.)  I'm sure I'll get around to displaying it eventually.  (Do I need a "display-a-project-a-month" challenge too?!  Heaven forfend!)
Posted by captainhook at 1:57 PM No comments: 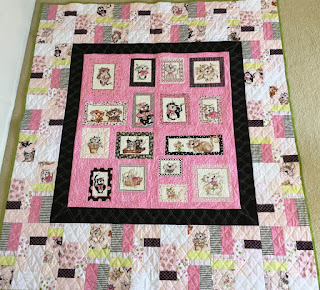 One of our quilt guild members has made a commitment to finish at least one UFO (UnFinished Object) a month.  I've decided to follow her example.  Of course, I start at least three more projects!  But, progress is being made. 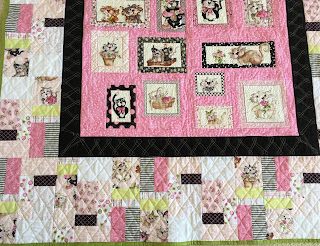 I started the Fancy Cats quilt in August of 2016, and the top and backing hung in the closet for months, waiting.  I finally finished it in October 2018.


I started Fairy Tale Confection ages ago, even before Fancy Cats.  Finished it in November 2018 (although it still needs a label). 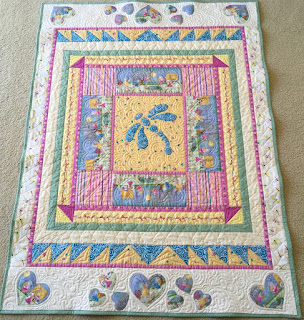 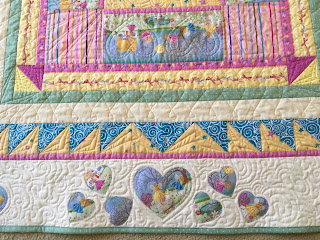 A Shawl is Coming

A new crocheted shawl design is coming soon.  I've been playing around with a prototype, and plan to grab some more yarn, and take better notes while making the real thing. 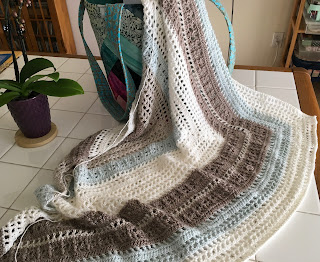 I've gotten lots of compliments on this along the way; I think it's the beach-y, soothing colors.  The next one is going to be a little more dramatic, color-wise, since that’s what I have in my stash.  This one still needs to be blocked.  All in due course.
Posted by captainhook at 7:20 PM No comments: