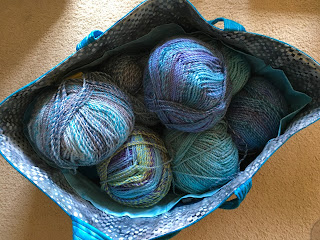 This bag of Marble Chunky yarn has been sitting in my office for months, looking luscious.  It's a "yum of yarn," like a flock of birds, or a pride of lions.

There are four different color ways in there, and a long time ago, I had a design idea for using all of them together.  I've worked on this brilliant idea sporadically, and it just never quite comes together.  Maybe I'm not in the mood.  Maybe it's not that brilliant.


I finally decided to use color way MC32 for a River's Edge Ripple throw, only instead of crocheting strips and sewing them together to get a vertically striped blanket, as in the original pattern, I am letting the gentle flow of color changes in this wonderful yarn speak for themselves. 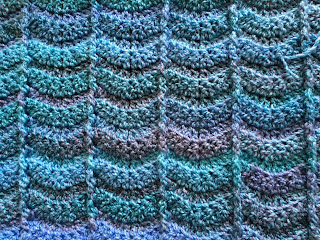 With an "I" crochet hook, I chained 112 to begin, a multiple of 9 + 4, and then followed the directions for a strip of River's Edge all the way across. 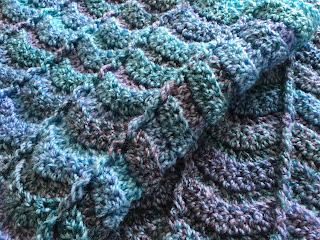 I'm loving the result so far.  The pattern repeat is only 2 rows, so it's mindless crocheting for me.

I will probably add a narrow border to the sides to finish it off.

If all goes well, the finished blanket will measure approximately 42" x 48" using 4 balls of James C. Brett Marble Chunky.  It's all acrylic, machine washable, so start your crochet hooks now!
Posted by captainhook at 5:28 PM No comments: 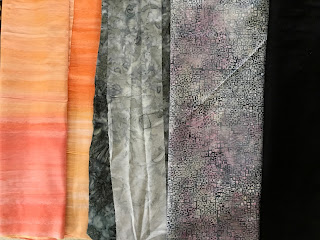 We did it!  And fit in a couple of extra stores along the way, because they were so close to the ten shops on the CCQS tour.

I got four batiks I have earmarked for certain projects, including a mostly black one that will work for all kinds of things.


I got some other batiks Just Because.  They look pretty garish all together!  But they will go in different projects (some day.) 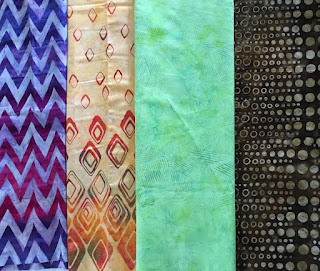 Then the fabrics I needed/wanted for a big English Paper Piecing project that is maybe halfway done.

And more fabrics, two of which go with projects in the queue inside my brain, and two of which are Just Because. 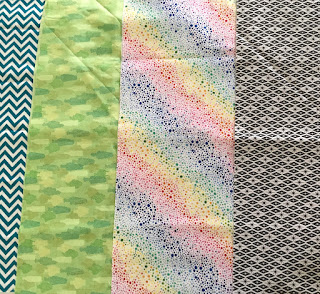 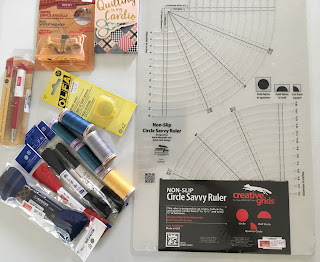 I love the 3-color Bohin marking pencil, and needed another one to go in my hand quilting bag-of-tricks.  The circular cutting tool from Creative Grids was on sale, half price, so who could resist?  Well, my friend resisted:  she handed it to me!

Not pictured: some stiff double-sided fusible for another project I have in mind.


Along the way we all got freebies, which we love, including little patches to sew on things (which I probably won't, but they are cute), a kit to make a pincushion, a batik mini-charm pack, and sew on and sew on.  Plus, some very handy little scissors, which were the prize for going to all the shops and turning in your stamped passport. 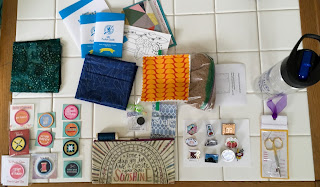 I have decided I can't go shopping again until I finish at least six projects.  We'll see how long that idea lasts!

For those who are wondering, I promise I will get back to blogging about some yarn-y stuff soon.
Posted by captainhook at 10:59 AM No comments: