Selvedges and Their Annoying Cuteness

Have I mentioned I have a lot of fabric?  I believe I may have let that slip once or twice.

Do I really need to be spending time making things using selvedges, the roughly 3/4" wide sliver of more densely woven fabric at the edge, that we trim off before using the actual fabric?  No, don't be silly, of course I don't.

Yet sometimes selvedges have interesting symbols on them, or pretty dots, or just more of the beautiful pattern of the fabric itself.  I didn't really think about that when I first started quilting.  I considered selvedges scraps and threw them away, until I took a workshop a year or three ago from a woman named Kristin Otte, who creates really beautiful objets d'art using selvedges.

And we hate to be wasteful, right?  Didn't Mom teach us, "Waste not, want not?"  Of course she did.

Using a stiff, double-sided fusible interfacing and a bunch of selvedges, many from Kristin's stash, I made this little wallhanging in class.  To me, it looks like an Easter egg. 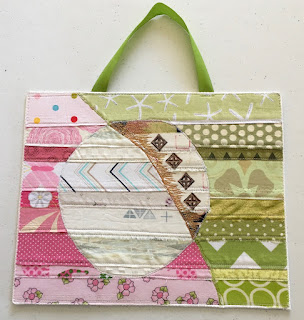 After that, I couldn't resist hanging onto selvedges.  I had a plan to make a big, impressive project that, once I started it, was taking way too long, and getting boring and irritating.  So I gave all my selvedges to Kristin.

But then, there were more.  Because I kept making quilts and wallhangings.  Some selvedges are too darn pretty to throw away.

I decided on a smaller project, and I did finally make it.  It hangs in my office and is a good reminder to remain calm.  Especially in the face of the tons more irresistible selvedges I keep collecting. 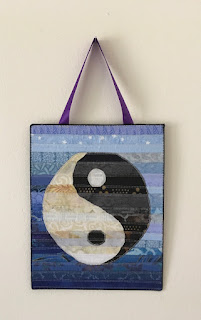 I toy with the idea of making something else with them, but I have so much fabric, I think I'm ready to stick with using bigger pieces.  Kristin may be inheriting more "scraps."

Posted by captainhook at 3:48 PM No comments: Links to this post