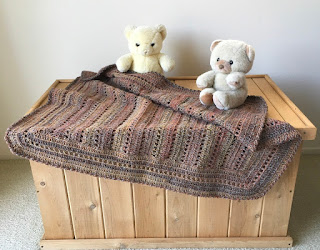 Here’s another redo, this time of a free pattern I offered early on in my blogging.  It's called Monsoon’s Blanket.

It worked so well for our rescued cat, Monsoon, I thought it would have magical, calming properties for all cats everywhere.  Leave it to me to make assumptions, joyfully and unscientifically.

So I made another blanket, a bit smaller, for a good friend's new, but previously somewhat badly used, rescued cat.

This cat reminds me so much of Monsoon.  I'm told she meows a lot, craving attention, but apparently, she also fears it.  She'll purr and let herself be petted for about a second and a half, and then--watch out!  She bites!  She might deign to leap into my friend's lap, but only briefly.  Pick her up, and she wriggles mightily to escape loving arms.

So I made the blanket, and I was told the kitty did lie down on it right away.  I seem to recall being told she even purred, but that may be wishful thinking.  Perhaps she napped.

It has been several weeks, and so far, though she does sleep on it from time to time, this one cat continues to be resistant to the magical healing properties of the blanket.  She still bites.

Of course, it took Monsoon a long time to recover, too, so there's hope.  At least I used up a few leftover skeins of yarn.  Stash shrinkage has occurred!  Maybe I need to make this kitty a bigger blanket.  That could work for both of us! 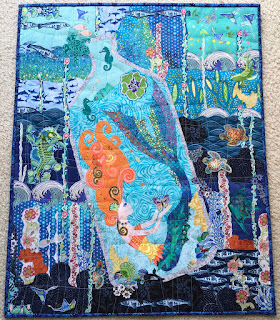 I took a Guild workshop from Janis Rivera in February, using Laura Heine's fabric collage technique.  I've had one of Heine's larger patterns for years and haven't gotten around to making it, so I jumped at the chance to have some hands-on, in-person instruction from Janis.

I managed to keep going on the project when I got home, determined not to add to my UFOs.

You can't see all the bling on this thing in the photo, but it was a great excuse to play with the hot fix crystals again.

Now this mermaid hangs in my hallway, glittering mysteriously whenever I walk by.
Posted by captainhook at 3:17 PM No comments: